With daisy-like blooms that last for weeks, these prolific wildflowers bring nonstop color to the late-summer garden By Anne Balogh 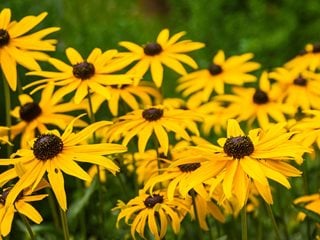 Right on cue during the dog days of August, black-eyed Susans (Rudbeckia) illuminate flower gardens and open fields everywhere like bright rays of sunshine. If any plant could be the poster child of late summer it would be this one. The brightly colored flowers in cheery shades of lemon-yellow, orange, and gold bloom for weeks with minimal care. They also attract a continuous procession of pollinators, bringing even more color and vibrancy to the summer garden.

Although black-eyed Susans have often been dismissed as common wildflowers, the National Garden Bureau put them in the spotlight as first-rate garden plants by declaring Rudbeckia the plant of the year in 2008. This well-deserved accolade has led to the development of an impressive array of garden cultivars in a complete gamut of heights, colors, and forms. These new-generation Susies offer greater flair and versatility, making them suitable for settings ranging from prairie-style plots to urban gardens.

Rudbekia is a member of the sunflower family (Asteraceae) and has similar daisy-like flowers. Although black-eyed Susans are also called coneflowers because of their cone-shaped heads, they should not be confused with purple coneflowers (Echinacea purpurea). Both flowers come from the same plant family and require similar growing conditions, but the color and appearance of the flowers differ. Confusion also arises when gardeners come across the black-eyed Susan vine (Thunbergia alata). This unrelated Rudbeckia look-alike is a tender, warm-climate perennial native to Africa.

Varies by species, but the typical range is 3 through 9.

Plants have a long bloom period even without deadheading, typically flourishing from late July until the first frost. Some cultivars, such as ‘Early Bird Gold’, have extended bloom times and will begin flowering in mid to late spring.

Varies dramatically, anywhere from 10 inches to 7 feet, depending on the cultivar.

Flower sizes range from 2 to 9 inches wide and can be single, semi-double, or fully double. The petals range in shade from bright yellow to orange-gold, and some cultivars display flushes of red, bronze or mahogany. The flower's eye, or center, is actually more dark brown than black, but some cultivars, such as ‘Prairie Sun’, have green centers.

There are about 25 species of Rudbeckia, all native to North America. Many species are actually biennials or short-lived perennials but because they self-sow readily, they often return each spring from seed dispersed the previous fall. Rudbeckia hirta (common black-eyed Susan) and R. fulgida (orange coneflower) are the species most readily available to gardeners and include many of the newest cultivars. However, there are number of other species worth seeking out because of their unique attributes including R. maxima (large coneflower), R. laciniata (tall coneflower), R. triloba (brown-eyed Susan or three-lobed coneflower), R. subtomentosa (sweet coneflower), and R. nitida (shiny coneflower).

Although black-eyed Susans can often be purchased as bedding plants in the spring, they are very easy to grow from seed and you’ll have a much broader selection of cultivars to choose from. You can start the seeds indoors in early spring about 10 weeks before your climate’s last frost date or sow them directly in the garden in spring or summer. Perennial varieties can be sown from seed or transplanted in fall or early spring. For the best seed germination, plant when the soil temperature has warmed to about 70° F.

Rudbeckia will thrive in just about any sunny location that has well-drained soil. They will tolerate drought better than they will soggy ground. If you live in a hot, humid climate, choose a spot in the garden where your plants will receive ample air circulation to avoid the development of powdery mildew.

Sowing directly in the garden:

Scatter seeds then gently press them into the soil or cover with a very light layer of soil. Water regularly to keep the seedbed moist. As seedlings grow, thin to 6 to 12 inches apart for dwarf varieties and annuals and 18 to 30 inches apart for perennials, depending on the mature size of the plant. Water thoroughly to keep the soil moist until your plants become established. Once they are well-rooted, they will be able to tolerate dry conditions.

Sow seed indoors following the seed packet’s directions for planting depth, growing medium, and watering requirements. As soon as the seedlings emerge, provide plenty of light by placing them on a sunny windowsill or beneath fluorescent plant lights (see Starting Seeds Under Fluorescent Lights). Before planting your seedlings outdoors, be sure to accustom them to outdoor conditions by keeping them in a cold frame or another sheltered spot for a week.

Like most wildflowers, black-eyed Susans are remarkably carefree, drought-tolerant, and disease resistant. Even so, here are some steps you can take to prolong their bloom time and keep them healthy: 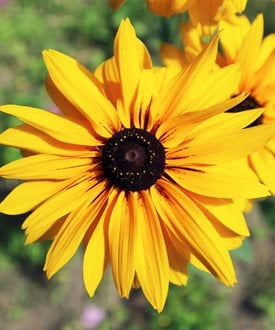 A very showy double-flowered form of black-eyed Susan with large golden-yellow flowers up to 3 ½ inches wide produced in profusion on long, sturdy stems. Grow as an annual or a short-lived perennial. In mild climates, seed may be sown directly in the garden and will begin to germinate in 2 to 3 weeks.

Also try: ‘Maya’, another double-flowered Susan with fluffy blooms that look like golden pom-poms with a hint of green in the center. More compact than ‘Double Gold’, staying under 2 feet tall. 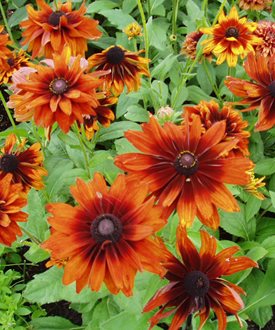 This popular All-America Selection features flowers in a warm autumnal color palette of yellow, orange, bronze, and mahogany. Double and semi-double blooms range from 3 to 4 ½ inches across and vary in color intensity like the changing hues of the setting sun. This half-hardy annual requires winter protection from frost but will enthusiastically reseed in the garden and return the following year.

Also try: 'Autumn Colors', a rich blend of gold, red, rust, and bronze on impressively large flowers up to 5 inches across. 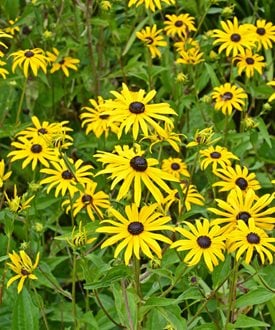 ‘Goldsturm’ lives up to its German name, which means “gold storm”, producing a tempest of 3- to 4-inch blooms from late July through September. This hardy Rudbeckia is also a long-lived perennial once established. Chosen as the 1999 Perennial Plant of the Year by the Perennial Plant Association.

Also try: ‘Little Goldstar', which has all the attributes of ‘Goldsturm’ in a compact knee-high size ideal for containers and space-challenged urban gardens. 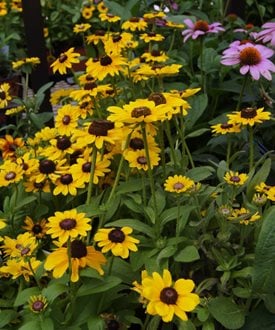 The dwarf ‘Toto Lemon’ (part of the Toto® series) bears an abundance of large 2- to 3-inch lemon-yellow blooms with chocolate-brown centers. Because of its tidy, compact habit, the flowers appear to cover the entire plant like a ready-made bouquet. Ideal for containers and mixed borders. Not perennial but will often reseed.

Also try: Other Rudbeckia in the Toto series, including ‘Toto Gold’, which has deep golden-yellow petals, and ‘Toto Rustic’, with petals that are mahogany red at the base and golden yellow at the tips. 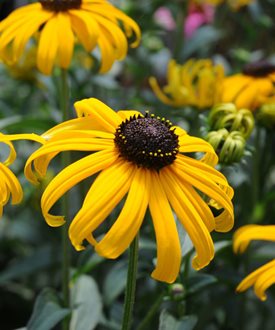 The name says it all. The perky golden flowers of this enthusiastic bloomer begin to awaken before those of the other Susans, putting on a display from mid-June through October. A unique day-neutral plant, it flowers regardless of the period of daylight it’s exposed to, thus the extended bloom time. It also stays nice and compact, making it a good choice for bringing continuous color to smaller gardens or the front of the border. 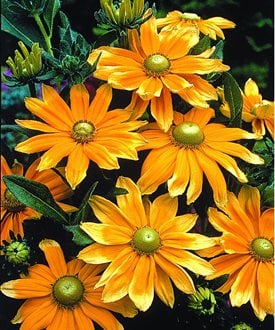 It almost seems sacrilegious to create a black-eyed Susan without its namesake eye color, but one look at this stunning cultivar will make you a convert. A 2003 AAS winner, it features spectacular 5-inch blooms with light green centers surrounded by petals that fade from peachy orange to delicate primrose yellow at the tips. 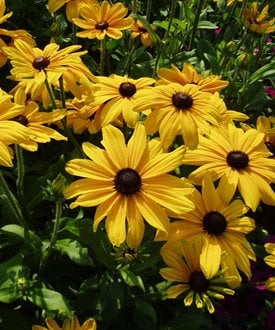 Another AAS winner, admired for its huge sunflower-like blooms up to 9 inches across, much larger than other cultivars. The golden-yellow flowers with dark chocolate centers are real standouts in bouquets, earning this Rudbeckia the 2000 Fresh Cut Flower of the Year award from the Association of Specialty Cut Flower Growers. 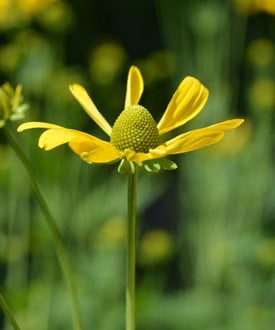 This is perhaps the tallest of the Susans, growing so high that you can admire its enormous flowers at eye level. The petals droop delicately, drawing attention to the prominent gumdrop-shaped green center cones. Because of its height, this Susie can topple unless given some support. For a shorter-statured plant, cut back by half in June before flowering occurs.

Also try: For another statuesque Rudbeckia, look for the aptly named large coneflower (R. maxima). These Susies can also grow to 7 feet, but their most remarkable features are the tall dark-brown center cones up to 6 inches high. 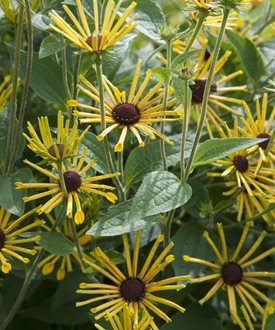 Another good back-of-the-border Rudbeckia, this variety grows to about 5 feet and is distinguished by slender lemon-yellow petals that curl tightly like miniature scrolls of paper rather than lying flat. As a bonus, the foliage has a sweet vanilla-like scent, making it a great addition to bouquets. 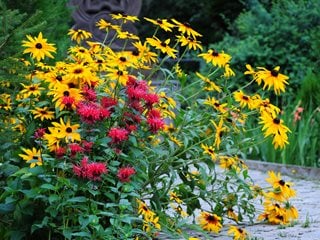 Although the bright, sunny flowers and dark center cones of black-eyed Susans create a striking color contrast on their own, these versatile plants pair beautifully in the garden with other summer- and fall-blooming perennials and annuals. Try some of these high-impact looks: