10 Best Yarrows for Heating up the Summer Garden

Tough and adaptable, these carefree bloomers will fill your garden with color all season long By Anne Balogh 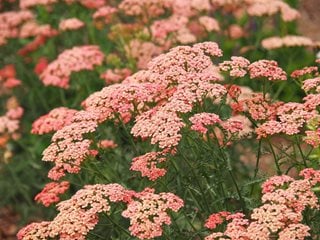 If a garden perennial could have a theme song, yarrow’s would be “I Will Survive.” It grows strong and has learned how to get along in even the toughest situations including drought, infertile soils, and sweltering heat. No one would guess that such a delicate-looking flower could be so resilient.

“Achillea (yarrow) is one of the perennials that can rescue a barren, dry area and cover it with bloom,” say Jeff and Marilyn Cox, authors of The Perennial Garden: Color Harmonies through the Seasons.

The same common white yarrow (A. millefolium) found flourishing in meadows and prairies has made its way into the perennial garden in recent years with the introduction of new cultivars and hybrids that offer a broader array of colors and forms while retaining yarrow’s gutsy nature. With selections ranging from low-growing ground covers to loftier plants for the middle or back of the border, there is a garden yarrow for almost any purpose.

On this page: Yarrow Basics | Grow Your Own | In The Garden | Yarrow Pictures | Plant and Seed Sources

Typically zones 3-9, but can vary depending on the cultivar.

Early summer to early fall, depending on the climate. In warmer growing zones, flowering begins earlier; in cooler zones it often continues into fall.

Varies by species, ranging anywhere from 8 inches to 5 feet.

Yarrow produces an abundance of broad, flat-topped flower clusters (or corymbs) made up of dozens of tiny daisy-like florets. Colors range from white and soft pastels to brilliant shades of yellow, red, orange and gold. Some cultivars, such as ‘Red Velvet’, have flowers with contrasting center stamens. The feathery foliage is also attractive, with finely divided gray or green leaves that remain evergreen in warmer climates.

Although yarrow will grow well in just about any type of soil, taller types tend to flop in soils that are rich or overly moist. They are at their best growing in well-drained, slightly acidic soil. “If you have trouble growing yarrow, it’s most likely because your soil is too wet. Plant it on high, dry spots,” recommend Jeff and Marilyn Cox.

Sow seeds or plant nursery-grown plants in fall or early spring after the danger of frost has passed. Most yarrows grown from seed will be inconsistent in height and flower color. If you want a specific color, height or form, buy potted plants.

Yarrow is one perennial that actually thrives on neglect, and your plants will suffer if you overwater or overfertilize them. Keep the soil evenly moist until the roots become established, but after that only water your plants when the soil is completely dry. Fertilization is rarely needed.

Divide yarrow every 2 to 3 years in spring or fall to avoid overcrowding and to reinvigorate plants that begin to look matted and untidy.

Deadheading yarrow will encourage repeat blooming and often prolong flowering into fall. If your plants become too tall and lanky, shearing back the foliage will make them bushier and often eliminate the need for staking. To reduce disease problems, thin out plants that become overcrowded and cut out any dead growth.

Use low-growing forms of yarrow as a soft-looking evergreen edging or even as an alternative to turf grass in dry climates. Because yarrow spreads by rhizomes, it will quickly form dense mats of water-thrifty foliage. Read more about alternative lawn plants.

Varieties with silver foliage and pale flowers, such as ‘Moonshine’, are great additions to evening gardens, alongside other plants with shimmery light-reflective foliage.

Use yarrows with rich yellow or gold tones, such as ‘Coronation Gold’, as a warm contrast to blue, purple or violet perennials, such as speedwell (Veronica spicata), Geranium ‘Johnson’s Blue’ and salvias (see Garden Color Schemes).

Plant yarrow in pollinator gardens along with other perennials that attract bees and butterflies, such as butterfly weed and bee balm.

Because of their drought tolerance, yarrows are an ideal choice for low-water or xeriscape gardens.

To enjoy yarrow in dried flower arrangements, tie fresh-cut bunches into bundles and hang them upside down by the stems in a cool, dry place. The dried flower heads will retain their color for months. 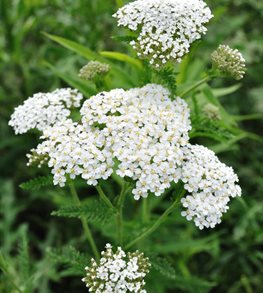 This tough-as-nails native species, and the parent of many cultivated yarrows, is at its happiest growing in inhospitable conditions and is often found blanketing abandoned fields, dusty roadsides, and erosion-prone slopes. In the perennial garden, give it a home with other low-maintenance meadow or prairie plants such as milkweed, black eyed-Susan, purple coneflower and native grasses. The Latin name millefolium, or “thousand leaves”, describes the plant’s deeply divided foliage. 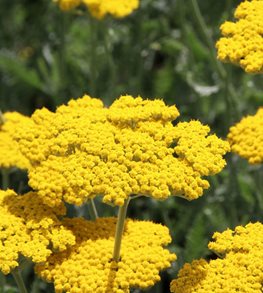 A cross of A. filipendulina (fern-leaf yarrow) and A. clypeolata, this popular garden hybrid is a real knockout, with dazzling golden-yellow flower heads up to 5 inches across. The attractive gray-green foliage is also an asset and often persists through the winter in warmer growing zones. 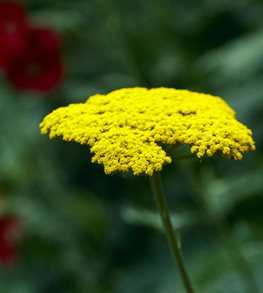 A long-blooming hybrid with silvery foliage and lemon-yellow flower clusters that cover the plant from early summer into fall. Unlike the majority of yarrows, it is an easily contained sterile variety that does not spread or self-sow.

‘Little Moonshine’, a more compact version less than a foot tall, making it suitable for containers or the front of the border. 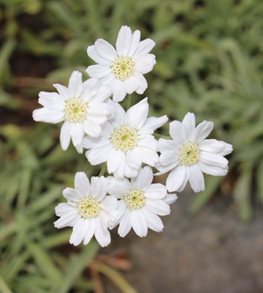 This diminutive species is one of the most rugged and xeric of the yarrows, say the horticulturists at High Country Gardens, which specializes in drought-tolerant perennials. The slow-growing plants gradually form low, dense mats of narrow evergreen leaves covered with attractive daisy-like flowers. A good choice for rock gardens and for erosion control on dry south- or west-facing slopes.

Greek Yarrow (A. ageratifolia) and Keller’s Yarrow (A. x kellereri), other low-growing varieties with white flowers and silvery foliage. 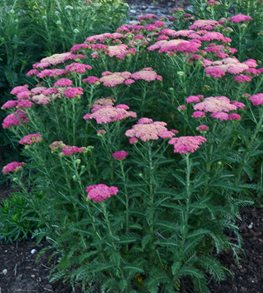 Bred by Walters Gardens, this new color-morphing variety buds out in June with hot pink flowers that gradually lighten to pale pink in the center as they mature, creating a lovely contrast throughout the summer. The lacy green foliage serves as an airy backdrop for the dense clouds of pink. 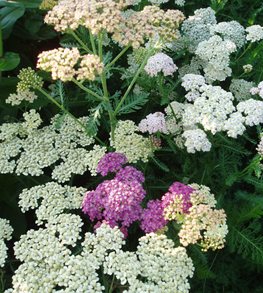 This All-America Selection winner brings a lovely array of pastel shades to the perennial garden, including mauve, pink, purple, rose, and salmon. It also is an exception to the “don’t grow yarrow from seed” rule. Not only will growing from seed give you the widest possible color range, your plants will bear flowers the first year and bloom continuously until heavy frost. 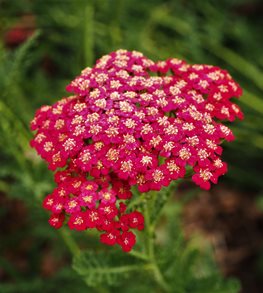 Dark rosy red blooms with yellow centers make this cultivar one of the most dramatic red-flowering yarrows. As a bonus, it is also the most fade resistant, with long-blooming flower clusters that retain their rich, velvety color from early through late summer. 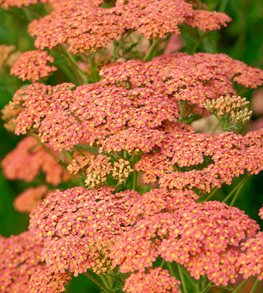 The orangey-rose color of a luscious sun-ripened peach, this space-saving cultivar is shorter in stature than most yarrows and has a mounded container-friendly growth habit. A member of the Seduction Series™ of yarrows developed in The Netherlands. 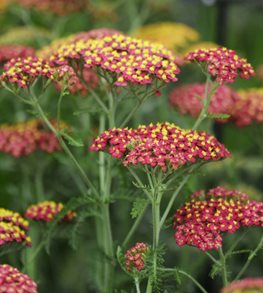 This spicy fusion of paprika-red flowers and bright yellow centers is a spirited grower that will spread quickly to form a dense weed-blocking mat. The intensely colored blooms fade to paler shades of light pink and salmon later in the season. 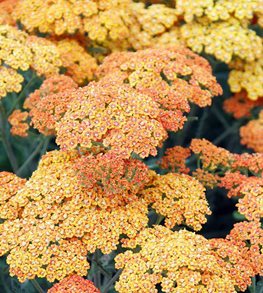 Despite its compact size, this showstopping yarrow from the Desert Eve™ Series sports impressively large burnt-orange and yellow flower clusters up to 4 inches across. It’s also bred to bloom earlier and longer than most yarrows, giving you nonstop color from late spring through fall. A good choice for containers and dried flower arrangements.

Other colors of Desert Eve, including Deep Rose, Light Yellow, Red, and Cream.