The Ginkgo Tree: A Story of Survival

Botanist Peter Crane, the ginkgo groupie, is a fan of the ancient tree’s history, beauty, and quirks By Bill Marken

Many of us can’t wait for the autumn show of the Ginkgo biloba (maidenhair tree), which tends to peak just before the buttery-yellow leaves fall all at once, as if they’d planned a dead-of-night drop and one of them said, “ready, set, go.” Considered a living fossil and one of the world’s most historic and distinctive trees, the ginkgo is also one of the most reliable and common street trees, from New York to London to Tokyo (it’s one of the most widely planted trees in Japan). Some people also appreciate the ginkgo’s culinary and medicinal uses or its inspiration to art and spirituality.

Then there’s Professor Sir Peter Crane, a botanist and evolutionary biologist at Yale University, who has taken ginkgo appreciation and study—and fandom—to new depths and lengths, literally around the globe. What he describes as his “multiyear obsession with this very special tree” has led to a book called Ginkgo: The Tree That Time Forgot (Yale University Press, 2013). It’s a serious scientific monograph, but hardly dry. It also reads like an unabashed fan letter to the ginkgo and a meditation on the relationship between plants and people. A sampling of chapter titles shows his range: Time, Energy, Sex, Origins, Persistence, Extinction, Reprieve, Gardens, Nuts, Streets, Pharmacy, Legacy.

Crane says the ginkgo gave him “the perfect opportunity to talk about the work I’ve been doing-evolutionary history, cultural history interactions, and how and where plants stand with people.” He grew up in England, earned a Ph.D. in Botany, and began to learn how interesting and how important the ginkgo is. He recalls a field trip to Yorkshire’s fossil fields with the late Thomas Maxwell Harris, a noted British paleobotanist. Crane’s understated reaction to the 150-million-year-old fossilized leaves of an ancestor of today’s Ginkgo biloba: “Wow, this is an old tree.”

In 1981 Crane came to the U.S. for research and later held positions at the Field Museum of Natural History in Chicago. On a fossil-hunting trip to a treeless area of North Dakota in 1982, a local collector showed him “an exquisitely preserved ginkgo leaf.” The fossil was 57 million years old, and it looked just like a leaf of a modern-day ginkgo.

Crane delved further into ginkgos when he returned to England to serve as director and chief executive of the Royal Botanic Gardens, Kew, from 1999 to 2006. As he says in his book, “During those seven years, the oldest and perhaps the most important ginkgo in the United Kingdom flourished just steps from our family’s home in the garden. We passed it almost every day.” The tree was planted around 1761—European traders had brought ginkgo seeds, seedlings, or cuttings to Europe only a decade or two earlier.

The ginkgo’s amazing survival story goes back more than 200 million years. Crane writes, “Ginkgo is a tree that has persisted, little changed, for these unimaginable eons, and its history is an extraordinary tale of survival against great odds.” Ginkgo’s prehistoric ancestors ranged widely throughout the world, but clearly began to decline about 100 million years ago, becoming confined to limited areas of eastern Asia. Still, it endured despite the cataclysmic events that eliminated the dinosaurs and much other plant life.

Around a thousand years ago, the ginkgo was brought from the wild into temple gardens of China, and was later introduced to Japan and Korea. Crane writes that its medicinal and culinary usefulness allowed it to thrive alongside people. It has even proved resilient to modern city life—including 60,000 ginkgo street trees in New York City—which Crane credits to the tree’s roots’ relative tolerance of compacted soil, its ability to survive with poor air quality, and little oxygen getting to the roots.

Crane explains how one of the ginkgo’s many quirky ways have given it another edge in survival. The tree is relatively unusual among seed-bearing plants in having male and female reproductive parts on separate trees. The female ginkgo produces the famously stinky seeds containing the prized and edible nuts. The trees used for landscaping are usually named varieties of male trees (thus odor-free), selected for their form (from compact ‘Lakeview’ to columnar ‘Princeton Sentry’ to weeping ‘Pendula’) or brilliance of fall color (‘Autumn Gold’). There’s also ‘Variegata’, with cream-and-green variegated leaves.

For his services in research and conservation programs, as well as his leadership at the Royal Botanical Gardens, Kew, Crane was knighted in the U.K. in 2004. Now his main interest is studying living plants with a paleontological history—such as the dawn redwood and the magnolia and its relatives—and what can be learned from them. He worries about the danger to biodiversity because of intense deforestation around the world, with more species becoming extinct now than at any other time in history. Though the ginkgo is a success story—of near extinction and survival—it serves also as a cautionary tale of potential loss. Crane writes that the ginkgo asks us to “think more carefully about all we lose when the short view rules our world and everything in it.” 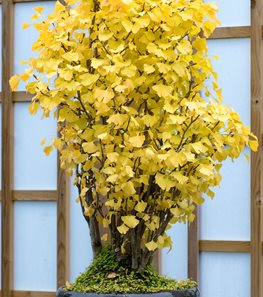 An approximately 80-year-old G. biloba bonsai at Royal Horticultural Society’s Wisley Garden at the peak of its autumn color. 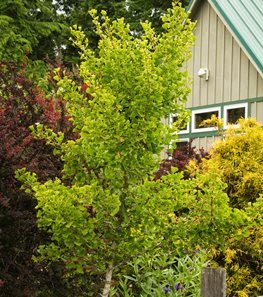 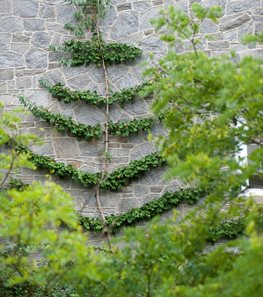 G. biloba ‘Saratoga’ at the Scott Arboretum espaliered on a stone wall. 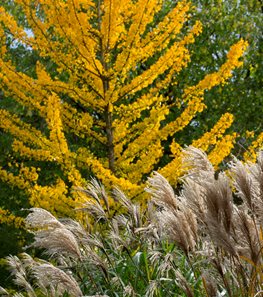 G. biloba and Miscanthus sinensis ‘Malepartus’ are a dazzling duo in the fall. 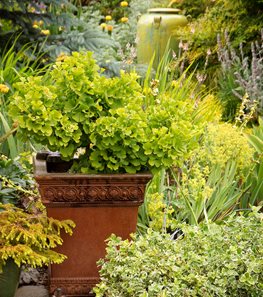 G. biloba ‘Troll’ is particularly suited to containers, growing up to 3 feet tall. 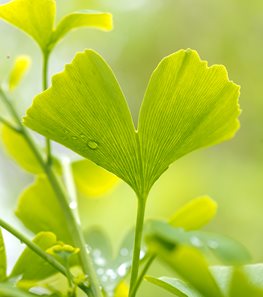 Gleaned from Peter Crane's book and interviews with him, here are just some of the reasons why Ginkgo biloba is one of the most historic, distinctive, interesting—and weirdest—trees.