The ABCs of Growing Arborvitaes

From the diminutive ‘Tiny Tim’ to the towering ‘Green Giant’, arborvitaes come in a diverse array of shapes and sizes. Here are some varieties to try, along with basic care and planting tips. By Anne Balogh

If you’re looking for a fast-growing, easy-care evergreen to use as a privacy screen or hedge, an arborvitae is hard to beat. Plant several of them in a row, and in just a year or two the lush, dense foliage will fill in to create the ideal living fence. But don’t overlook the many other ways you can use arborvitaes in both formal and informal garden designs. These versatile conifers are suitable for almost any purpose.

On this page: Arborvitae Basics | Planting | Care | Pruning | In the Garden | Cultivar Pictures 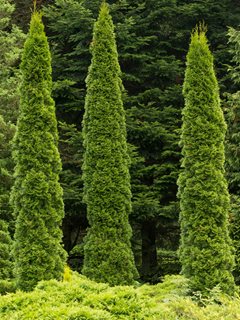 Arborvitae (Thuja) is a genus of five species, but these two North American natives are the most common:

Varieties ranging from Zones 2 to 8

The mature size of an arborvitae depends on the species and cultivar. Some low-growing shrubs are under 3 feet tall. Large trees can exceed heights of 70 feet and widths of 25 feet.

Mounded, conical, pyramidal, rounded, or pendulous, depending on the cultivar.

Most arborvitaes have flattened, lacy sprays of aromatic needles, with colors ranging from emerald green to gold. Clusters of rosebud-shaped cones measuring about ½ inch long appear in early summer, turning from green to nutmeg-brown at maturity. Female cones have 6-12 overlapping scales, male “cones” rather insignificant in most species.

The growth rate of arborvitae varies depending on the species and cultivar. Some are very fast growers adding 3 to 4 feet per year, while others, such as dwarfs and miniatures, grow much slower.

Check your local nursery or order them online from Proven Winners for spring delivery.

HOW TO PLANT ARBORVITAE 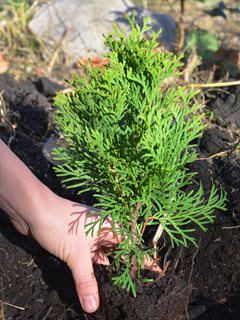 Don’t plant your arborvitae too deeply or it will languish and eventually die. Photo by: Radovan1 / Shutterstock.

You can plant an arborvitae at any time of year, but fall is typically the best season because the cooler temperatures prevent heat stress and the moisture from fall rains helps to establish a strong, healthy root system (see What to Plant in Your Fall Garden).

Smaller cultivars of arborvitae can be used as attractive container plants or topiaries that will provide season-long interest. Dwarf forms, in particular, are tolerant of some root restriction and can thrive outdoors in pots for years. 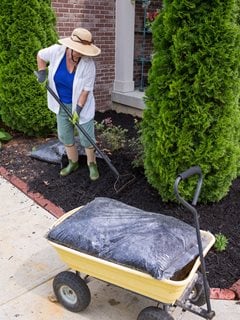 Mulching around the base of your arborvitaes will help retain moisture in the soil. Photo by: Ozgur Coskun / Shutterstock.

When planted in good soil and given enough water and sunlight, an arborvitae rarely needs a dose of fertilizer to stay healthy. However, if new growth becomes sparse or your soil is less than ideal, you may need to give your plant a nutritional boost. (See these recommendations for fertilizing evergreens from the University of Minnesota Extension.) If you are growing arborvitaes in containers, you will need to fertilize them regularly to replace nutrients that leach out of the soil. Use a slow-release granular fertilizer to avoid root burn, and be sure to water well before and after each application.

Arborvitaes can suffer stress from both underwatering and overwatering. If your plant isn’t getting enough water, the foliage will start to yellow or brown and the needles may drop. (In fall, some browning and needle drop is normal.) Overwatering may also cause needle discoloration and could lead to irreversible damage caused by root rot and fungal infection.

As a general rule of thumb, give newly planted shrubs about an inch of water a week during the growing season, keeping the soil evenly moist but not saturated. You can decrease the frequency of watering as the roots become established. Use a hose to deliver water directly to the root zone. To keep the soil moist, place a layer of compost or mulch around the base of the plant (avoid covering the trunk or crown of the plant) and replenish it annually. As the mulch decomposes, it will also improve the soil structure. Learn more about the right mulch to use and the best methods of application.

Potted arborvitaes should be watered regularly, even during the winter months. Because evergreens don't go completely dormant in winter, they will still need moisture.

Heavy snow and ice buildup can bend and break the branches of taller arborvitaes. Use a broom to gently brush off heavy, wet snow before it has a chance to accumulate. Some types of arborvitae, especially those that put out two or more leaders, may need to be staked to keep them in an upright position. Storm-damaged arborvitaes can often be rejuvenated by pulling the drooping branches upright with ties and pruning off broken limbs. See these winter care tips from the University of Illinois Extension.

One reason why arborvitaes are so popular is because they are rarely troubled by insect and disease problems. However, they may succumb to needle and twig blight caused by fungal attack, especially if air circulation is inhibited by crowding plants too closely together. To control blight, prune off all affected branches and treat with a fungicide. Also watch out for bagworms, which like to feed on the foliage of arborvitaes and other evergreens. The best control method is to handpick the spindle-shaped egg bags (which are actually made from the needles of their host plants) and destroy them before the larvae hatch and begin feasting on the branches. Spidermites and stem canker can also be problems.

The soft, tender needles of American arborvitae (T. occidentalis) are a delicacy for foraging deer. Unfortunately, the needles won’t grow back once the branches are stripped bare. If deer are a problem in your garden, you’re better off growing giant arborvitae like Spring Grove® (T. plicata), which deer find less appealing, or a different deer-resistant evergreen such as juniper. Learn more about the best deer-resistant plants for your garden. 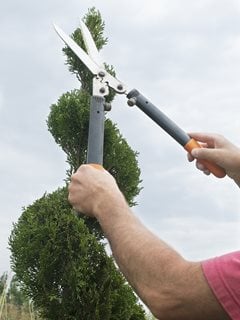 Arborvitaes will retain their natural shape as they mature and regular pruning is usually not necessary. Arborvitaes will tolerate more frequent and heavier pruning if you want to shape them into formal hedges and topiaries. Follow these dos and don’ts to get the best results:

Here are some additional tips from The Morton Arboretum on the best methods for pruning arborvitaes and other evergreens.

USING ARBORVITAE IN THE GARDEN

Here are some design ideas for incorporating arborvitaes into your garden: 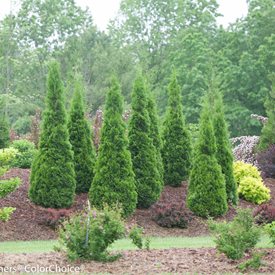 The narrow shape of this evergreen makes it a real space saver—plus it doesn’t require pruning. Featuring dark green winter foliage, this selection is also resistant to winter burn. 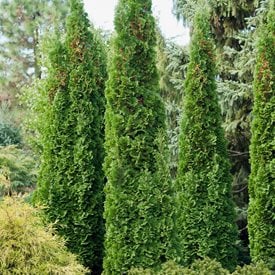 A slow-growing cultivar with a very slender, upright habit, reaching a height of about 20 feet but width of only 4 to 5 feet. The mossy-green foliage bronzes slightly in winter. Although densely branched, the narrow form may make it susceptible to breakage from ice and snow accumulation. Staking after planting will help to prevent damage. 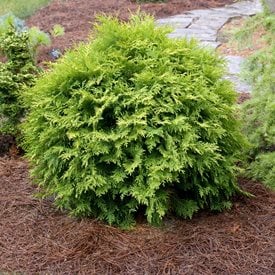 This bright little orb of gold is a great choice for providing winter interest and mixing with other shrubs to add contrast. It maintains a natural rounded shape, growing up to 3-4 feet tall and wide at maturity. 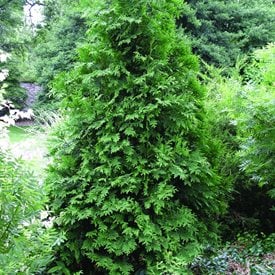 This stately pyramid-shaped arborvitae (a hybrid of T. plicata and T. standishii, a Japanese species) is one of the fastest growing, adding 3 feet or more to its stature each year before attaining a mature height of 50 to 60 feet. Sturdy and adaptable, it grows in sandy loam or clay soils and resists the weight of heavy ice and snow. The foliage remains a glossy dark green in all seasons. 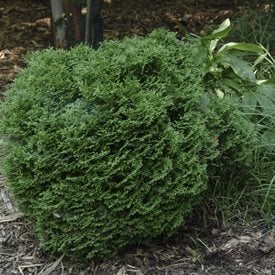 Shaped like a pin cushion, this charming dwarf variety has small sprays of lacy blue-green foliage that turn bronze over winter. Extremely slow-growing and hardy, it remains a midget-sized 3 to 4 feet. 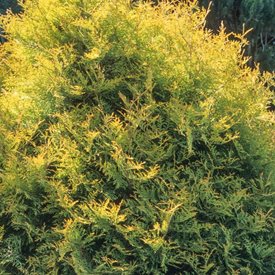 One of the best for year-round color, with bright yellow foliage in summer that turns a deep golden copper over winter. Another attractive feature is the compact domed shape, which tops out at a height of 3 to 5 feet. 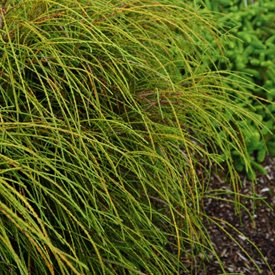 This sassy little thuja looks like a green rag mop, with twisted yarn-like foliage that shoots up from the center before cascading downward on arching branches. Grows 4 to 5 feet tall with an equal spread. 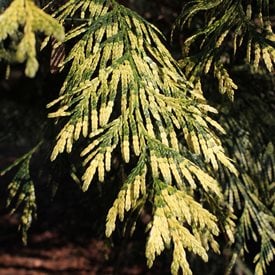 This stunning arborvitae is aptly named for its two-toned foliage with golden yellow accents. It has a narrow pyramidal shape, reaching a height of 30 feet or more and a width of 8 to 12 feet at the base. Like ‘Green Giant’, it has a fast growth rate, averaging about a foot per year. 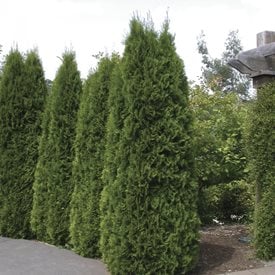 German for “emerald,” ‘Smaragd’ has glossy bright-green foliage that maintains its color in all seasons. Reaching an ultimate height of 10 to 15 feet and spread of 3 to 4 feet, it stays narrow and compact with minimal pruning. Hardy and cold tolerant (down to zone 2). 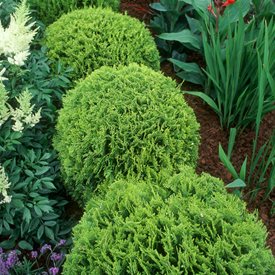 This is one of the smallest and slowest growing thujas, developing into a little green mound about a foot tall and wide after 10 years. Features delicate, finely-branched foliage that turns bronze in the winter.