We are naturally drawn to trees. Their canopies form outdoor rooms. A pair frames a view, an avenue makes a sheltered walk. Trees make a garden beautiful—as these great ideas prove. 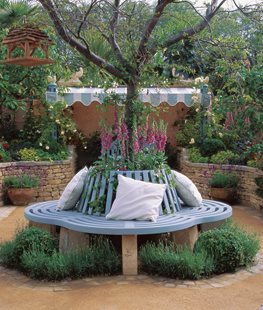 Making a livable space outdoors can be as simple as a couple of pillows and a bench under a tree. English designer Bunny Guinness created this idyllic cottage courtyard around a Higan cherry (Prunus x subhirtella ‘Autumnalis’). The choice of tree was shrewd—it is long-lived, and this variety flowers twice a year. 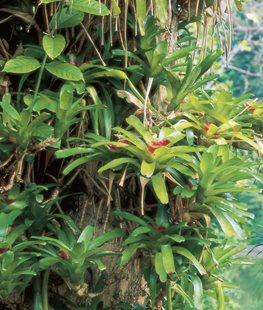 Photo by: Alan and Linda Detrick.

In hot climates trees are potential niches for a whole range of other plants—orchids, ferns, bromeliads and vines. The host tree here is Lagerstroemia speciosa, a tropical specimen that is a natural home for bromeliads, packed in moss and wired to the trunk. In colder areas you’ll achieve a similar luxuriance with a rose or clematis trained through an old tree.

Tip: Rosa banksiae ‘Lutea’ is a good rose to cover a tree—vigorous with masses of flowers. 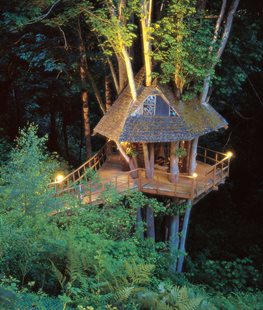 It takes a special type of tree to accommodate humans who want to sleep among its branches and a special type of builder to make the dream come true. This clump of five Oregon maples (Acer macrophyllum) in Washington state forms the heart of a hexagonal treehouse reached by a cantilevered bridge from the hillside. 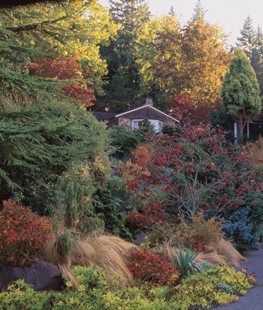 This fall scene at the Elisabeth C. Miller garden in Seattle shows how trees can anchor a house in the landscape. The key to fitting in, when planting the outer reaches of the garden, is to use natives or only those exotics that mimic the form and scale of the natives—in this region, Western red cedars and Douglas firs. The scene still looks essentially Northwestern, even though many of the trees are nonnatives. “Alien” shapes and forms fit in closer to the house. The prominent tree in the foreground is Acer japonicum ‘Aconitifolium’, and Fothergilla gardenii is massed at the foot of the slope. 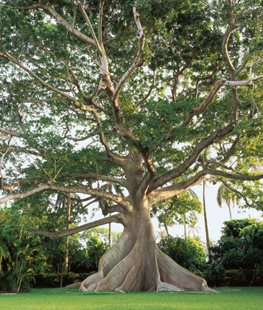 The amazing buttress roots of the kapok tree (Ceiba sp.), a member of the baobab family, inspire awe in mere mortals—oaks and cedars command the same respect in cooler regions. Such giants are suited only to large estates, but the ancient custom of planting a tree for posterity or to mark the birth of a child can be carried on in the average garden. 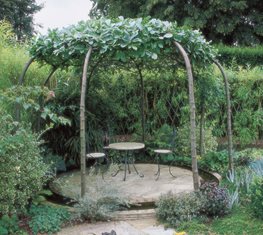 A ring of whitebeam mountain ash (Sorbus aria), trained into a leafy roof, shows how young trees can be manipulated. By English designer Julie Toll, this feature is halfway between an arbor and a grove—the slender trunks encircle the space like the columns of a building. To achieve this type of effect, start with single vertical trees, about three to four years old. 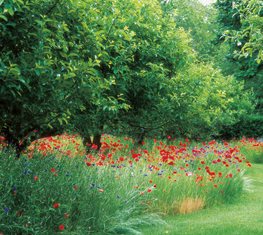 Orchards are an ancient way of farming trees that also pleases the eye—the regular rows follow the contours of the land, yet the formality is never harsh and seasonal changes, spring blossom, summer leaf and autumn harvest, are superconcentrated. Designers have adopted the orchard, partly for its status as an endangered landscape feature and partly for the minimalist appeal of a formal grid with wild underplanting—red poppies in this case. 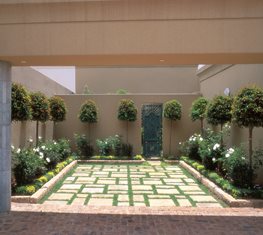 Slim manicured trees pack a lot of form and color into a small space. The invisible plane of their level canopies and their regular yet organic forms break up high walls and small urban spaces. The style can be endlessly varied with different underplanting ideas and foot-of-tree treatments, planted or paved, that create a pattern at floor level. Designed by Raymond Hudson, Johannesburg, South Africa. 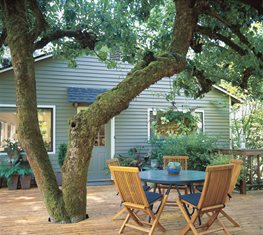 This deck, in a garden in Woodinville, Washington, makes a usable space close to the house and has the benefit of preserving an inconvenient yet wonderful 65-year-old moss-covered apple tree. Arthritic it may be, but hung with lights and a mossy wire foliage basket from Ravenna Gardens, it makes a romantic spot in the evening. When paving an area under existing trees, remember to allow for radial growth of the trunk and try to keep root disturbance to a minimum. 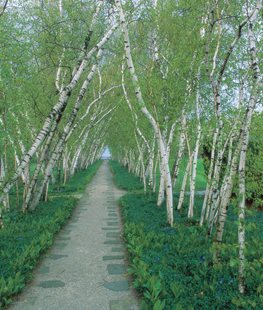 The birch walk at Stan Hywet Hall in Akron, Ohio, designed by Warren H. Manning from 1911. The trees (Betula papyrifera), underplanted with blue periwinkle (Vinca minor) and lily-of-the-valley (Convallaria majalis), lean toward each other as if by natural disposition, yet it took some art to create that gentle gothic arch. Such naturalness is a hallmark of the Craftsman style of the times.

“Trees, except in the tiniest of gardens, are the prime ingredient of a beautiful view.”
—Graham Stuart Thomas

Thanks to Richard Schulhof of the Arnold Arboretum, Boston, for his advice. For ideas on using trees and which types would work in your garden, visit your nearest arboretum.

Thanks to Consulting Editor Ruth Chivers.