Take a close-up look at the intricate bark of eight trees, and read four tips on how to design with bark By Jenny Andrews 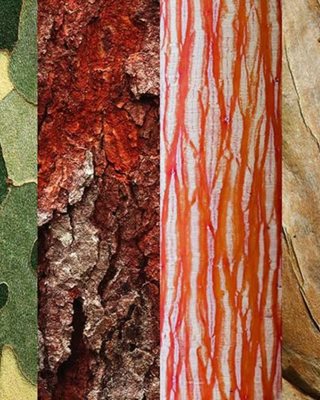 Much more than the schematics of its layers in a freshman biology book, bark is the armor, the life support, and the face of a tree, indelibly etched with its years of bounty and hardship. Each species has its own unique bark pattern, often distinctive enough to serve as a means of identification. It can be red, green, gray, white, orange, or striped; thorny, smooth, rough, or deeply furrowed; or it can peel away to create a multicolored tapestry. Seen close up and in isolation from the rest of the plant, bark invites comparison to abstract art. As a design element in the garden, bark is the last frontier, interesting in the winter certainly, but also a bonus of texture and pattern all year that enhances foliage and flowers.

Appeal: Bark can add color and texture to a landscape throughout the growing season and will continue to create visual interest even into the depths of winter.

Exposure: When planting a new tree or shrub for a bark display, avoid a hot western exposure. Tender bark can be damaged in late winter when it is subjected to fluctuations of hot and cold, freezing and thawing. Several of the plants shown here are understory trees that need light shade. Others, like the eastern red cedar and dogwood, can take part shade to full sun.

Soil: Bald cypress and sycamore are often found near water in their native habitats, though they do not require a wet site to thrive. The other plants here are satisfied with adequate moisture and good drainage. Current thinking is not to amend soil at planting time, using native soil to backfill the hole. Dig the hole only as deep as the root ball and two to three times as wide.

Care: To keep a tree and its bark healthy, mind the weed-eaters and mowers. Gashes and cuts are unsightly and can serve as an entry point for pests. And completely girdling a tree is certain death. One solution is to create a bed around the tree or put down a mulch ring 3 to 4 inches deep. But don't pile the mulch up on the base of the tree. This holds too much moisture near the trunk and can encourage diseases, bark-chewing insects and rodents to make themselves at home. There is usually no need to fertilize trees, except at planting time to give them a head start. Water new trees once or twice a week for the first couple of summers unless there is plenty of rainfall. 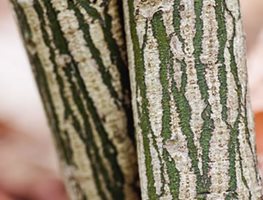 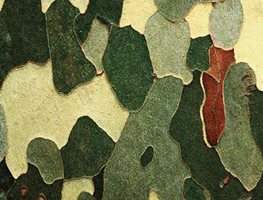 A striking tree often seen along streams. Bark is grayish brown and scaly at the base; further up the trunk it breaks off in irregular plates, revealing a creamy white, mottled layer beneath. A macro view brings to mind aerial images of cropland. Zones 4-9. 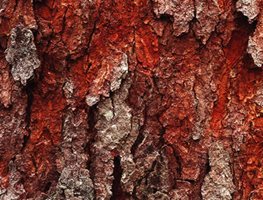 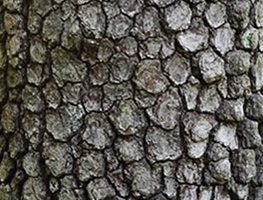 A small tree popular for its large, white spring flowers and purplish red fall color, the dogwood also has unusual bark with small blocky plates. In winter the tree’s texture and graceful silhouette are most visible. Zones 5-9. 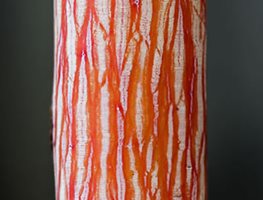 One of the very best small trees (to 15 feet) for bark color in the winter. The pinkish summer tones turn to brilliant orange-red striped with white as the season wanes. Bright yellow autumn leaves tend to fall early, revealing the treasure beneath. Needs light shade and good drainage. Zones 5-8. 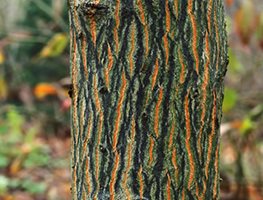 A beautiful, small native tree, best suited for shady locations with acidic soil. White, pendulous flowers emerge in April and May. From youth to maturity, bark changes from light gray with dark fissures to dark gray or brown with scaly plates. Zones 4-8. 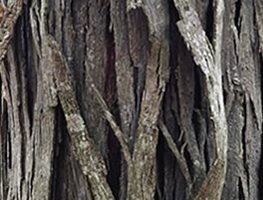 One of the most distinctive barks for large shade trees. Strips pull away from the trunk at top and bottom, staying attached in the middle to create a shaggy appearance. Tree usually reaches 60 to 80 feet but can grow much taller. Native to the eastern half of the United States. Zones 4-8. 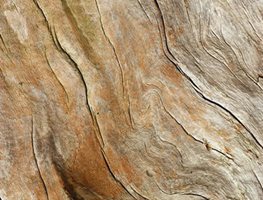 Conifer native to the eastern and central United States that thrives in limestone soils. Mature trees can be 50 feet tall and have great presence, but with a delicacy in their swags of evergreen foliage, small blue summertime fruits, and silvery gray and brown bark. Zones 2-9.

* A tree can be ruined forever by improperly removing a limb or branch along the trunk. Hire a professional to ensure proper pruning cuts and that the work is done at the right time of year for that species.