How to plant and care for saucer magnolia, southern magnolia and more By Anne Balogh

With their showy flowers, intoxicating scent, and glossy green leaves, magnolias are one some of the most popular flowering trees. 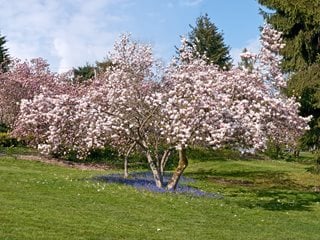 The iconic southern magnolia (Magnolia grandiflora) is the most well-known. But magnolias, particularly the deciduous varieties, can be grown in almost any region of the U.S. From the tip of Florida to as far north as Maine and Washington, there's a magnolia that will grow in your garden.

Magnolias come in a wide array of cultivars that can suit the scale of any garden. Sizes range from 15-foot shrubs to massive trees that can reach heights of 80 feet or more.

On deciduous varieties, the flowers open in early spring before the leaves appear. They emerge from large pussy-willow-like buds that set during the previous growing season and remain throughout fall and winter. Evergreen types bloom heaviest during the transition from spring to summer. But, don’t be surprised if your magnolia tree reblooms in the summer or early fall. It’s not uncommon for sporadic blooms to appear on new growth.

Eight species of magnolias—two evergreen and six deciduous—are native to the United States. These native species have proven quite adaptable and many can flourish in gardens outside their natural growing zone.

Here are some of the most well-known types of magnolia trees:

When planting magnolias, pick the site carefully. They have wide-spread, shallow root systems that can be easily damaged during transplanting. Larger magnolias have branch spreads of 30 to 40 feet, making them useful as shade trees in larger yards. Compact, shrubby varieties are attractive in borders or as an ornamental tree in Asian gardens.

Magnolia trees require little care and are resistant to many diseases and pests. They offer long life spans of 100 years or more given the right growing conditions.

Most varieties tolerate hot summers and moderate drought, making them a resilient choice for gardens in harsher climates. However, younger trees should be watered regularly until fully established.

Magnolias typically need little pruning other than to remove crossed or damaged branches or for aesthetic reasons. The best time for pruning is soon after the tree has finished blooming, in either late spring or early summer. Pruning too late in the season will result in fewer blossoms the following spring.

If your magnolia is growing and flowering well, there is no need to fertilize. However, if your tree isn’t thriving or has yellow leaves, you should have your soil tested. Check with your local university’s extension to see if they provide soil testing and recommendations for adding supplemental nutrients. If you do decide to fertilize, wait until the spring after planting your magnolia, then apply a slow release fertilizer just as your tree starts to leaf out.

While the magnolia is best known for its flowers, its foliage and fruit are also very attractive. 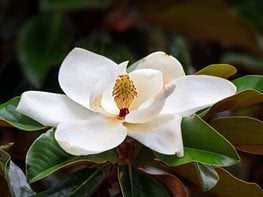 Magnolia trees are prized for their large flowers that perfume the balmy spring air with a sweet, heady fragrance. Their magnificent tulip- or star-shaped flowers can be as large as saucers when fully opened. They range in color from pink, purple, white and even yellow. Some varieties have double blossoms. 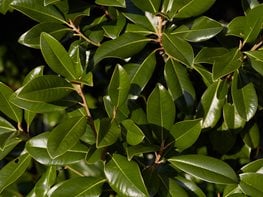 Evergreen species, such as the southern magnolia, have large, glossy, oval-shaped leaves that remain attractive year-round. 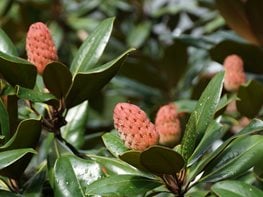 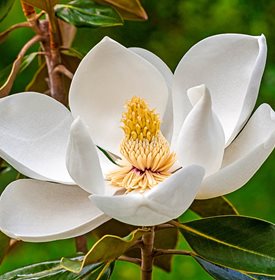 Magnolia virginiana Green Mile™ has an upright form good for allée plantings, but also attractive as a single specimen. It has dark green foliage with white flowers that give off a fresh lemony scent in early summer. 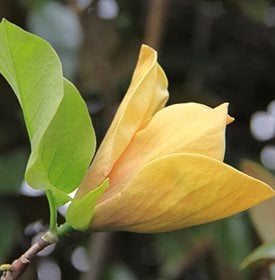 Magnolia ‘Judy Zuk’ has tulip-shaped yellow flowers with plum tinged bases that appear in early spring. This tree’s leaves turn yellow in the fall before dropping for the winter. 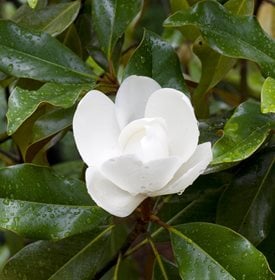 Magnolia grandiflora 'Bracken's Brown Beauty', matures at 40 feet and is one of the most cold-hardy selections, growing as far north as New England. 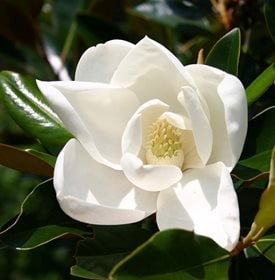 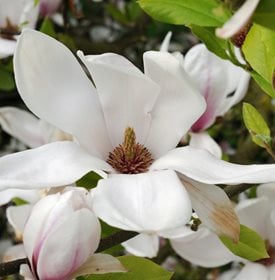 Magnolia ×soulangeana, commonly known as saucer magnolias are the first to bloom in spring and have huge 5- to 10-inch flowers. They are compact, deciduous, low-branched trees that will grow to a height of 20 to 30 feet and are cold-hardy to Zone 5. 'Brozzonii', a popular saucer magnolia cultivar, has large white flowers with lavender-pink bases. 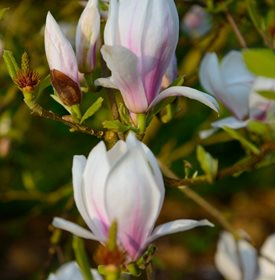 ‘Lilliputian’ is another popular saucer magnolia which grows to a height of only 15 feet and displays smaller pink flowers. 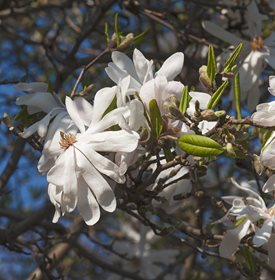 Star magnolias (Magnolia stellata) are early blooming, compact, deciduous shrubs that grow 15 to 20 feet tall and 10 to 15 feet wide. 'Centennial' is a cultivar which features 5-inch flowers with a soft pink blush. 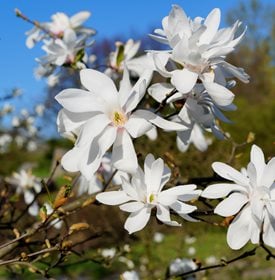 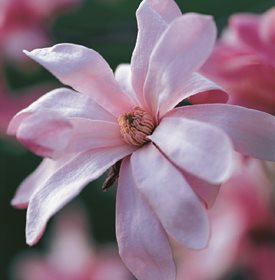 Loebner magnolias (Magnolia ×loebneri), another deciduous variety, produce an abundance of star-shaped flowers from March through April. Shown here is ‘Leonard Messel’, with its dark and light pink, fragrant, 4-inch flowers on a tree that grows to 20 feet. 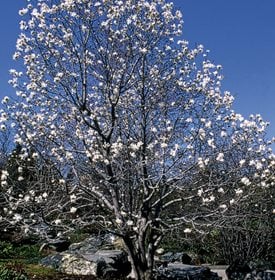 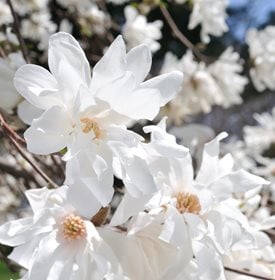 ‘Ballerina’ is another Loebner variety which grows to 20 feet tall, with white flowers.

BEST PLACES TO SEE THEM

To locate public gardens and arboretums that have noteworthy magnolia collections, check this map from The Magnolia Society International.

Enjoy garden travel? Check out our local self-guided day trips and other travel destinations. Sign up for our Garden Travel Newsletter to be alerted when new travel opportunities are available!