According to Dale Haney, the White House's horticulturalist, the oldest trees on the property are two southern magnolias (Magnolia grandiflora) planted by Andrew Jackson between 1829 and 1837. He planted them in honor of his wife, Rachel, who died two weeks after he won the election, and before his inauguration. Alone, he left their home in Nashville, Tennessee for the White House, and he brought two magnolia saplings from the garden. Magnolias had been Rachel's favorite tree; Jackson planted them in her memory, and he never remarried. The trees still bloom at the South Portico, and you can see it engraved on the back of a twenty dollar bill. (A map of commorative trees at the White House is here. It lists the specimen with the year and planting president.) 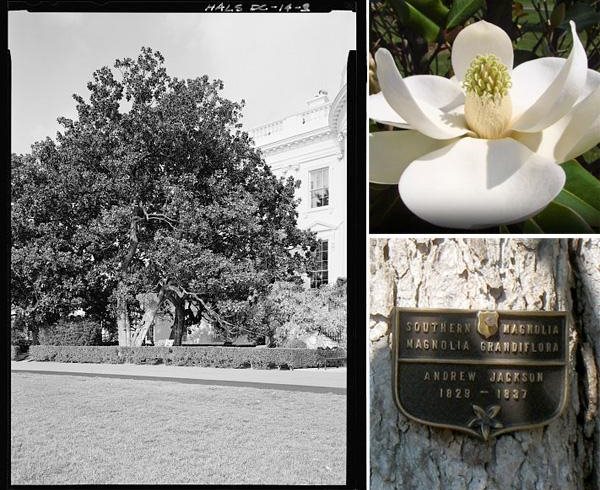 A honey locust tree (Gleditsia triacanthos) in the Soldiers' National Cemetery is known as the "witness tree"-the last living witness of Abraham Lincoln's Gettysburg Address on November 19, 1863. In the years following the Civil War, more than 100 trees were planted in the Cemetery, many to commemorate fallen soldiers (Kentucky, for example, planted several Kentucky coffee trees in honor of soldiers from the state), but the honey locust is the only tree-and, indeed, the only living thing-to have heard Lincoln deliver that great American speech, the one that began "Fourscore and seven years ago." History buffs with some yard space may be interested to know that a historic preservation organization has harvested the tree's seeds, and is now selling sapling descendents of Lincoln's honey locust. 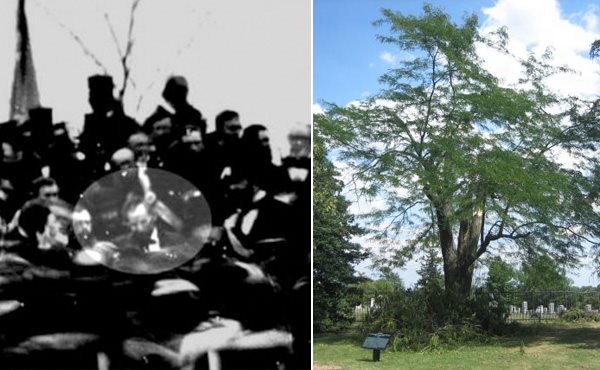 Abraham Lincoln about to deliver the Gettysburg Address with a young honeylocust tree in the background, and the tree today. Photo credits: The National Archives (left), William D Hewitt (right).

George Washington never chopped down a cherry tree, but he did plant a lot of others-all American native species, naturally-at his Mount Vernon home. Washington loved horticulture and he assumed the role of landscape designer at the estate. He designed a sweeping bowling green flanked with long rows of trees. The canopied grounds were perfect for entertaining, especially when fellow horticulturalists were visiting. Thomas Jefferson and Ben Franklin were frequent guests (both of whom traded seeds with Washington), as was the Marquis de Lafayette, the French general and statesman. Of all the trees, the tulip poplars (Liriodendron tulipifera) were the Marquis's favorite-he believed they were the quintessential American tree, and he brought saplings home to France. These tulip poplars, descendents of those planted by Washington himself, were planted at Versailles and given to Marie Antoinette as a gift. Today, Washington's two tulip poplars still grow at Mount Vernon. The blossoms are too high for bees, so, in 1989, horticulturalists in cherry-pickers hand-pollinated the old, tall trees. An historic organization harvested and distributed the seeds to locations across the country, including some to France, where Marie Antoinette's eighteenth-century tulip poplar had fallen in a storm.

Anna Laurent is a writer and photographer. Her work explores how we look at plants, and how those plants behave.