How to plant, care for, and use birch trees in the garden By Anne Balogh

It’s rare to find a deciduous tree that makes a big impact in the winter garden, but the birch is an exception. With papery scrolls of bark in colors ranging from snow white to cinnamon brown, the birch takes center stage in the garden after the leaves fall and other plants go dormant. But the bark is just one of the birch tree’s many attributes. Learn about the qualities that make it a beautiful addition to the landscape no matter what the season. 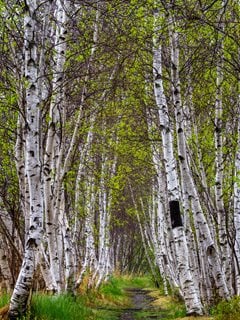 Birches grow on either side of this path in Acadia National Park. Photo by: J.K. Putnam / Alamy Stock Photo.

Birch trees (Betula) are usually denizens of colder regions of the northern hemisphere because they don’t fare well in hot, dry climates. There are about 18 species native to North America, but the ones listed here are among the most common and provide the greatest ornamental value. 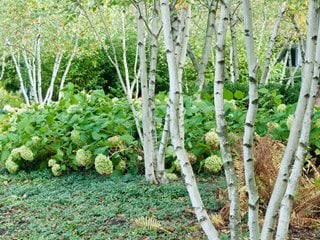 In this garden, ‘Whitespire’ birches were planted in a scattered fashion to appear as if they grew here naturally. Photo by: Garden World Images Ltd / Alamy Stock Photo.

The best time to plant birch trees is in the spring or fall, when the soil is moist and temperatures are cool. If planting in the fall, allow at least four to six weeks before the ground freezes to give the roots enough time to become established (see What to Plant in Your Fall Garden).

Because birch are shallow-rooted, they prefer a location where the soil remains cool and moist while exposing the canopy to ample sunlight (about 6 hours daily). The ideal spot is the north or east side of a building, where the tree will receive full sun in the morning and some shade during the afternoon.

Birch can thrive in a wide range of soil types, really only objecting to extremely wet or dry conditions, says Paul Bartlett of Stone Lane Gardens, a specialist in birch and alder trees. Some birch will even grow successfully in wet ground as long as it is not waterlogged. Slightly acidic soils (with a pH between 5.0 and 6.5) are ideal, but preferences vary with the species, with river birch favoring a pH below 6.5 while yellow birch is tolerant of alkaline conditions. Here are some tips for testing the pH of your soil: Garden Soil 101.

You can plant birch trees in groups or as single specimens, depending on the space available and your design intent. “There are no strict rules about planting distances, and if space is limited, three trees planted in the same hole can create an effective mini copse,” says Bartlett. If you prefer a multi-trunked tree but can’t find one at a local nursery, he suggests creating the same effect by planting three trees in one hole with their roots almost touching. As the group matures, the trunks will eventually touch at the base.

Most birch are sensitive to drought and grow best in conditions where their shallow root system will be kept cool and moist, especially during the heat of the summer. Keep the soil moist to the depth of the roots, particularly during the first couple of years after planting, by soaking it thoroughly with a hose. Covering the root zone with a 2- to 3-inch layer of mulch will also help to retain moisture.

Birch trees planted in high-pH soils may need supplemental iron to prevent yellowing of the leaves (chlorosis). Applying a low-nitrogen, slow-release fertilizer with iron will help boost the acidity of the soil and improve nutrient uptake.

The bronze birch borer is the most threatening pest of ornamental birch, especially white-barked varieties and trees under stress. Early warning signs of damage are a yellowing and thinning of foliage at the upper crown of the tree and D-shaped holes in the trunk where the borer larvae have made entry. Another common pest, the birch leafminer, feeds inside the leaves of birch trees and can also cause browning of the foliage. See this advice from the Morton Arboretum for preventing, identifying, and treating bronze birch borer and leafminer attack.

The best time for pruning birch is in late fall or winter when the tree is still dormant. Birches will “bleed,” or lose sap, if you prune them in early spring before the leaves emerge. Also avoid pruning birch during the summer when birch borers are active, since they are attracted to fresh wounds in the bark.

The only drawback to white bark is that it may begin to look gray and dingy after time. The solution? Simply give it a good scrubdown with water and mild dish soap. This is a great beauty treatment for older birch trees because it removes the buildup of dirt, lichen, and moss without damaging the bark. See these birch cleaning tips from the Chicago Botanic Garden.

USING BIRCHES IN THE GARDEN

Check out some of these popular birch cultivars: 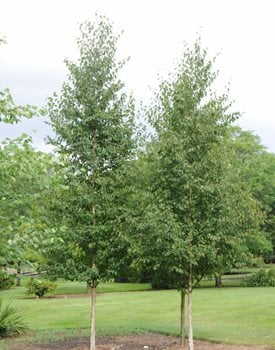 An all-season beauty featuring snowy white exfoliating bark, radiant yellow fall foliage, and a shapely oval form with a low canopy. Has greater heat tolerance (to Zone 7) than is typical of the species. 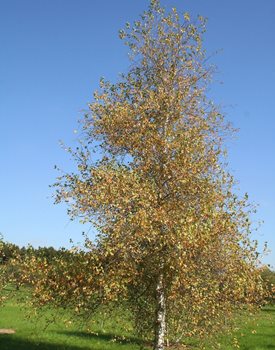 This tree's chalky white bark doesn't exfoliate but instead gets brighter as the tree matures, punctuated by black triangular patches that form under the branches. 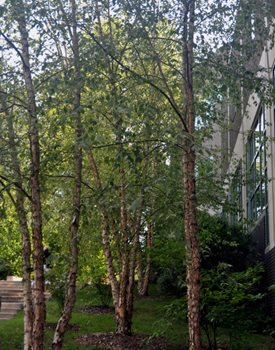 As the name implies, this cultivar is bred for heat tolerance (to Zone 9) as well as better insect and disease resistance. Glossy olive-green leaves turn a buttery yellow in fall, with winter showcasing the pronounced exfoliation of its papery salmon-pink bark. 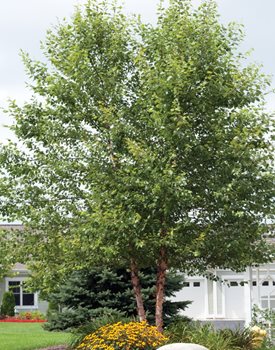 An exceptionally stunning cultivar with a creamy white outer bark that peels away to reveal shades of salmon and taupe. A good substitute for white-barked birch in hot and humid areas (to Zone 9). Also one of the fastest-growing birch trees, adding 30 inches or more to its height each year. 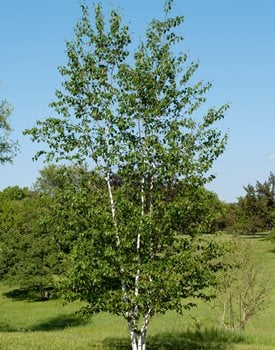 With a name befitting of its ethereal beauty, this trademarked North Dakota cultivar features showy porcelain-white bark and outstanding golden-yellow fall foliage. Especially breathtaking in winter against a backdrop of evergreens. Superior adaptability and stress tolerance make it a good choice for the low-maintenance garden.

This extremely cold-tolerant (down to Zone 2) dwarf birch stays much smaller than its relatives. Foliage appears in shades of yellow, red and orange, and turns chartreuse through the rest of the season. 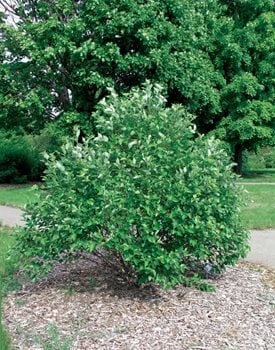 This unique dwarf cultivar, introduced by Chicagoland Grows®, is more compact and rounded than most birch and a good alternative for small-scale gardens, where it can be used as a specimen plant, a hedge, or in a shrub border. With colorful cinnamon and salmon-pink bark and a dense branching habit, it becomes the center of attention in the winter landscape.