Growing Rhododendrons & Azaleas in Your Garden

Learn how to plant, prune and care for rhododendron and azalea plants By Sarah Hutchinson 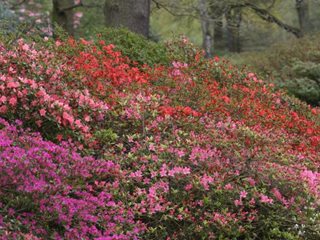 Rhododendrons can be grown in Zones 4-9; however, the most variety is available in Zones 5-8.

There are eight subgenera of rhododendrons to choose from—some are tall like trees, others are more bush-like, some are evergreen others are deciduous.

Here are the five most commonly sold types of rhododendrons:

The mature size of a rhododendron varies depending on the species and cultivar. Some are as small as 18-inches by 18-inches, while others grow to 20-feet by 20-feet. “It used to be that everything would be six feet and taller after ten years,” says Michael Martin Mills, former president of the Greater Philadelphia chapter of the ARS. “Nowadays, you can even find elepidotes that will be no more than three feet tall in that time.”

Peak bloom generally occurs in midspring; however, some rhododendrons bloom as early as March and others bloom as late as July.

Rhododendrons do best in partial shade or filtered light, especially those with large leaves. Tiny-leaved alpine and dwarf species are best in bright sun.

The damp, mild climate of the Pacific Northwest is perfect for growing rhododendrons; while, growing rhododendrons in colder climes, especially the Northeast, can be a challenge. “We often envy people out West because they can grow things we can't,” says Philadelphia's Michael Martin Mills. “A lot of Asian species and their hybrids can't survive our cold winters.” 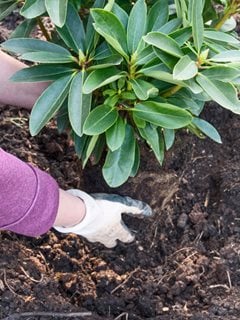 Whether you live in a mild, cold or hot climate will determine what time of year is best for planting rhododendrons. Photo by: John Swithinbank / Alamy Stock Photo.

The American Rhododendron Society (ARS) recommends the following planting times based on your climate.

In addition to filtered shade and good drainage, pick a spot with protection from the wind. The ARS recommends that you avoid planting rhododendrons near concrete because it creates alkaline soil conditions that are detrimental to their development. Furthermore, don't plant “rhodies” near other surface roots that compete for space, water and nutrients

Rhododendrons thrive in acidic soils (pH 6 and lower) that are light, well drained, and rich in organic matter. “They actually like to grow on top of the landscape, as opposed to deep in the ground,” says Jenkins Arboretum's Harold Sweetman. Amending the soil with organic matter such as leaf mulch or fine bark will help both the acidity and drainage. 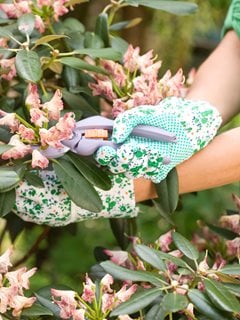 When deadheading, be careful not to remove the buds or shoots below the flower cluster. Photo by: Agencja FREE / Alamy Stock Photo.

Due to their shallow, fine roots, rhododendrons require regular watering through dry periods. They will show signs of drought stress much sooner than plants with deeper roots. Keep the soil consistently damp, but don’t let it become soggy.

Rhododendron shrubs can be pruned to show off their sculptural trunks or to give an arched or cascading effect. Do your pruning right after they finish blooming and be careful not to cut off next year’s buds (rhododendrons bloom on old wood).

Proper soil preparation before planting, along with regular mulching with organic material means extra fertilizer is usually unnecessary. If you think your soil is no longer up to par, apply a fertilizer designed for acid-loving plants in late winter or early spring. If you’re having a specific problem, check out these recommendations from ARS.

If your rhododendron has outgrown its spot, don’t worry, its shallow roots make for easy transplanting.

The best way to prevent damage to your plants is to make sure they are properly planted and well maintained.

Rhododendrons are susceptible to the following diseases:

The following insects can be a problem:

Here are a few tips for incorporating rhododendrons into your garden: 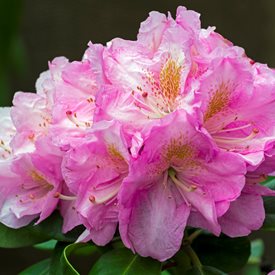 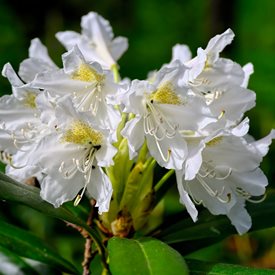 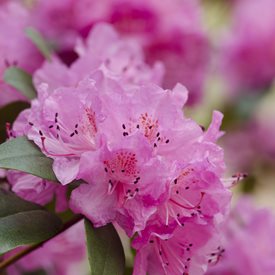 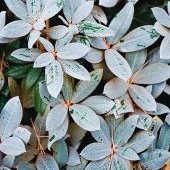 Flower: Funnel-shaped and lavender-pink with up to 20 blooms per truss. 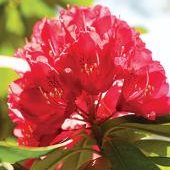 Habit: Upright and taller than it is wide. 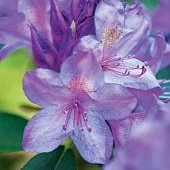 Flower: Vibrant Dark shade of blue that appears in clusters of three and four.

Leaves: Small (this is a lepidote) and dark green. 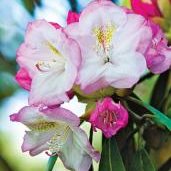 What’s the difference between rhododendrons and azaleas?

Azaleas are actually a type of rhododendron. While they are very similar in shape to other rhododendrons, they can be differentiated by their hairy leaves and five stamens (instead of the usual ten).

According to the National Capital Poison Center, serious poisoning is unlikely when small pieces of rhododendron or azalea are eaten. However, life-threatening symptoms can occur when large amounts of these plants, or honey made from them, are consumed. The Center recommends watching children and pets closely when outdoors to prevent this from happening. See more Common Poisonous Plants for Dogs and Cats.

Why does my rhododendron have yellow leaves?

Wherever soil tests neutral to alkaline (i.e., yielding a pH reading higher than 7), rhododendrons will be hard to grow. When the pH is too high, their leaves turn yellow. Try lowering your soil’s pH by digging in organic matter. If this doesn’t work, try an above-ground growing mix for rhododendrons made from 50 percent well-rotted manure, 40 percent high-quality topsoil, and 10 percent shredded leaves, worked together with a 5-inch layer of peat moss.

Why doesn’t my rhododendron flower?

Failure to bloom is often caused by one of the following two factors: Cold weather kills their flower buds, or they aren’t getting enough direct sun. Pick a rhododendron variety that has been proven hardy in your area and plant it in a location with an eastern or southern exposure.

WHERE TO SEE RHODODENDRONS

Visit the following gardens to see rhododendrons at their finest: