Ferns are some of the oldest living plants, growing in a wide range of cold, temperate, and tropical climates around the world. There are at least 12,000 species, from miniature to towering tree forms. These ancient plants, which evolved before flowering plants, reproduce from leaf spores rather than seed.

There are many fern types that can thrive in your landscape. Most ferns prefer shady, moist conditions and are low maintenance, with few pests or diseases. Ferns pair well with many other shade plants, as a serene green backdrop or taking center stage. Here are some of the best outdoor ferns to grow, along with outdoor growing tips.

On this page: Types of Outdoor Ferns | Growing Ferns Outdoors

Ferns can be hardy or tropical, with evergreen, deciduous, herbaceous, or semi-evergreen forms. Here are some different types of outdoor ferns to grow: 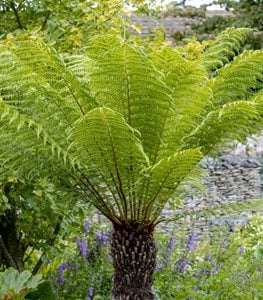 This evergreen tender perennial has a tall tree-like trunk with large finely textured fronds that create an umbrella-like canopy. Use as a dramatic focal point in a Mediterranean-style landscape, in borders or containers. 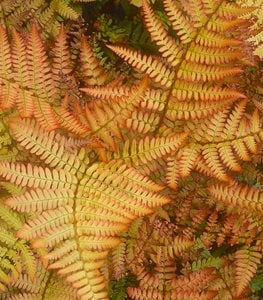 This colorful fern is named for the coppery-orange tones that occur on the new foliage in spring, giving it a fall-like appearance. Attractive triangular fronds mature to dark green as the season progresses. Plant this semi-evergreen perennial in a woodland border or container. Suitable for small spaces. 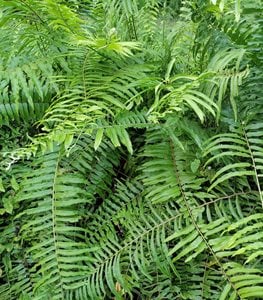 Native to eastern North America, this hardy evergreen fern is named for its resilience to early season snow. Deep green, leathery foliage is deeply dissected, standing upright to form a lush fountain-like crown. Plant in a woodland shade border or as a ground cover. Cut fronds can be used in Christmas floral arrangements. 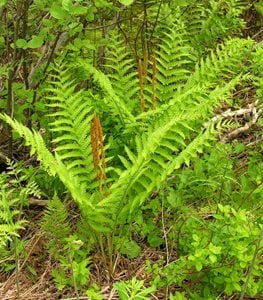 This native deciduous fern produces upright spore-bearing fronds that that turn brown, with sterile green fronds that emerge around the base. Cinnamon fern is named for the cinnamon-colored fibers found near the base of the fronds. Mass this moisture-loving deciduous fern along a stream or pond, or in a shade border. 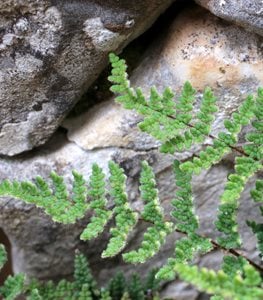 One of the few sun-loving ferns, this exceptionally drought-tolerant native occurs on rocky outcrops and crevices in the east, midwest, and southern U.S. The finely dissected olive-green fronds and compact habit make this a good companion for alpine plants. Prefers gritty, well-drained soil. Plant in a rock garden, dry border, or container. Evergreen in milder climates and deer resistant. 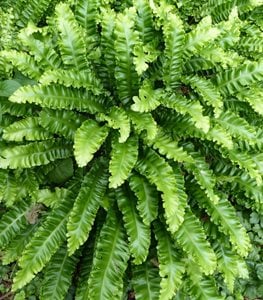 Sword-shaped rippled fronds are undivided for a robust appearance. The bright green foliage forms a neat clump, with brown spores creating a distinct ribbed pattern on the undersides. Use this diminutive evergreen fern in a rock garden, container, as edging, or massed as a groundcover. 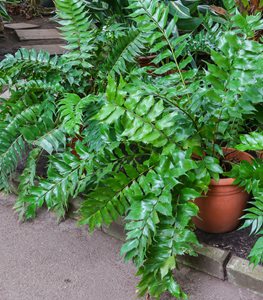 Holly fern is named for the resemblance of the glossy leaves to holly shrub. The thick leathery fronds stay evergreen in warmer regions. Plant in a shade border, rock garden, or naturalize along a pond or stream. 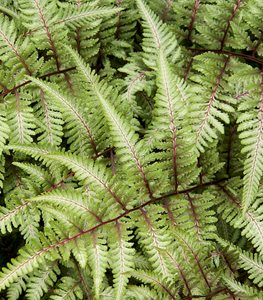 Also known as painted lady fern, this reliable deciduous perennial is grown for the patterned foliage in shades of silver, green, and burgundy. Pairing well with many other shade-loving perennials, Japanese painted fern is versatile in woodland borders, mass plantings, as pathway edging, or in containers. 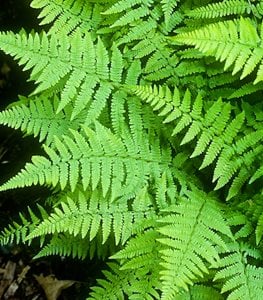 Lady fern produces vibrant green triangular fronds with green, red, or purple stems. This hardy deciduous fern is low maintenance and free of pests and diseases. Naturalize in a woodland border, or along a stream or pond. 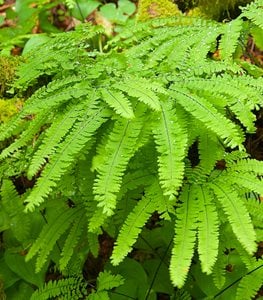 Delicate feathery green fronds add fine texture to the landscape. This deciduous perennial can be naturalized as a ground cover or in rock walls where moisture is present. Plant in a shady woodland border, rain garden, or container. May also be grown as a houseplant. 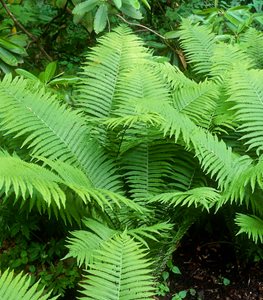 The long feathery fronds are reminiscent of ostrich plumes, hence the common name. New growth unfurls gracefully in spring with a vase-shaped habit that adds elegance to the landscape. Naturalize this hardy deciduous fern in a woodland setting, bog garden, or near a pond or stream. 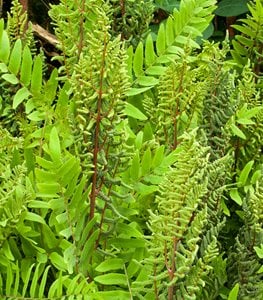 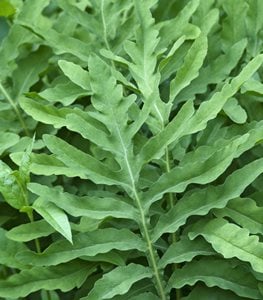 This hardy deciduous fern is named for its sensitivity to frost. Deeply lobed pale-green fronds emerge in spring from rhizomes, with fertile fronds turning brown in late summer. Grow this easy-care perennial in a cool moist location such as a bog, pond, or water garden. 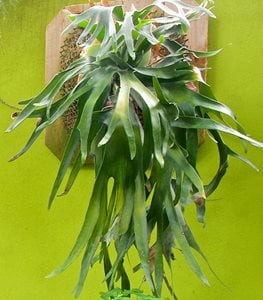 Staghorn fern, named for the thick green fronds that grow in an antler-like structure, is a slow-growing epiphyte typically grown on a plaque. This tropical, native to Australia and Asia, is slow growing, but becomes an impressive size once it reaches maturity. Display as a decorative accent on a wall or fence outdoors in warmer months and overwinter indoors as a houseplant. 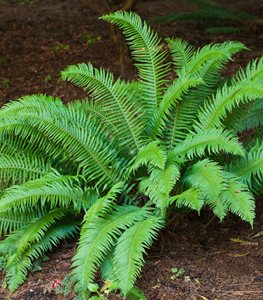 Native to western North America, this fern is characterized by long, lance-shaped foliage with deeply dissected leaves. Plants are evergreen or semi-evergreen, with dense clumps of fronds emerging from a crown of scaly rhizomes. Grow underneath shade trees or naturalize in a woodland garden. Adaptable to different soils and is somewhat drought tolerant.

There are many fern varieties available to home gardeners that are suited to outdoor conditions. Some tender ferns can be overwintered indoors as a houseplant in colder climates. When given the right conditions, ferns are easy to grow. Needs vary depending on the variety, so research individual ferns to make sure you are giving them the best care. Here are some basic growing tips:

Light: Choose a partially shaded site such as underneath a tree or on the north or east side of a home. Some ferns prefer more light, while others can tolerate more shade. Full sun may cause leaf scorch.

Soil: Provide well-draining soil that is amended with compost or other rich organic matter. Most ferns prefer a slightly acidic pH. For containers, use a high-quality, all-purpose potting mix and make sure pots have adequate drainage holes.

Water: Ferns prefer moist soil, though not soggy. Allow soil to dry out slightly in between waterings. Containers dry out more quickly, so will need more frequent water.

Fertilize: Ferns need little or no supplemental fertilizer. In early spring, mulch around the base of plants with a thin layer of compost, pine bark, or pine needles. 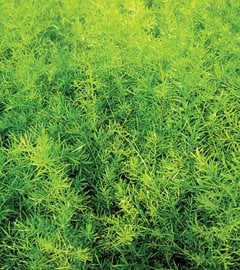 WHAT ABOUT ASPARAGUS FERN?

While not a true fern, asparagus fern (Asparagus spp.) is grown for its feathery green leaves that create an airy effect. This tender herbaceous perennial can be grown outdoors year-round in frost-free zones, treated as an annual in colder zones, or grown as a houseplant. Display in a hanging basket or container.

Note: There are several species of asparagus fern, with some listed as highly invasive in many areas when grown outdoors. Check locally to see if this is an issue where you are. 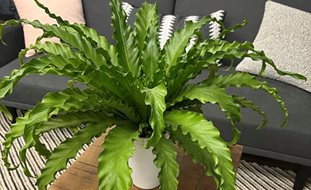 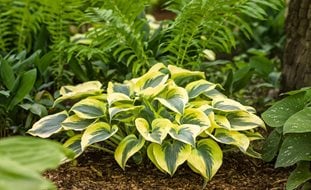 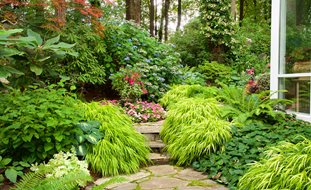