In New York City, the backyard of a beloved culinary shrine gets a much needed face-lift from GARDEN DESIGN and partners-we share what we learned about renovating a garden with ten useful tips. By Claire Lui

On a leafy street in New York City’s Greenwich Village stands a brownstone that was once the home of James Beard and now is the headquarters of his namesake foundation. Beard, a chef and author, was a key figure in 20th-century American cooking, helping to transform dining culture with his cookbooks, articles, and the first television show about food, 1946’s I Love to Eat. A droll man of obvious appetite, Beard once declared, “I believe that if ever I had to practice cannibalism, I might manage if there were enough tarragon around.” He had a circle of fabulous food-loving friends and would take any excuse to entertain, so his four-story home’s garden became the site of now-legendary dinner parties. 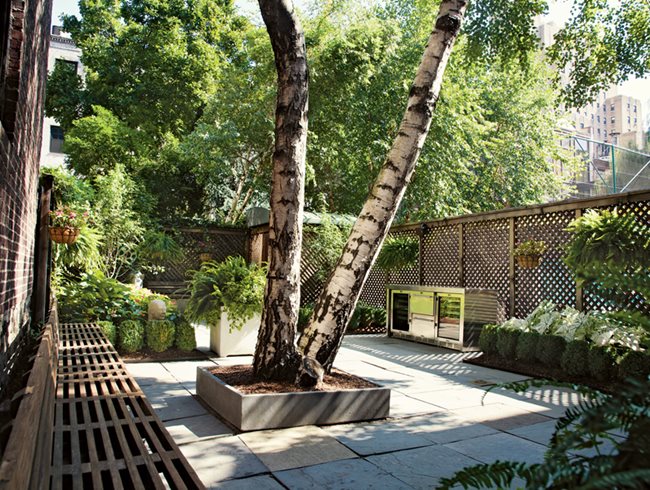 The garden of the James Beard Foundation, on Manhattan's West 12th Street, is ready now to welcome guests in style. A new True outdoor refrigerator and prep area extends the foundation's storage and workspace. (Photo by: Robin Blair Riley)
SEE MORE PHOTOS OF THIS GARDEN

The mission of the James Beard Foundation, launched in 1986, is to “celebrate, nurture, and preserve America’s diverse culinary heritage and future,” and it does so with educational programs, expositions, and, most agreeably, regular dinners at the house. Not much has changed at the building since Beard passed away in 1985. Its cozy rooms are filled with memorabilia and personal photos, and meals there, prepared by visiting chefs, have an intimate feel. Over the years, though, the garden deteriorated from shabby chic to just plain shabby. The foundation had a small budget for its upkeep, barely enough to make basic repairs. So this spring, Garden Design, partnering with landscape designer Paul Keyes and a number of generous individuals and corporations, sponsored a renovation.

This magazine regularly chronicles the stories behind the world’s most impeccably designed and executed gardens. Nobody understands better than our editors how much skill, vision, and expertise is required to create great outdoor spaces. Nonetheless, collaborating on this garden makeover was a bracing reminder of just how challenging exterior renovations can be—even ones conducted on modest budgets and small scales (the Beard garden measures 45 by 22 feet). Drawing and redrawing designs, scheduling workers, navigating city regulations—these seemingly mundane tasks redoubled our appreciation of all the hard work that goes into crafting a meaningful outdoor space. The project, too, served as a reminder of how incredibly fulfilling such an endeavor can be. “It’s just so much more fun to be out here,” said a beaming Susan Ungaro, the foundation’s president, at an unveiling party held in September. “Beard would have loved it.”

Lindsey Taylor, Garden Design’s style director, supervised the entire project with Keyes. Both have overseen numerous renovations and noted that the logistical challenges on this small makeover mirrored those on even the biggest outdoor designs. We asked them to describe lessons learned at the Beard house that would apply to planning any project. 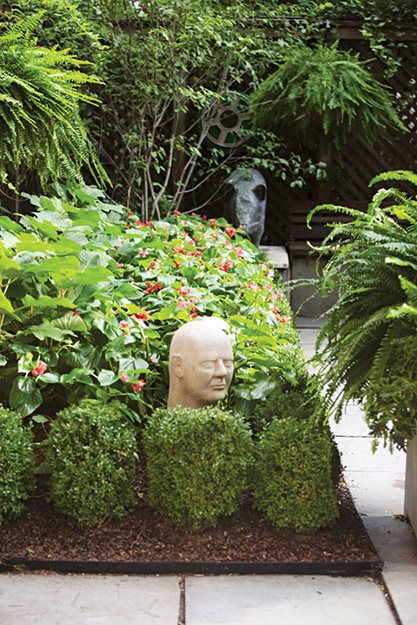 A bust of James Beard gets a fitting spot, nestled in the garden and in full view from every angle. (Photo by: Todd Coleman)
SEE MORE PHOTOS OF THIS GARDEN

“My motto is: Come up with the plan first and then figure out how you’re going to get there,” says Taylor. That’s exactly what she did on the Beard project, enlisting her sister, Toronto-based landscape architect Victoria Taylor, to help draw up the first blueprint for the redesign. “It was very ambitious and too expensive,” Keyes says. “But you can’t make a design based on just a number. Instead, make a plan based on what you want. You can always adjust your budget by spreading it out over time or by altering individual elements within the design.”

When Taylor and Keyes got the budget for the project, they immediately began adapting the design to meet the numbers. They eliminated some elements but were able to make others work. “We got creative and found cost-effective solutions,” says Taylor. And, Keyes adds: “Instead of buying all new benches, we sanded and stained the ones that were there. At first we thought we needed new pavers, but then we found that we could easily wash and reset the old ones.”

3. Brainstorm with the pros

The general consensus was that the birch tree in the middle of the garden had to go, but Bartlett Tree Experts, which also donated services, didn’t agree. Taylor found the back and forth with Bartlett particularly informative. “It was interesting to hear someone who specializes in trees pointing out the uniqueness of having such an old tree in the city,” she says. “It actually ended up being much more economical to rejuvenate the tree by thinning out, pruning, and removing one of the major trunks, rather than removing the whole thing altogether—a good lesson in making what you have work.”

Opportunities and obstacles inevitably unfold during garden renovations, so it’s prudent to continually assess the plan throughout its execution. Halfway through the Beard project, Keyes realized the pine needle mulch he’d planned to use didn’t quite work in the garden. “It looked messy,” he says. “So we eventually settled on pine soil conditioner to help create a natural, soft, and environmental cover until the ground cover plants could grow in and cover the flower beds.”

The foundation asked that a bust of Beard, which had been propped on a bench, and a small statue of a pig, which was hidden away in overgrown plants, be kept in the garden. Taylor and Keyes found prominent places for both sculptures, transforming them into visual anchors for the design. 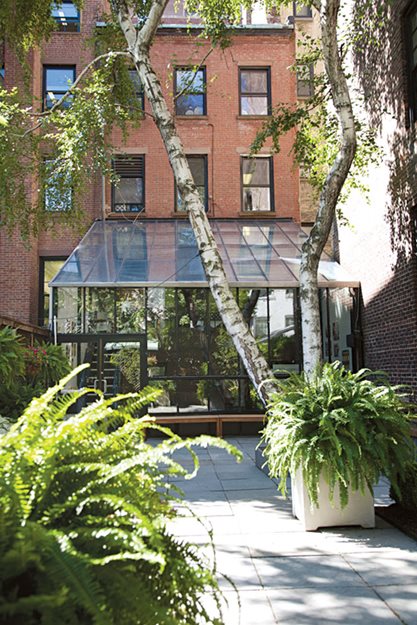 A view looking back at the house shows the glass solarium, an earlier addition, which allows diners to view the garden year-round. (Photo by: Robin Blair Riley)
SEE MORE PHOTOS OF THIS GARDEN

6. Figure out what you can postpone

Lighting is an important part of garden design, but the foundation’s budget did not allow for a permanent installation. So Taylor and Keyes scrapped that part of their plan and suggested Beard employees hang inexpensive string lights. “They give a charming, informal feel to the space and will work just fine for now,” says Taylor. “[Postponing is] a common part of the process,” says Keyes. “Don’t get discouraged if you can’t do everything at once. But even when you have to postpone something, prepare for future installations. If you know you will eventually build an outdoor kitchen, lay pipes and wires so you don’t have to dig everything up when you have enough money to put it in.”

7. Be mindful of neighbors

The Beard garden abuts several residences as well as a primary school. Keyes’ team tried to minimize dust and noise, working on significant construction only after school hours. “It’s important to be considerate, especially in a space like the James Beard garden where the backyards are small and connected,” says Keyes. “It’s much easier to enjoy your garden if your neighbors still like you after its renovation.”

Everyone uses their outdoor spaces differently, and the sooner you identify your primary needs, the better. The foundation needed outdoor refrigerators, both to store food for dinners and to prep and serve drinks and hors d’oeuvres. By factoring in this requirement early on, Taylor was able to make it part of the overall design. In the back of the garden, Taylor and Keyes placed a new full-size commercial refrigerator, donated by True Professional Series, out of sight in an existing shed, where it will be primarily used for storage of ingredients for dinners. True also provided three under-counter refrigerators—two glass-fronted models for beverages and one with pullout drawers for appetizers—that it joined with a custom stainless-steel counter. Taylor placed the handsome piece prominently on the side of the garden. Not only does having the refrigerators make serving much easier, good planning made them a pleasing aesthetic addition to the space.

Most of the foundation’s parties begin at dusk, with pre-dinner cocktails held in the garden. With that in mind, Keyes and Taylor focused on creating a garden with a layout, furniture, and plants that would allow partygoers to circulate with ease. They removed plants like a holly tree, which had become overgrown and gloomy, and selected easy-to-care-for, site-appropriate plants instead, including oakleaf hydrangeas, begonia ‘Dragon Wing Red,’ variegated caladium, and boxwoods in one of the beds and Kimberly Queen ferns and coleus ‘Inky Fingers’ in containers donated by Just Terraces. Vendors that Keyes works with regularly provided all the plants.

Beard had a quirky and gracious sense of style, and his house is a reflection of both his personality and of the neighborhood’s architecture. It was important to consider the legacy of the man and the current style of the house when designing the garden. “It would have been weird to have something stark and modern,” says Taylor. Instead, she and Keyes strived for “something unfussy and welcoming. We call it a ‘modern American garden.’”

For more information about the James Beard Foundation, visit their website.