Experimentation and fun transform the aesthetics of green roofs. By Bill Marken

It is difficult to pinpoint when the living roof jumped from eco-fantasy to eco-solution — there have been startling and innovative green roofs all across the country and in Europe seemingly forever. But in my mind, technology and design caught up with the dream in 2008 when a sweeping marvel of native plants, wildflowers, and engineering was built atop San Francisco’s California Academy of Sciences. Since then, there’s been an inspiring generation of eco-savvy, design-forward residential green roofs — from cactus garden to rain forest, topping everything from chicken coops to full-blown homes. 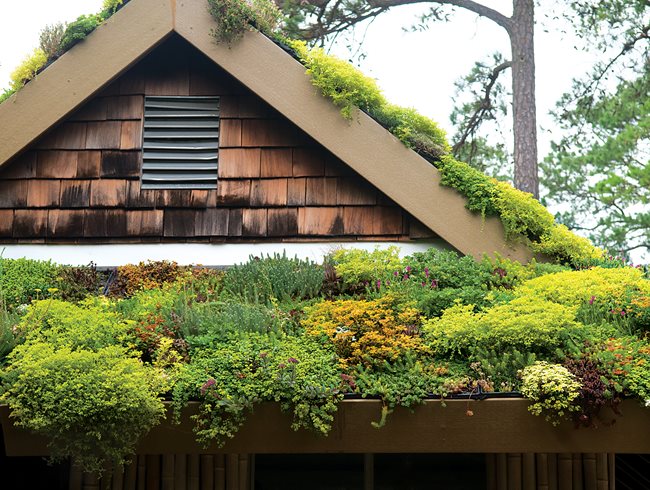 Green roofs have become natural fits for many public buildings as well, thanks to large-scale environmental and financial benefits such as energy efficiency, storm-water management, sound insulation, and the development of habitats for birds and other urban creatures. Most of these projects, like the Academy’s, are standard “extensive” green roofs as now defined: vegetation growing in a shallow (3- to 6-inch) layer of lightweight soil medium, contained in a special assembly system over a waterproof membrane. A smaller residential roof may accomplish some of the same environmental goals, but full financial payback is unlikely at least in the near future; these projects are more about doing good for the environment, beauty, and horticultural interest. Yet with lowered financial expectations comes more design freedom, and a growing number of residential green roofs display plant surprises, innovation, and a delightful sense of experimentation and fun.

In Phoenix, for instance, landscape architect Steve Martino took a playfully literal approach, laying prickly pear pads like shingles on 3 inches of native granite soil on a low, flat, reinforced roof. And in the forests of Washington’s Olympic Peninsula, architect Roy Hellwig of Sequim also gave local natives a try. Turning away from typical earth-bound plants, he covered his flat torch-down roof with mosses, lichens, and ferns mostly collected from his forest property; these are largely epiphytes (air plants), which don’t require soil. Thus the lightweight living roof requires minimal maintenance and looks as connected with the earth as the Hobbits’ homes in The Lord of the Rings. For those who desire a similar look, Hellwig has developed an easy-to-install mat containing a pre-cultivated epiphytic ecosystem that can adhere to most any roof or wall. Currently he’s at work on a similar system suited for subtropical climates. 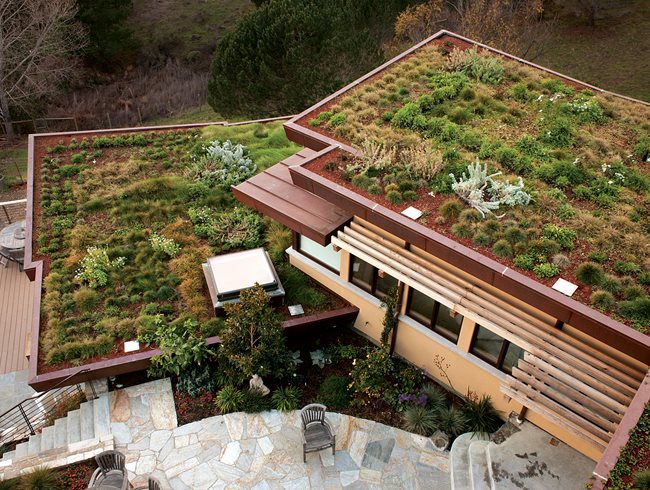 A green roof atop a house in Mill Valley, California, by McGlashan Architecture. (Photo by: Barbara Ries)

Another approach designers take is to mix up the plant palette on roofs. In Sonoma County, California, Kevin Falkerson and Kerrie Lee Cole, the design-and-build team at Symbios, create one-of-a-kind “artisan” roofs that display a surprising diversity of plants. The 3,300-square-foot roof of the house they call Wings of Earth uses nine species of sedum with accents of butterfly-attracting, perennial dianthus and phlox — all visible from the upper floors of the home.

As a model for green roof design, the American Society of Landscape Architects commissioned Michael Van Valkenburgh Associates to create a rootop research garden atop its Washington, D.C., headquarters. The residential-size, 3,000-square-foot display includes two elevated waves. One has low plants (primarily sedums) making use of minimum soil depth; the other includes a mix of sedums with taller, drought-resistant grasses and perennials requiring a deeper soil base. After six years, measurable results are in: The roof plantings retained 77 percent of rainfall that fell during the first data-collecting period, and temperatures have been as much as an astounding 59 degrees lower than conventional black roofs on neighboring buildings. 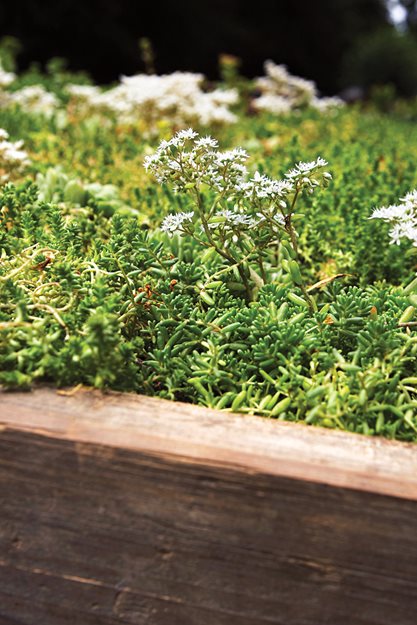 Detail from a roof with mixed planting. (Photo by: Steve Martino)

While do-it-yourself kits have hit the market, developing a sustainable green roof usually calls for a landscape architect or designer specializing in the field — someone who knows the structural demands, assembly systems, drainage, local conditions, plants, and maintenance.

The cost of a green roof is roughly two to four times that of a conventional roof. Government agencies began offering financial incentives to defray costs of residential green roofs — rainy Portland, Oregon, has a notable one. To improve its storm-water management, the city’s “eco-roof incentive” program funds up to $5 per square foot of a project. 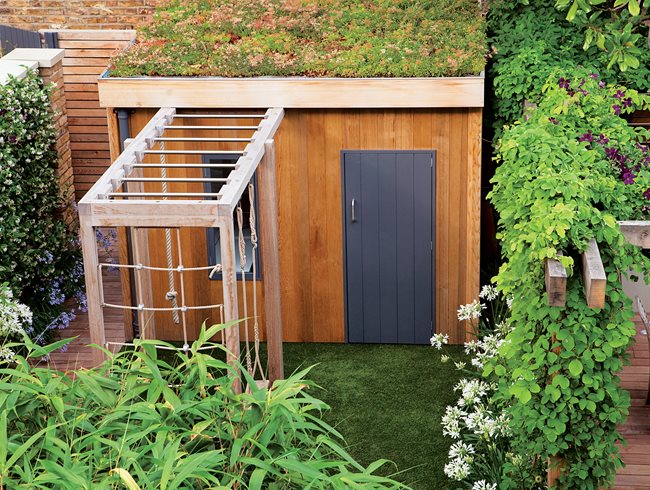 A playhouse in North London. (Photo by: Marianne Majerus)

Plant choices for green roofs, of course, depend on local conditions. In general, roof plants have to be tougher than those growing in the ground; it can be hot, dry, and windy up there, and weed seeds carried by wind and birds can still invade. Irrigation needs are stronger in the Southwest and California. Author Ed Snodgrass — America’s pre-eminent grower of green roof plants and plant supplier for as many as 100 residential green roofs — is an admirer and frequent user of low-growing hardy sedums. He says, “Sedums are metabolically suited to a green roof’s shallow root space; they lose just a quarter of their water compared to other plants.” He also recommends other hardy succulents such as sempervivum, talinum, jovibarba, and delosperma. For accents of color, texture, or height, try perennials such as dianthus, phlox, campanula, potentilla, achillea, and viola, and small bulbs such as muscari and crocus. Annuals planted from seed can fill in while other plants grow. Vegetables probably won’t do well, since they need too much water and richer, deeper soil.

To explore the possibilities of green roofs, Snodgrass suggests beginning with a doghouse or birdhouse. (Longwood Gardens in Pennsylvania has offered just such a course.) “Starting with a birdhouse is a good first step to getting your feet wet and understanding the limits — and opportunities — of growing plants in such a shallow root space,” he says. And then, there’s no place to go but up.?

On the web: Greenroofs.org is a database of advice, research, materials, courses, and a directory of professional designers and installers. Snodgrass’ website, greenroofplants.com, includes helpful advice, especially on plants, along with a gallery of his projects.

The American Society of Landscape Architects provides extensive records of its experimental green roof at asla.org. At hydrotechusa.com, observe the systems the California Academy of Sciences and other major living roofs use.