When Dave Walter and his family swim in the natural pool they built at their Wichita, Kansas, home, the experience is about a lot more than simply cooling off. “You’re floating next to water lilies and cattails, smelling the patches of peppermint, and listening to the sound of the waterfall,” Walter says. Aesthetically too, the pool provides an unconventional experience: It has no traditional edge, just a loose border of river rocks. “It’s more like being in a swimming hole.” 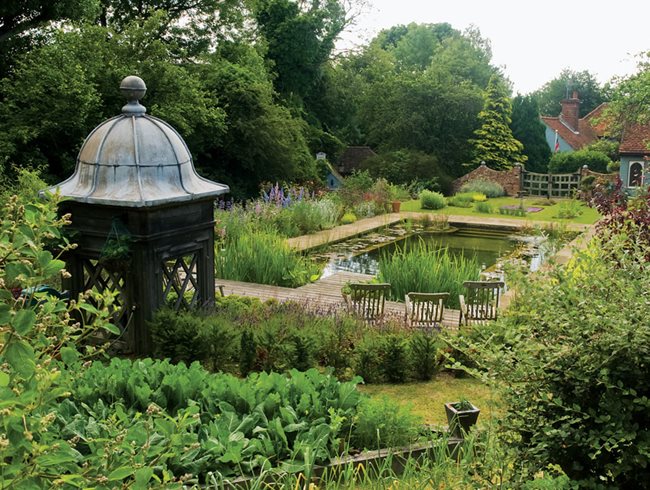 Natural pools, like this one in Switzerland, allow a wide range of plantings in the water and surrounding it. Photo by: Jerry Harpur.

The Walters are part of a small but growing group of Americans who eschew traditional chlorine-cleansed, concrete-decked backyard immersions in favor of natural pools, which utilize aquatic plants to maintain a hygienic swimming environment. Popular throughout Europe since the mid-1980s, when Biotop, an Austrian company, first introduced them to that market, natural swimming pools mimic the self-regulating process of wetlands. Though they vary in design — ranging in appearance from rustic organic to sleek infinity-edged — and exact mechanics, they typically consist of an in-ground vessel lined with an eco-friendly material (sometimes rubber) and divided into zones for swimming and filtration, the latter filled with plants and gravel that, along with beneficial bacteria, help purify the water. Skimmers, filters, and low-pressure, high-efficiency pumps are often incorporated to prevent stagnation and remove sediment and larger objects.

The result? A healthy, attractive, and nearly algae-free environment created through a complex biological system that “has been working pretty well for a few million years,” says Mick Hilleary, founder of Kansas-based Total Habitat, one of the first American-based companies to offer natural swimming pools. 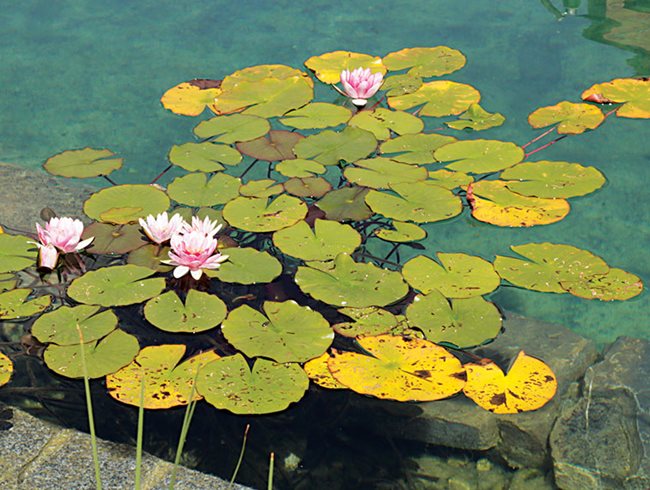 Natural swimming pools have been slow to catch on stateside, experts say, primarily due to lack of awareness. And even with Americans’ heightened attention to environmentally friendly practices, the absence of chlorine and subsequent abundance of plants and microscopic life forms make some people squeamish.

“It’s a living environment in the same way that we have billions of living organisms in our bodies — and that’s a good thing,” says Michael George, head of the newly opened New Hampshire office of Gartenart, a U.K.-based natural pond specialist. “There’s biofilm, plankton, and very low amounts of algae, which can sometimes make the bottom slippery. The majority of algae usually clears up after the first year, but if these types of things bother you, natural swimming pools probably won’t appeal to you anyway.” 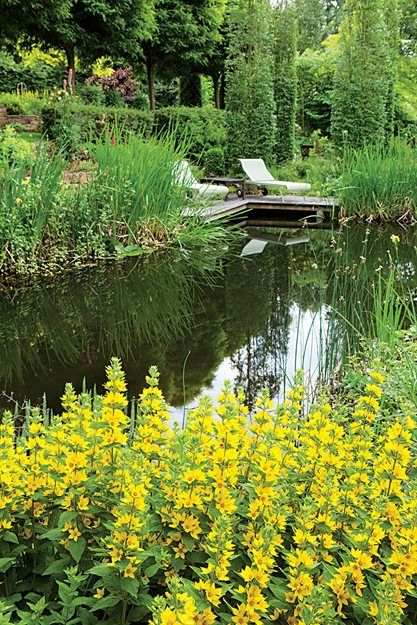 A setting for relaxing or swimming, a natural pool blends into the landscape; in the foreground is Lysimachia punctata (yellow loosestrife). Photo by: Marianne Majerus.

James Robyn, who in 2007 opened a New Jersey office of Bio-Nova, a natural pool company headquartered in Munich, is a zealous promoter of his product. He knows the alternative, having been in the pool business since he was a teenager. Chlorine can irritate the eyes and skin, he observes, noting that some worry it can have adverse effects on health. Robyn adds that traditional pools are “energy hogs when it comes to the constant pump and systems operations and the manufacturing life cycle — meaning what goes into mining, processing, and transporting the chemicals.” Still, these sustainability demerits are often considered less important than what he calls the “American obsession with disinfecting everything.”

Another way to think about the health of the pool experience comes from Michael Littlewood, a United Kingdom-based landscape architect, natural pool expert, and author of several books on the subject. He suggests considering the issue through a holistic lens: “There’s no point in eating organic produce and then bathing in chemicals.” 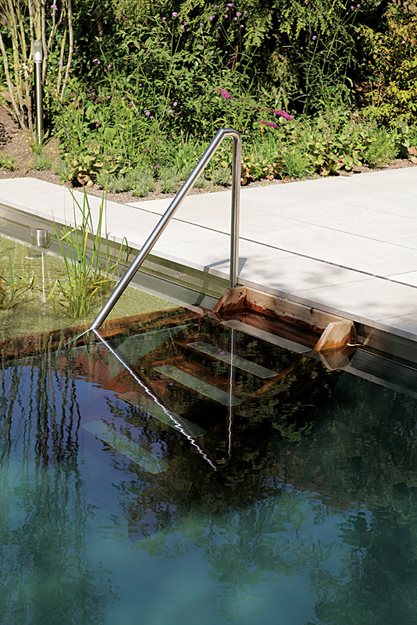 This design juxtaposes the natural and man-made. Photo courtesy of Biotop Austria.

For gardeners, the pools are a natural choice — their only siting requirement is that they should be in a place suitable for growing the plants that help destroy potentially harmful microorganisms and ward off algae by hogging the nutrients necessary for its growth. The vegetation is functional but also aesthetic. By clustering plants in and around the water and adding touches such as natural wood decking, boulders, and sand, the boundary between man-made structure and nature is practically erased. Hilleary, who tends to use hardy, low-maintenance locals like rush and cornflower in pool borders, says, “Plantwise, we try to make things as easy as possible, meaning that you could go away for a month and your aquatic garden would be fine.”

In fact, tending to plants makes up the bulk of natural swimming-pool care. “You still have to maintain them,” says George. “But it’s a labor of love because it’s really just about taking care of a water garden.” In terms of investment, the cost of installation per square foot is comparable to that of standard pools. But natural pools can cost more at the outset due to the landscaping required to fully integrate the feature into its surroundings. Yearly maintainance fees are typically lower because you don’t have to regularly purchase chemicals.

But for a great number of aquatically inclined homeowners, for whom swimming pools represent their joyful engagement with the natural world, this new wave in backyard bathing comes as a welcome alternative. Emerging from a dip to the sight of lily pads and the smell of mint is a lyrical reminder of the interplay of water, earth, and flora.

Taking the PlungePlanting choices for natural pools depend on what species are native to the area, but Biotop’s Anton Schneeweiss recommends three types of in-pool varieties, including:

Though not as active in the cleaning process, swamp plants scattered liberally around the water’s edge help further integrate the swimming pool into the landscape. Upkeep generally only requires occasional topping off, a quick check of the skimmer and filter every few days, and a periodic thinning/deadheading of plants. Before winter, pump and pipes may need to be drained to prevent cracking, but the pool can stay uncovered, a year-round landscape feature rather than a tarp-covered eyesore.