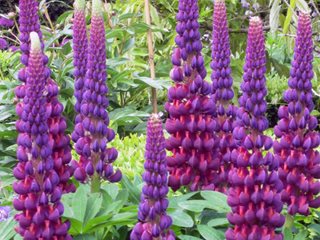 If you’re looking for a showy summer-flowering perennial that will stand out from the crowd, lupine is a sure front-runner. The tall, lush spires of vividly colored flowers are like floral traffic cones, compelling you to slow down and take notice. In addition to their irresistible beauty, lupines are also valued for their ability to flourish in challenging environments, including sandy nutrient-poor soils, high elevations, and areas with cool summers.

“Just being able to grow lupines would be reason enough to move to a cool-summer climate,” says Larry Hodgson, author of Perennials for Every Purpose. “Not only do lupines thrive, but they self-sow with a vengeance.” There are also many varieties that can be grown as annuals outside of their comfort zone.

Typically 4-8; best treated as annuals in Zone 7 and above

Plant lupine in full sun in areas with cool summers, but give them filtered sunlight or afternoon shade in warmer or Southern climates.

Late spring to early or midsummer

A member of the pea family, lupine flowers are similar to those of pea blossoms but are packed tightly together on conical spikes that stand tall and erect above palmate foliage. The blossoms open from the bottom up and often display more than one color on the same plant, in hues ranging from soft pastels to deep reds and violet blues. After the flowers fade, they are replaced by flat pea-shaped seedpods.

Hybrid lupines are the most ornamental of the garden lupines and offer fuller flower spikes and a multitude of color options. Although most are hybrids of several species, they are often pigeonholed under L. polyphyllus.

In addition to the hybrids, there are several lovely wildflower lupines that grow especially well in gardens in certain regions of the country, including wild perennial lupine (L. perennis), a native to the eastern United States; Texas bluebonnet (L. texensis); and golden lupine (L. densiflorus var. aureus), a California native. Once they settle into a hospitable environment, they will grow there indefinitely by self-sowing. 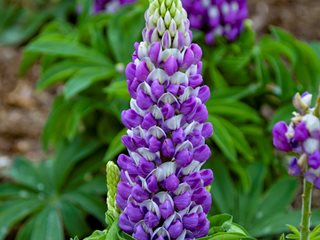 Lupines can be started from seed, dormant bare-root plants, or potted plants, but seeds are easier to find and offer the broadest selection of cultivars. Be careful when buying nursery-grown plants, as lupines have fast-growing taproots that can become constrained if the plants are kept in their containers too long.

Lupines love loose, sandy soil because it doesn’t impede the growth of their deep tap roots. In denser clay soils, loosen the soil before planting by working in compost. Lupines also like slightly acidic conditions. If your soil is too alkaline, you can lower the pH by adding a soil acidifier (sulfur).

If planting lupine from seed, direct sow in the garden in late fall or early winter for blooms the following spring. You can also sow seeds in the spring 4 to 6 weeks before your average last frost date, but your plants will bloom later in the summer. Plant container-grown plants in the spring after the danger of frost has passed.

Lupine seeds have very tough outer shells that need to be softened up before sowing. You can do this by soaking the seeds in warm water for a few hours or by scarifying them with sandpaper or a small file to help them absorb water. (See Growing Perennials from Seed.) Sow seeds at a shallow depth of about ¼ inch under loose topsoil, and keep them evenly moist until they germinate. Seedlings will emerge 15 to 25 days after planting.

Potted lupine plants are typically perennial cultivars that you can put in the ground immediately in the spring. Space plants about 2 to 3 feet apart, and loosen the soil deeply to accommodate the long taproots. Amend the planting hole with organic matter, if necessary, to improve drainage.

After planting lupines, keep the soil evenly moist to ensure good root development. Once your plants are deeply rooted, they can tolerate drier conditions and will only need water during periods of drought. Applying a layer of mulch will help lock in soil moisture and keep the roots cool.

Because of lupine’s ability to absorb nitrogen directly from the atmosphere, they grow quite happily in nitrogen-poor soil without the need for additional fertilizer. In fact, they actually enrich the soil in which they grow.

Deadheading spent flowers will often encourage a second flush of blooms in early fall, especially in areas with cool summers. Once the foliage starts to yellow at the end of the season, you can cut perennial species back to the ground.

Because lupines don’t like being divided and transplanted, the best way to propagate them is by seed. To encourage self-sowing, avoid deadheading and pruning and allow the flowers to form seedpods. Perennial species can also be propagated from cuttings taken from shoots at the base of the plant in spring. Be aware that lupine cultivars propagated from homegrown seed may not stay true to the original color and will often revert to shades of violet.

Aphids and powdery mildew are lupine’s biggest nemeses and can cause a lot of damage by disfiguring the leaves and inhibiting flower development. Horticultural oils are often effective in treating aphids as well as preventing powdery mildew. As a last resort, prune affected plants back to the ground to encourage healthy new growth. 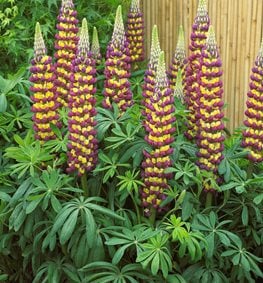 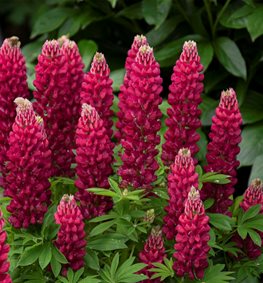 A compact, early-bloomer, this lupine prefers full sun to light shade and cooler climates. The bright red blooms are irresistible to bees, butterflies, and hummingbirds. See more of the Mini Gallery series. 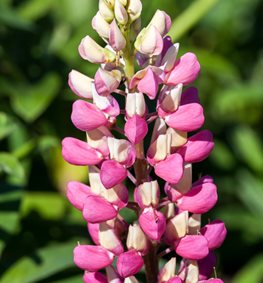 This aristocratic beauty features sweetly scented, rosy pink flowers accented with white banners. It looks magnificent alone or mixed with one or more of the other varieties. It's height at 3 to 4 feet make it a colorful addition to the back of the border.

Tutti Frutti™ lupines give you an amazing array of colors, ready to brighten any bare spots in your garden. The vivacious color combos include dark purple and magenta, persimmon and gold, butter and cream, pink and primrose, two-tone pink, and purple with coral. Tutti-Frutti lupines bloom the first year from seed. 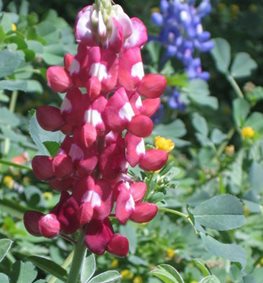 This exceptional annual variety of Texas bluebonnet was originally discovered growing in the wild near San Antonio. Also called maroon bluebonnet, it features distinctive reddish-maroon petals with white tips and bears more numerous flower clusters than its kin. Like most wild lupines, it is drought tolerant and thrives in sandy soil.

This diminutive annual lupine is ideal for smaller gardens. Cultivated from a California native wildflower (L. nanus), it grows quickly from seed and blooms profusely throughout the summer months. The softly colored blooms come in an array of pretty pastels including light blue, pink, white, and violet. 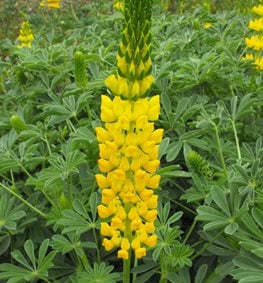 A magnet for a diversity of bees, this radiant golden-yellow wildflower is recommended by The Xerces Society for use in pollinator habitat restoration in its native state of California. It reseeds readily and tolerates drought and poor soils. 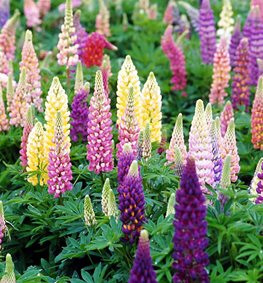 This midsized hybrid blooms about two weeks earlier than other hybrids, giving you nonstop color from spring well into summer. The flowers come in a yummy palette of ice-cream parlor colors including vanilla yellow, grape purple, cherry red, bubblegum pink, and a variety of bicolors.

Few plants are as effective as lupines for creating a strong vertical statement in the garden. You’ll often see them planted in ensembles of mixed colors in cottage gardens, where they have been a staple since colonial times. They also are impressive when planted en masse in wildflower or meadow gardens, especially when allowed to naturalize freely. Although lupines don’t make good container plants because of their long taproots, the bold, spiky blooms are ideal for use as “thrillers” in cut-flower arrangements.