Bring breathtaking beauty to your garden with a non-invasive honeysuckle plant By Anne Balogh Updated: 3/11/2022 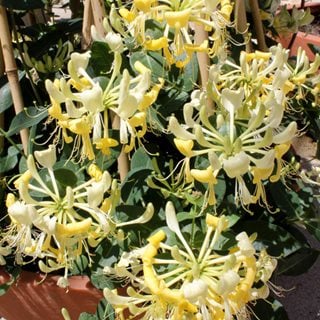 Honeysuckle may be the queen of flowering vines, twining with abandon around arbors and archways, trellises and tree trunks, filling the air with their intoxicating scent. “If I were to have only one trellis, I’d probably plant a honeysuckle,” says Ferris Cook, author of The Garden Trellis: Designs to Build and Vines to Cultivate. “In the daytime and at night, its sweetness fills the surrounding garden, and as long as there is new growth, it continues to bloom.”

The honeysuckle genus (Lonicera) includes both vining and shrub types. Many of the shrub forms are invasive in various parts of the country and should be avoided. However, most honeysuckle vines available to home gardeners are non-invasive and can be safely grown in the landscape.

If the long-lasting, sweetly-scented flowers aren’t reason enough to grow honeysuckles, you’ll find that these versatile vines have many practical uses in the garden as well, from providing dappled shade to serving as a lush privacy screen.

Honeysuckle season is typically May through mid-summer, with some varieties blooming into autumn.

Honeysuckle produces tubular flowers that grow in clusters at the branch tips, in colors from pale pastels to rich reds. Most varieties are heavily scented, with sweet nectar that is a food source for butterflies, bees, and hummingbirds. Often the flowers are followed by small red or orange berries in the fall.

Leaves are round or oval, growing opposite each other. Foliage can be green or blue-green, some with hints of purple or copper tones.

HOW TO PLANT HONEYSUCKLE VINE 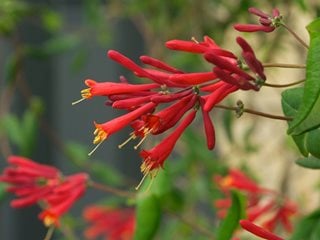 Spring or fall. When the roots of honeysuckle vines are taking hold, they prefer cool and moist conditions. Make sure to wait until after the final frost in spring before planting honeysuckle.

Choose a site with moist, well-drained soil where your honeysuckle plant will receive full sun. Although honeysuckles don’t mind some shade, they will flower more profusely in a sunny location.

Loosen the soil in the planting area and amend with compost or other rich organic matter. Make sure there is good drainage. Tease out roots if potbound. Dig a hole slightly larger than the root ball and place in the planting hole so the top of the root ball is level with the surrounding soil. Fill in the hole with soil, tamp down gently to remove air pockets, and water thoroughly. Water plants regularly until established.

Make sure containers are large enough for mature plants and have adequate drainage holes. Use a high quality all-purpose potting soil that drains well.

Ideal temperature range for growing honeysuckle vine is between 55 and 85 degrees F. Excessive humidity and poor air circulation can cause fungal diseases such as powdery mildew. In hotter climates, provide some afternoon shade.

Honeysuckles also aren’t particular as to soil type or pH, but if the soil drains poorly, amend it with compost before planting so the roots won’t be sitting in standing water.

Water thoroughly after planting, and once a week until established. Mature plants are more drought tolerant, but do best in evenly moist (not soggy) soil. Apply a layer of mulch around the root zone to retain moisture and reduce the need for watering during hot, dry conditions.

Honeysuckles don’t need big doses of fertilizer to produce a bounty of blooms. In fact, overfertilizing will often stimulate foliage growth rather than yielding more flowers. After your plants become established, an annual spring feeding with a general-purpose fertilizer is all they need.

Honeysuckle blooms on old or new growth, depending on the variety, so it’s important to know which kind you have.

For all honeysuckle vines, thin out congested growth and remove weak or damaged stems, which will allow for easier training. To rejuvenate older plants, hard prune plants to about 2 feet in early spring and tie in the new shoots to your support system.

Honeysuckles are seldom troubled by serious pests or diseases, although they are susceptible to aphids and mites, which can easily be controlled with insecticidal soap. Also watch out for the development of powdery mildew on the leaves, especially in damp, humid environments. Pruning and thinning your vines to increase air circulation and light penetration are the best preventive measures. 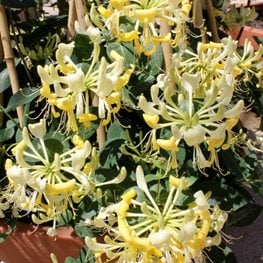 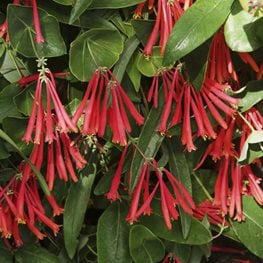 
Mildew-resistant blue-green foliage contrasts beautifully with vivid red trumpets. Lightly fragrant flowers bloom from spring through midsummer, with sporadic rebloom through the rest of the season. 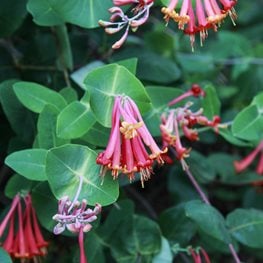 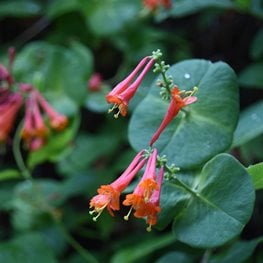 This semi-evergreen hybrid produces scarlet-red blooms from June until the first frost. The leaves join around the stem to form lily-pad shaped disks where the flowers emerge. 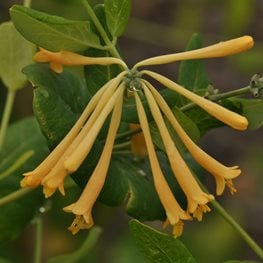 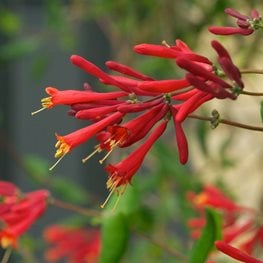 Once of the best red flowering honeysuckle vines, the brilliant ruby-red flowers bloom from summer into fall. This variety blooms on both old and new growth, so it can be lightly pruned right after flowering to encourage repeat bloom. 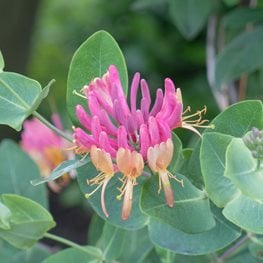 Flowers the color of mandarin oranges look dazzling against a backdrop of coppery brown new foliage that that fades to dark green. Blooms continually from late spring through fall. 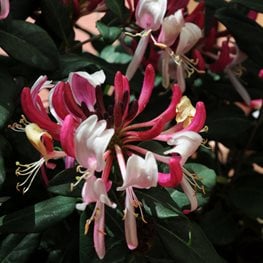 This exceptionally fragrant honeysuckle has dark pink-and-white flowers that turn the color of a ripe peach at maturity. Tolerant of heat, drought, and humidity. The tidy, compact growth habit won’t overwhelm smaller gardens. 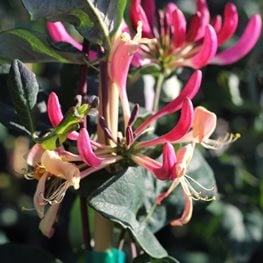 Small enough to grow in containers on a patio or balcony, this dwarf cultivar produces large, multi-colored fragrant flowers from late spring to summer. Drought and heat tolerant, it remains evergreen in frost-free growing zones. 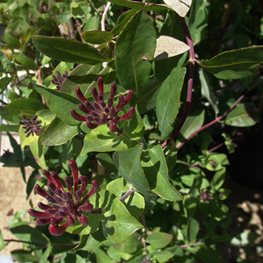 Lavish deep-pink flowers with creamy ivory interiors turn tones of sunset gold as they fade. Dark wine-red berries follow in the fall. Blooms from May through October.

Many non-invasive species of honeysuckle vines have a vigorous, aggressive growth habit, which is sometimes confused with invasiveness. Because they are fast growing doesn’t make them invasive. To find out if a particular plant variety is invasive in your region, contact your local garden center or university extension service.

Some varieties of honeysuckle vine are more deer-resistant than others. Deer tend to graze on plants in early spring when they are hungrier, preferring tender new growth. When honeysuckle is in bloom, deer are more likely to avoid the plants due to the scent, and because other food sources are more available.

Some types of honeysuckles contain glycosides and carotenoids which may be toxic to pets and children.

Most varieties of honeysuckle vines are quick growers, making them valuable as a screen on a fence, trellis, or arbor.

What about cape honeysuckle?

Cape honeysuckle (Tecoma capensis is a tender broadleaf evergreen shrub, not a true honeysuckle, that is related to trumpet creeper (Campsis radicans).

HONEYSUCKLE VINES IN THE GARDEN

For borders and landscapes: Plant on a fence, trellis, or arbor for a quick-growing privacy screen.

For slopes and hillsides: Use as a groundcover along a slope or hillside for erosion control.

For containers: Grow a dwarf variety in a container on a sunny patio, deck, or courtyard to enjoy the flowers and fragrance up close.