Passion flowers are blooming! A genus of about 500 species of vines (and the occasional shrub), Passiflora flowers are distinguished by a characteristic design of radiating filaments and multi-leveled structure. They've long fascinated botanists, gardeners, and even theologians. We've designed a brief primer of several common features—the flower's morphology, and how it gave the plant its name. By Anna Laurent

Summer is a time for lemonade, watering cans, and marveling at a beautiful oddity that creeps up our gates and fences—the passion flower. A genus of about 500 species of vines (and the occasional shrub), Passiflora flowers are distinguished by a characteristic design of radiating filaments and multi-leveled structures. While pollinators (thankfully) understand the beguiling flower, they often seem other-worldly to the rest of us. Passiflora have long fascinated botanists, gardeners, and even theologians. Recently, I've received passion flower photos from a couple friends who hope to know what's going on with the strange flower. In case they're not the only ones, we've designed a brief primer on the passion flower—the flower's morphology and common features, and how those structures came to signify something other than "pollinate" and "fruit," thereby giving the plant its name. 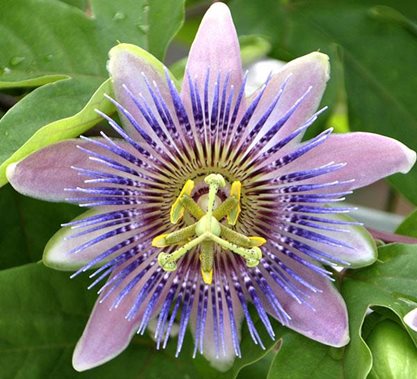 The typical passion flower has five petals and five alternating sepals. While both are similar in size and color, the sepals are distinguished by a green hook, or awn, at the tip.

The corona is composed of thin, colored filaments that radiate around the central stalk. There are two layers, called the radii and the pali. The corona's concentric rings of varying hues are thought to guide pollinators (insects and hummingbirds) to the nectaries at the center of the flower. 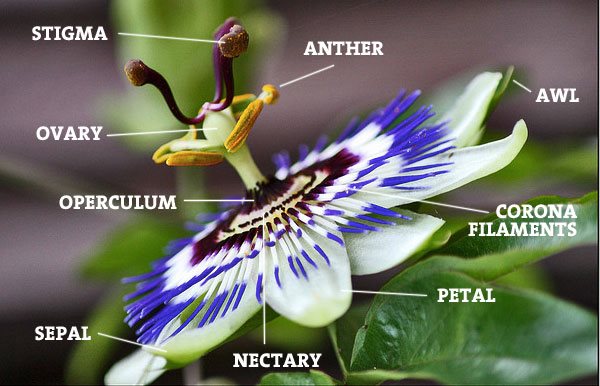 Blue Passion Flower (Passiflora caerulea), one of the most common species. Photo by: Ian Foss / Flickr.

Three stigmas (female organs that receive pollen and direct it towards the ovary) extend above the ovary, where the fruit will be produced. Beneath the stigmas are five anthers (male organs that produce pollen). This arrangement, in which the stigmas are above the anthers, is a mechanism to avoid self-fertilization—there is less chance that the pollen will travel upwards to the stigma, than that it would float downwards and thus self-pollinate (most Passiflora cross-pollinate, though some self-pollinate). When the flower first opens, all anthers are initially facing upwards. Within an hour, the five anthers rotate downwards to face the flower's operculum and corona—and thus the pollinators, who will be below, mining the nectar.

For bees to reach the nectar, they have to get through the operculum, a ring of dark fibers at the base of the central column. Arranged directly over the nectaries, the operculum filaments are a mechanism to discourage nectar robbers. The pollinator must penetrate the operculum barrier to access the nectar, and thus brush against the pollen-laden anthers. In the bee-pollinated P. caerulea, the operculum may serve to diffuse a fragrance emitted by the corona.

Fruits develop in the ovary. Most species develop elongated pods that are two to eight inches in lenght, and an inch or two in diameters. Not all are edible, and some are more popular than others. P. edulis (Purple Passion Flower) is arguably the most famous species. It produces the purple—or yellow—fruits that we commonly call "passionfruit." It is cultivated in warm, frost-free climates throughout the world.

Etymology: From Whence the Passion

I always attributed Passiflora's name to its oft-enchanting aromas and mesmerizing morphologies, evoking the passion of an unbridled summer dalliance. Not to dissuade those with similarly romantic associations, the truth is that the flower was named for something with a bit more gravitas—the Passion of Christ. In the early 1600s, Spanish Christian missionaries adopted the plant as a teaching tool, interpreting a Passiflora flower as a metaphor for Christ's death. In this adapted theological model, the various flower parts each correspond with a symbol of the crucifixion. 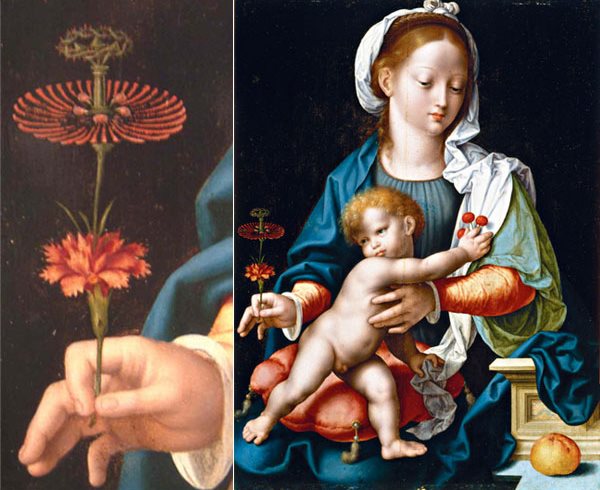 Madonna & Child by Joos van Cleve, c. 1530-1535. A passion flower with a crown of thorns blooms from a carnation (detail). Art historians believe the passion flower was added years later, as the plant was not introduced to Europe until after the artist's death. Why, and by whom, remain a mystery. Photo by: Cincinnati Art Museum.

The palmate leaves symbolized the hands of Christ's persecutors; the tendrils were the whips used in the flagellation; the five sepals and five petals represented the ten faithful apostles (excluding St. Peter the denier, and Judas the betrayer); the five anthers signified the five wounds; three stigmas were the nails used to attach Christ to the cross; the layered radial filaments of the corona symbolized a crown of thorns. Linneaus would later name the flower for its theological translation. 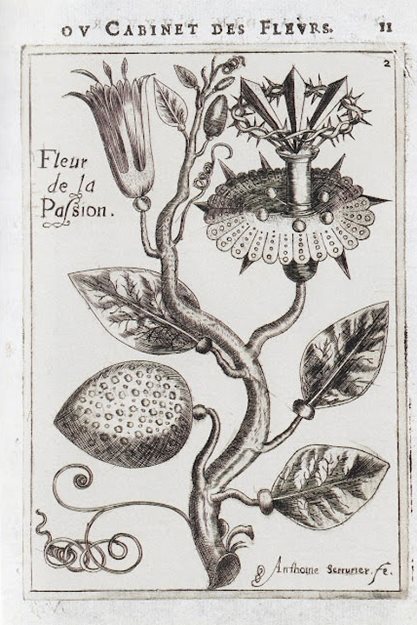 An illustration of "Fleur de la Passion" includes a crown of thorns around the stigma. From Jardin d'hiver ou Cabinet dea fleurs, by Jean Franeau, 1616. 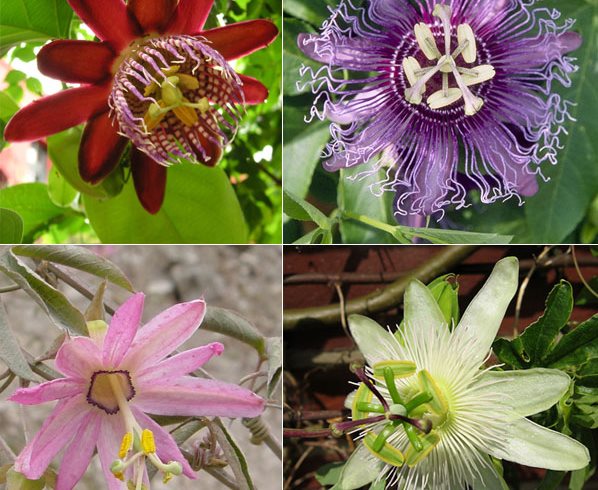