Brimming with clusters of fragrant flowers in spring, the showstopping wisteria vine is loved by many gardeners despite its assertive reputation. An extremely vigorous grower, this perennial can get out of hand easily unless carefully restrained. Here are some tips for cultivating all wisteria has to offer while taming its aggressive growth habits.

To see other flowering vine options, check out our list of 21 Flowering Vines. 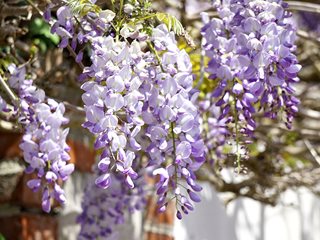 Most wisteria vines begin blooming in spring and may carry on into summer.

When it comes to wisteria there are two types: Asian and American. Asian wisterias are popular due to their impressive flowers, but are aggressive growers. American wisterias are tamer and still have gorgeous flowers. Compare the most common types of wisteria.

Wisteria brings to mind iconic purple flowers, but there are a variety of other colors including shades of white, pink, and blue. There are no yellow wisteria flowers, if you think you’ve seen one it was likely a golden chain tree (Laburnum).

Wisterias are deciduous, which means they drop their leaves in the fall in response to cold temperatures. However, there is another vine commonly called evergreen wisteria (Millettia reticulata), that sometimes causes confusion. 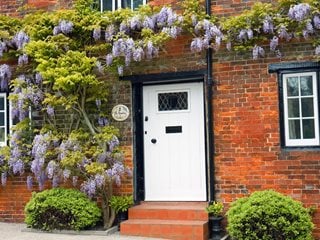 Avoid growing aggressive wisterias near your house, because they can wreak havoc and have even been reported to destroy homes.

Plant wisterias in full sun or partial shade, but make sure the vines receive at least six hours of direct sun daily to encourage good flower development. Also choose a sheltered planting location if you live in a colder climate, since the flower buds can be damaged by a hard spring frost.

Dig a planting hole the same depth and twice the diameter of the plant’s root ball and set the plant level with the soil line. Space your plants at least 10 to 15 feet apart along the support system, because the vines will fill in quickly.

Once planted, wisterias require little pampering to encourage robust growth. During the first year, water regularly until the roots establish.

Wisterias may be slow to emerge from dormancy right after planting and may not leaf out until early summer. The following spring, they will leaf out at the normal time, but don’t be surprised if they don’t produce flowers. Wisterias are slow to mature and may not begin flowering until three to five years after planting.

Wisterias are rapid growers and can shoot up 10 feet or more in a single growing season. That’s great if you want to quickly cover a fence or pergola, but you don’t want the vines to overrun your garden. Regular pruning (once in summer and again in winter) not only keeps wisteria in bounds, it will also promote more vigorous flowering by establishing a framework of horizontal branches and inducing the formation of spurs at controlled intervals.

In July or August, or approximately two months after the plant flowers, cut back the current year’s growth to five or six leaves to remove unruly shoots and create short branches that will bear next year’s blooms. Additional summer pruning is often required. When the plant is dormant in January or February, prune again by cutting back to two or three buds on last year’s growth.

With newly planted wisteria, the first few years of growth are important to establishing the desired framework for the plant’s development. As soon as your wisteria takes off, begin tying selected lateral shoots to its support system and prune back unwanted growth. With older plants, a hard pruning may be needed to encourage new branch development. Do this by cutting back older branches to the main central stem. New side branches will soon replace the gaps and can be tied back into the support system. 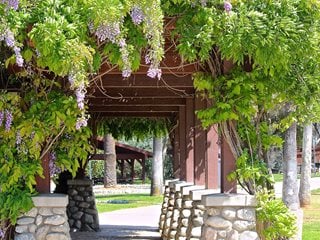 Wisteria requires a sturdy support structure, such as this well-built pergola.

With its climbing agility and fast growth habits, wisteria can completely transform a garden in just a few years, becoming a breathtaking shade cover, privacy screen, or focal point. Wisteria has the greatest impact when trained to grow on pergolas, arbors, and other strong overhanging supports so the long flower clusters can hang freely, creating a stunning floral canopy. In Japan, wisteria is even trained onto massive trellises to form blooming tunnels in spring. You can also train wisteria onto wires mounted on fences or stone walls or drape them over garden benches or arched entryways.

Although you may be tempted to let wisteria twine around the trunk of a tree, its vice-like grip will eventually strangle it. To achieve a similar effect, you can train wisteria as a single-trunk, free-standing tree by staking the thick woody stem of the plant to a sturdy post or 4-by-4 embedded securely in the ground. As the plant grows, remove all unwanted growth along the trunk, allowing only the top to grow. Using the same techniques on a smaller scale, wisteria can be grown in large pots or as a bonsai tree.

Whatever trellising method you use, make sure the system is sturdy. Wisterias will readily topple weak wooden trellises, so use durable materials such as heavy metal pipe set in concrete or pressure-treated or rot-resistant wood beams. Also avoid growing the vines alongside your house, because they can creep under siding and wrap around gutters.

Keep in mind that once wisteria becomes well-established, it can be very difficult if not impossible to move later. Choose your planting location and design intent carefully, because you may not be able to change your mind later.

HOW TO GET YOUR WISTERIA TO BLOOM 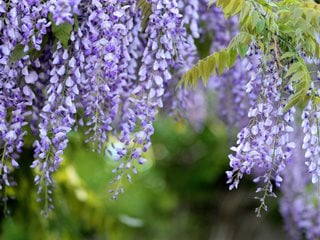 Be patient, a newly planted wisteria may take several years to mature before it begins flowering.

Gardeners are often devastated when their wisteria fails to bloom the first season after planting. With young plants, be patient. Wisteria takes several years to mature and become established before it begins flowering with gusto. However, a lack of flowering can also be attributed to other factors, such as too much fertilizer, improper pruning, injury to the flower buds by frost exposure, or too much shade. Here are some tips from Toronto Master Gardeners for guaranteeing a profusion of blooms:

Here are some of the most popular wisteria cultivars: 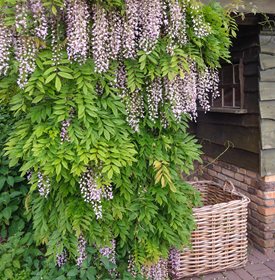 Soft pink 13- to 16-inch flower clusters tinged with lavender. Grows more slowly than other cultivars (2 to 3 feet per year), making it a good choice for smaller gardens. 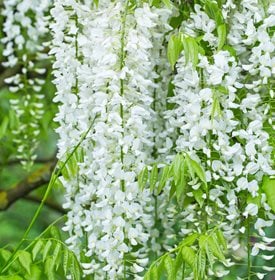 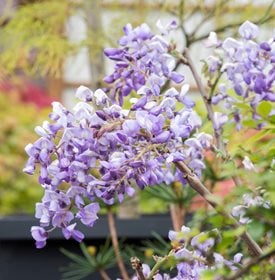 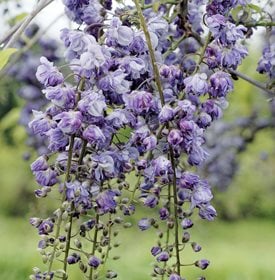 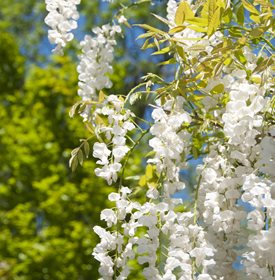 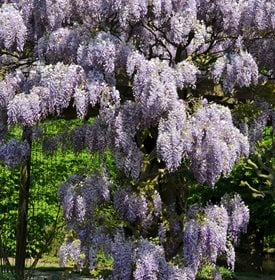 Noted for its prolific clusters of lilac-blue flowers. Typically begins blooming at an earlier age than other cultivars. 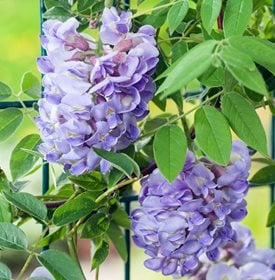 Blooms at an early age, often its first season, with lightly fragrant lilac-blue flowers. Blooms also arrive about two weeks later than other varieties, so the buds are rarely affected by a late frost. 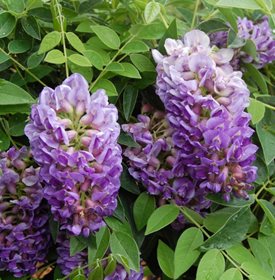 This American wisteria flowers later than Asian varieties, but can repeat bloom through September. Offers a remarkable display of grape-like flower clusters. 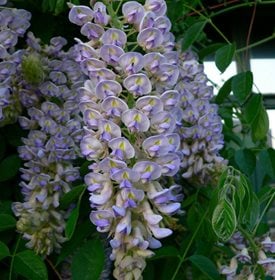 Abundant 8- to 12-inch-long clusters of fragrant lilac-blue flowers on new growth. Blooms at an early age. 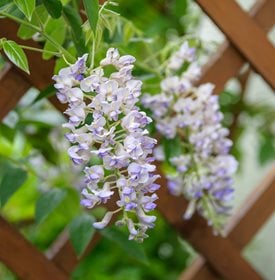 Produces foot-long clusters of lavender-blue flowers in spring, with repeat blooming throughout the growing season once established. 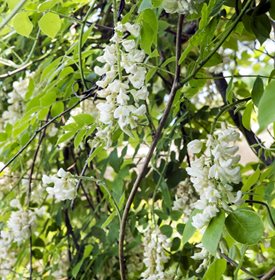 Wisteria floribunda 'Lawrence'
Pale violet-blue flowers. The 12- to-18-inch clusters are loaded with as many as 160 blooms, more than all other Japanese wisteria.
Zones: 5-9

WHERE TO BUY WISTERIA

How large can wisteria get?

Wisteria vines can grow to epic proportions, spreading 100 feet or more under ideal growing conditions. The world’s largest known wisteria, located in Sierra Madre, Calif., was planted in 1894 and covers more than one acre.

Wisteria is a member of the pea family (Fabaceae), and similar to sweet pea vines, it produces long (but poisonous) seedpods after the flowers fade. When the pods ripen and turn brown, they explode with enough force to eject the seeds far away from the parent plant. This is Mother Nature’s way of preventing the overcrowding of seedlings, so they can germinate and grow without competition.

How long will wisteria live?

Planting wisteria is a long-term commitment. If you put a plant in the ground now, it may still be blooming and growing a century later if left undisturbed. One of the oldest wisteria vines, located in Japan’s Ashikaga Flower Park, dates back to 1870.

Q: I love wisteria but am having a hard time with it here in Minnesota. It’s not making much progress up my wooden arbor. - James A. Reider, White Bear Lake, Minn.

A: Your wisteria is root-hardy, but all the top growth it puts on each year is killed by severe winter temperatures. No wonder it’s not getting anywhere on your arbor. The two most common wisterias are W. sinensis and W. floribunda; the latter is a bit hardier. Its flower clusters are longer and more fragrant, but if your plant has never flowered, the best way to tell which one you have is the manner in which it twines: clockwise for W. floribunda, counterclockwise for W. sinensis. If you find you are growing the less hardy species, you might give W. floribunda a whirl, or even better yet, the native W. macrostachya. You might also consider wrapping the new growth in burlap for a little extra protection. If swaddling it is out of the question, you may have to settle on another vine. Incidentally, I hope your arbor is made of strong, thick timber: wisteria’s anacondalike stems have brought down many a finely wrought Victorian porch and gazebo.

Americans seem to have a strong distrust of vines; we grow them much less than other garden plants. It probably comes from a Freudian hang-up about lush, twining, probing shoots and tendrils or, more likely, our fear of the self-important, strangling imported thugs we see taking over in nature - porcelain berry, Hall’s honeysuckle, and kudzu. I’d like to see increased use of vines and more imaginative ways of growing them. Why not plant different vines at the base of your arbor and let them fight it out? You’ll have more interesting foliage shapes and textures and more flowers over a longer period of time. And, should some prove not as hardy or as vigorous as others, you won’t be left with a bare arbor. Why not be Darwinian and let the tough Minnesota winters weed out the weaklings?

Try trumpet creeper — the plain red species (Campsis radicans), not the named varieties that are less hardy — for its deep-green foliage and wonderful junglelike red flowers in late summer. It’s vigorous and can climb up a wooden arbor unassisted. Native Dutchman’s pipe (Aristolochia macrophylla) is a gamble in hardiness, but give it a try. It’s rambunctious and casts a deep shade with its large, tropical-looking leaves. A hardy, fast-growing native whose foliage turns scarlet in the fall is Virginia creeper (Parthenocissus quinquefolia).