Bold, iconic, exotic: Palms are essential for that tropical look and are even making a splash in cooler climates By Jason Dewees

Palms are a complete sensory experience. The rustle of fronds in the wind, curving shadows, textured trunks, scented flowers and luscious fruits create an intoxicating atmosphere. One of the earliest cultivated fruit trees, the palm seems on loan from Eden. But palms are often overlooked as design elements, becoming the equivalent of background noise. Ask anyone to draw a palm and what do you get: a long stem, a tuft of leaves, maybe a couple of coconuts—and there, you’ve captured it, right? Not true. The secret about palms that garden designers from Vancouver to Cartagena to Singapore are learning is that among the 2,500 species of this diverse plant family are varieties for nearly every landscape need, making them a tremendous garden resource that has essentially been hiding in plain sight. 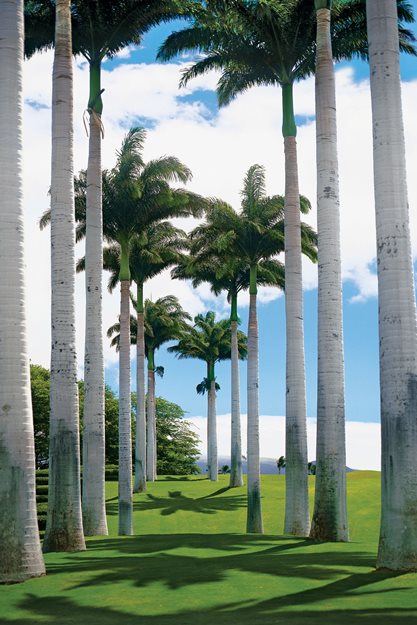 Unparalleled as avenue trees and tropical staples, palms have been invaluable to garden designers since ancient Persia. Now designers within and beyond the tropics are using them in fresh ways. Here a classic double row of royal palms (Roystonea oleracea) creates drama in this Hawaiian landscape. Photo by: Lisa Romerein.

Indeed, no tropical look is complete without palms, but they go far beyond the iconic double row of palm trees lining Hollywood Boulevard, or postcard-perfect coconut palms silhouetted against the sunset. Their bold, symmetrical foliage, uniformity, varied textures and sizes, and diverse growth habits make them uniquely compelling garden subjects. While designers in the tropics and subtropics have a wide array to work with, even people in England, the Pacific Northwest and the Southeast are using what Linnaeus considered the “prince of plants” to wondrous effect. 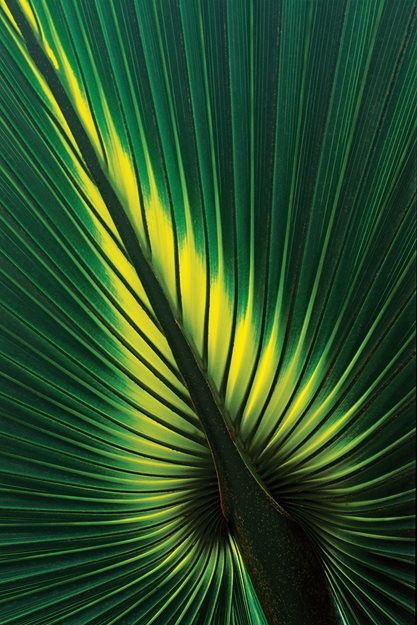 The bold architecture of a palmetto leaf transmits light and color. Photo by: John Glover.

Nearly every garden needs vertical elements to add volume and perspective, and the simple upright form of many palms is invaluable from Honolulu to Barcelona to Savannah. The solitaire palm (Ptychosperma elegansz) performs well in subtropical and tropical climes, while the Mexican fan palm (Washingtonia robusta) speeds skyward and tolerates frosts in warm-temperate zones as well. And thanks to the hardiness of species like the Chinese windmill palm (Trachycarpus fortunei.), that verticality can be exploited even in places like Seattle, Tokyo and London, where winter brings an occasional dusting of snow incongruously covering lacy fronds. 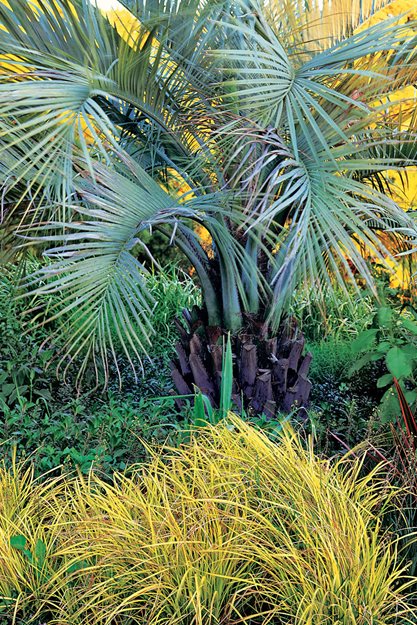 The all-important garden element of texture is another stronghold of palm trees, literally from the ground up. Witness the hairy trunks on the old man palm (Coccothrinax crinita), the smooth green rings on the bamboo palm (Chamaedorea seifritzii) and kentia palm (Howea forsteriana), and the fiercely thorned basketry of the zombie palm (Zombia antillarum) and Brazilian needle palm (Trithrinax brasiliensis). 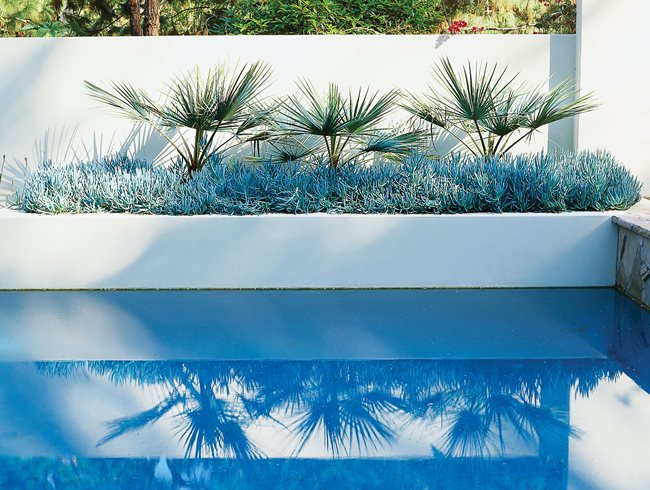 Water-wise Mexican blue palms (Brahea armata) thrive in a planter, casting their reflection into the pool below. Photo by: Steve Gunther.

Color is the stealth asset of the palm family. In addition to an infinite range of greens, cold-hardy species like the Mexican blue palm (Brahea armata) and pindo palm (Butia capitata) confer icy blue or blue-green foliage onto a garden palette in temperate climates like California and the Southeast, while the heart-stopping sealing-wax palm (Cyrtostachys renda) adds a cluster of lipstick-red stems to truly tropical landscapes. The unsung fruits and flowers of palm trees range from gold, green, black, red and purple, worthy of garden scrutiny and ideal as cut material for indoor arrangements, along with their foliage and woven leaf bases. 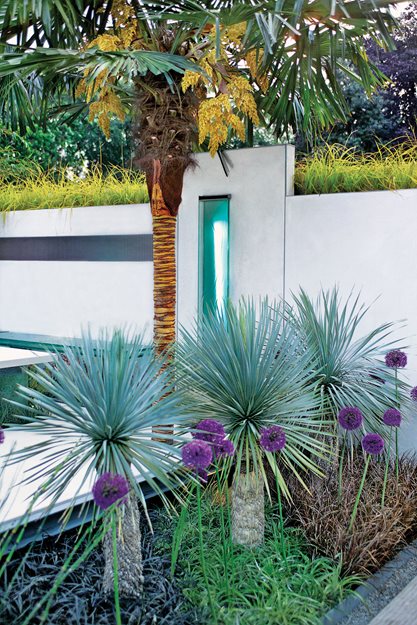 Then there are the aspects of palms that you might not think of until you add them to your garden and observe palm trees up close. Their open crowns cast dappled, animated shade and decorative shadows on walkways, walls and through windows into the house. Their oversize leaves make soothing sounds in the wind. Bright-green fronds make translucent silhouettes by day, and dramatically up-lit at night they perform a shadow play. With their delicate appeal also comes strength, a signature paradox of palms, and their extreme flexibility makes them one of the few plants able to stand up to a tropical storm. 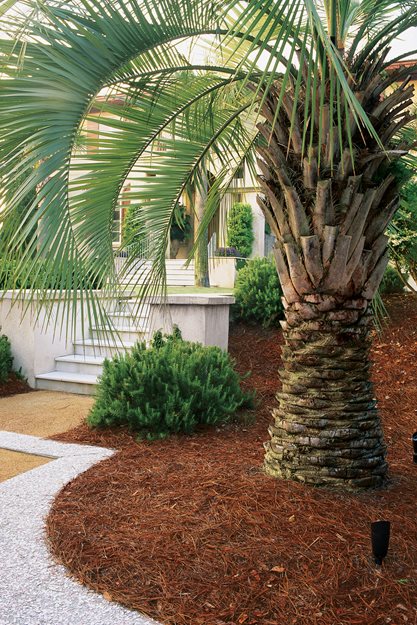 Versatile and hardy to 15 degrees Fahrenheit, a mature pindo palm brings compelling elegance to this residential garden. Even when this species is a young, trunkless plant, its arching, blue-green fronds work beautifully in a container or as a slow-growing foliage element. Photo by: Jerry Pavia.

Whether the solo player, the lead actor in a plant ensemble or a supporting character, the palm’s distinctive form holds its own. They excel as dramatic punctuation marks in the landscape, and a single fine specimen or multitrunk cluster creates a sculptural focal point. But some palm trees seem meant for allées. The central axis of Rio de Janeiro’s Botanical Garden and Palm Beach’s Royal Palm Way are distinguished by rows of royal palms, their concrete-white trunks creating a colonnade, their vibrant green leaves drawing the eye upward. The key is to use the same species, evenly spaced, or alternating with another species of tree or palm. Rows of palm-tree clusters can also be exuberant, as on Broadway in San Diego, where Senegal date palms (Phoenix reclinata) in the median add green rhythm to the drive through a concrete canyon.= Planted in groves, tall palms like the royal (Roystonea species), queen (Syagrus romanzoffiana), Mexican fan (Washingtonia robusta), palmetto (Sabal palmetto) and coconut (Cocos nucifera) palm create a comforting canopy without completely blocking the light, like an installation of parasols. Smaller species can play roles as hedges, shrubs or bamboo alternatives in shade (Rhapis excelsa, lady palm, and Chamaedorea costaricana, bamboo palm) or sun (Chamaerops humilis, Mediterranean fan palm), or as trunkless understory elements (Chamaedorea radicalis, Rhapidophyllum hystrix and Kerriodoxa elegans). 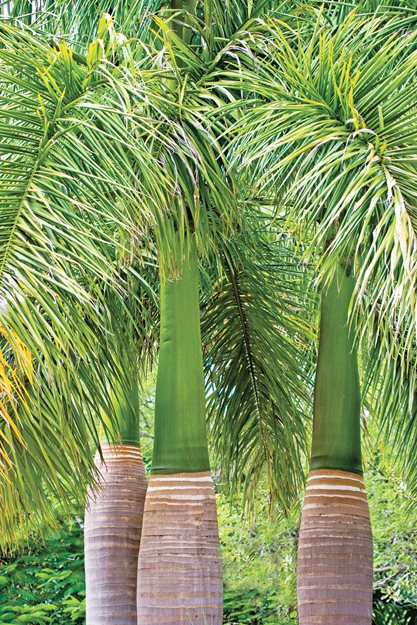 And just as palms are among the choicest containerized indoor plants, so too do they make marvelous container statements outdoors. Consider the bold, graphic impact of Mediterranean fan palms (Chamaerops humilis) and Canary Island date palms (Phoenix canariensis) in the weighty pots lining the streets of Rome, immune to winter cold and summer’s heat and tourists. Compelling even as a 1-gallon plant, the slow-growing, versatile Mediterranean fan palm will thrive for years in a small container in the home garden, in sun or light shade, as will the pygmy date palm (Phoenix roebelenii), a more water-loving miniature tree. 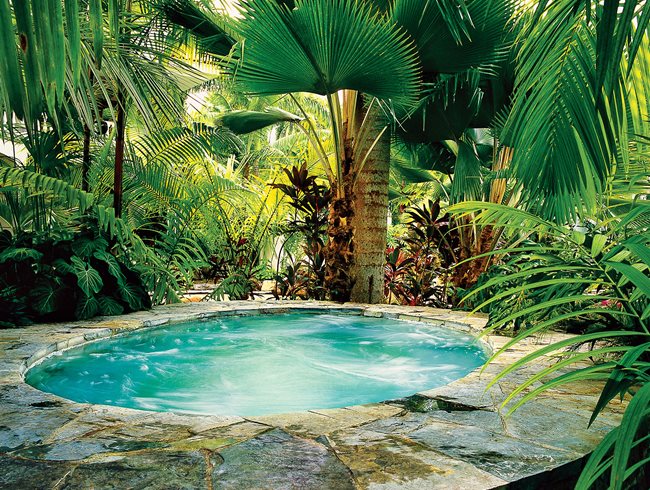 Using a rich mix of palm species and elemental stonework, Raymond Jungles created a rainforest atmosphere around a spa in Panama. Photo by: Richard Felber.

While palms are ideal companions to modernist and classical architecture, the rigid over-reliance on their regular forms can lead to neglecting the pleasures of naturalistic plantings, multi-age groves or mixing into beds with other plant types—succulents, shrubs, trees, bamboos. Just as avenue plantings can convey the silent seriousness of a Greek temple, palms planted informally carry on a dialogue with each other and the plants around them. 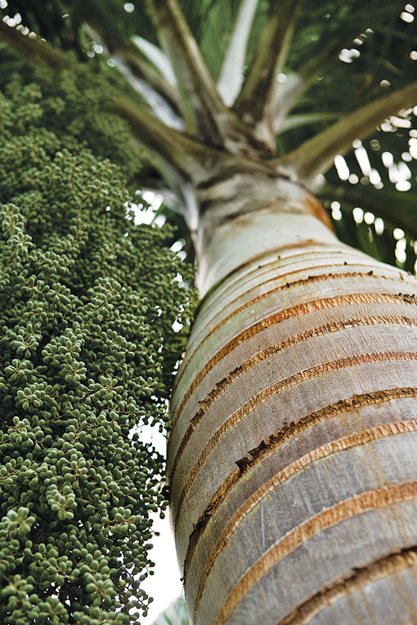 A skyward view of a Pseudophoenix species at Fairchild Tropical Botanical Garden in Coral Gables, Florida, captures fruit and swollen trunk. Palms attract interest whether viewed from below, lit at night, shadowed on the ground, silhouetted against sky or reflected in water. Photo by: Chelsea Stickel.

Though their symmetry and size make palms perfect elements in large estate gardens, many can also bring a touch of the tropics to smaller landscapes. Amenable to transplanting at maturity to a degree far surpassing other trees, palms offer instant gratification, even in narrow urban spaces, while posing a minimal threat to foundations and paving because of their fine roots. Their mesmerizing combination of vibrancy and geometry enables palms to excel in the sheer glass and stucco of Miami, the rainforest riot of Costa Rica, the Mediterranean stateliness of Rome, the austerity of desert oases and even the Pacific-rim mists of Vancouver. Wherever palms—from miniatures to 100-foot colossi—can be grown, garden designers are opening their senses to them. 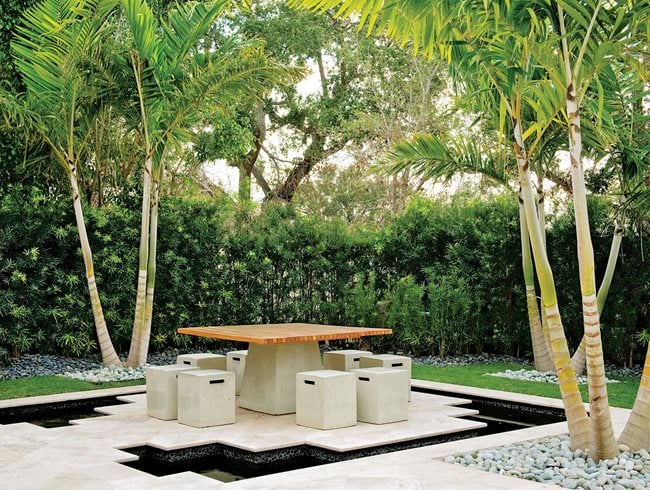 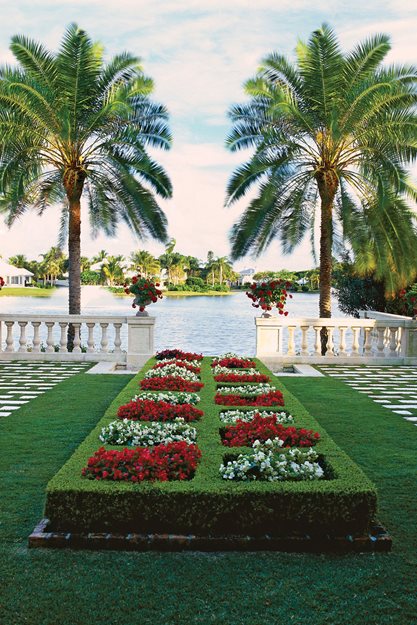 A pair of Phoenix palms plays their classic symmetrical role in this update of the Persian paradise garden designed by Sanchez & Maddux in Palm Beach Photo by: Chelsea Stickel.