From agaves to kalanchoe, discover the best succulents for your garden By Linda Hagen

If you are new to succulents, here’s a primer on the 15 most popular types to get you started. These easy-to-grow, drought-tolerant plants can add a dramatic flair to your water-wise garden and are a great choice for beginning gardeners. 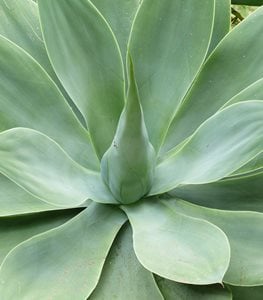 Agaves are available in a wide range of sizes, from smaller specimens that mature at 1-2 feet, perfect for containers, to larger specimens many feet tall and wide. Their fleshy and fibrous leaves grow in a rosette shape and are usually barbed along the edges and tipped with a sharp point, with the exception of Agave attenuata (shown). They come in shades of gray and green, some with hints of blue and red, as well as others that are variegated with white or yellow, such as Agave americana. Most agaves are sun-lovers, but some can survive temperatures as low as the 20s. These sculptural succulents add an impressive design element to your water-wise garden or patio container.

Read more about how to grow agave plants. 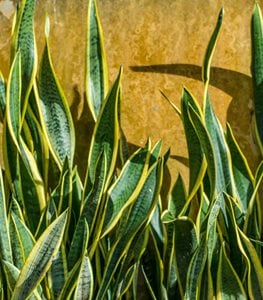 Commonly called mother-in-law’s tongue or snake plant, there are approximately 70 species of Sansevieria. These nearly indestructible plants are often grown indoors and thrive on warmth and bright light, but some also tolerate low light & humidity. The dense, stiff leaves of some types can reach up to 3’ tall. Leaves are dark green with grey-green cross banding (Sanseveiria harwoodii) with white or cream variegation on the leaf margins (Sansevieria trifasciata ‘Laurentii’), or have cylindrical stems (Sansevieria cylindrica). Sansevieria are well-known for their air-purifying qualities. 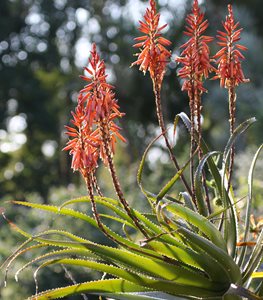 Aloe plants range in size from just a few inches to tree-varieties up to 20 feet tall. Their gel-filled leaves grow in a rosette pattern, some with marginal teeth, Aloe teeth are not as sharp as the terminal barbs of Agave. Aloes will bloom each year by shooting up tall flower stalks, usually in shades of bright orange, red, or yellow, most commonly mid-winter to summer. Aloes are frost-tender, making smaller, container-size varieties more suitable for moving indoors in colder climates. 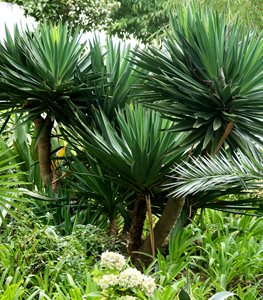 With several varieties available, there are yuccas suitable for almost any climate, some being cold hardy well below freezing. Their leaves are stiff and linear, ending in a spear-like spike. Yuccas are quite easy to grow, sometimes too easy, and may have a tendency to offset beyond the original solitary rosette. Species range from tall-stemmed trees topped by a cluster of spikey leaves to stemless varieties 1-2 feet tall and wide. Yucca elephantipes (shown) is a giant, spineless yucca that can be grown in the ground or containers.

See more about how to grow yucca plants. 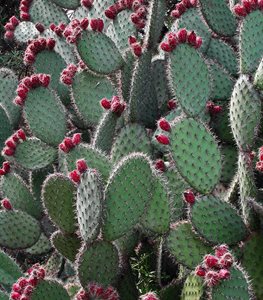 All cacti are considered succulents, and one of the most common is the prickly pear (Opuntia). It is characterized by its flat, fleshy pads that have large spines and smaller, hair-like prickles that easily detach, as experienced by anyone who has come in contact with one. Prickly pears are extremely drought tolerant and also produce showy flowers and edible fruit, making them a perfect dramatic accent for xeriscape planting. 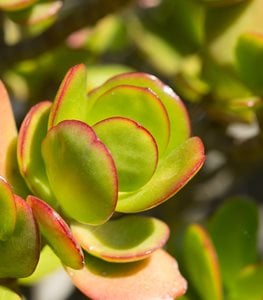 Crassula ovata, more commonly known as jade plant, has thick, shiny leaves in shades of green and grey, some with red or yellow edges. Jade is commonly grown as an indoor plant, but can also be grown outdoors in mild climates. Mature plants will bloom clusters of small pink or white, but will rarely bloom if grown indoors.

Learn more about how to grow jade plant. 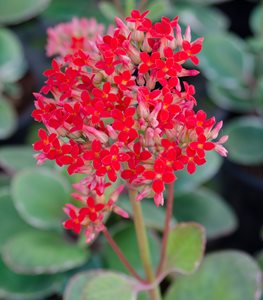 Kalanchoes are recognized as the most commercially sold succulent. Kalanchoe blossfeldiana (shown) can be readily found in supermarkets, home improvement centers and nurseries, being sold as a houseplant. However, it can also be grown outside in milder climates. Most grow no larger than a couple of feet tall and are well-suited for patio pots or indoor containers. They bloom with long-lasting bright flowers from fall to winter and their textured foliage adds to the show. 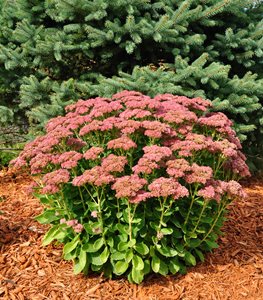 Sedum and Hylotelephium are commonly referred to as stonecrops, smaller varieties do well in sunny crevices in stone walls and in sandy areas. They have small, showy flowers that bloom in many colors, abundantly in some species. Some varieties are better suited to cooler weather, preferring milder summers and surviving temperatures below freezing, while others tolerate heat better than cold. 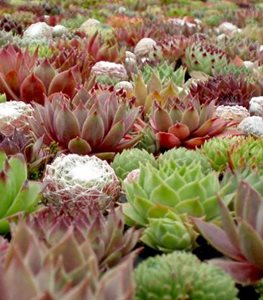 Often referred to as hen and chicks, there are over 3000 cultivars of Sempervivum. Like some varieties of Sedum, these also do well in colder climates and are not well-suited for hot, southwest summers. Although they resemble Echeveria, they are more compact and have thinner leaves. Sempervivum are easy to care for and will produce multiple offsets to form a thick mat of foliage. They also thrive in rock gardens or amongst stones or gravel.

Learn more about how to grow hens and chicks. 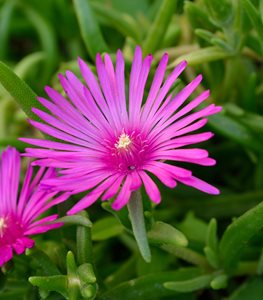 Delosperma cooperi (shown) is a hardy variety of ice plant native to South Africa. These spreading ground covers are drought and heat tolerant, and get their name from several varieties that produce calcium crystals on their leaves that resemble frost. Species and cultivars come in a multitude of colors and will provide a showy carpet of vibrant blooms throughout the summer. This ground cover only asks for well-drained soil and bright light. 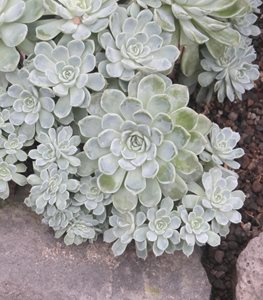 The many varieties, colors, shapes and sizes of Echeveria make it hard to pick a favorite. Most are rosettes and come in colors ranging from pastels to deeper shades of pink, blue, orange, green and even in combinations. Leaf textures can vary from smooth to bumpy, powdery, or fuzzy. They range in size from 1-2 inches to nearly a foot in diameter. They bloom on tall flower stalks and a common favorite is Echeveria elegans (shown). 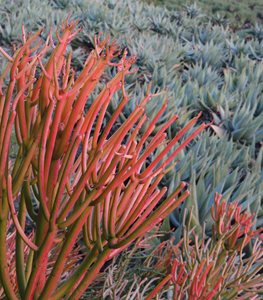 This huge genus contains over 2000 species (including poinsettias), with 500 of those being succulents. The common factor is a milky sap that can be irritating to the skin in some varieties and poisonous in others. Some species closely resemble cactus and store water just as efficiently. Some will bloom with tiny flowers. They vary greatly in size from 1-2 inches to trees of 30 feet. Euphorbia tirucalli ‘Sticks on Fire’ (red pencil tree) shown here is a common variety that can grow to 5 feet tall and wide. 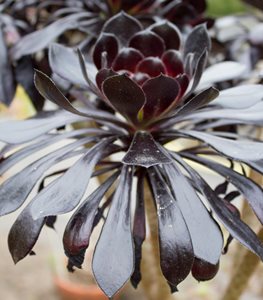 The symmetrical rosettes that form at the end of the branch-like stems bear resemblance to other succulents such as Echeveria and Sempervivum. The dark magenta-black rosettes of Aeonium arboreum ‘Zwartkop’(shown) are actually leaves. Flowers will bloom from the center of the rosette in clusters in late winter or spring. Yellow, green, red or variegated white leaves are also seen in Aeonium. 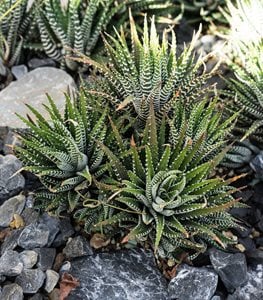 Haworthia’s small size makes it perfect for window boxes. They sunburn easily, so should be protected from direct bright light. They will multiply and tend to establish tight overlapping colonies. Bloom stalks will form and shoot up from the center of the plant, but can be removed if unappealing. Haworthia fasciata (shown) is a favorite for use in mixed succulent plantings. 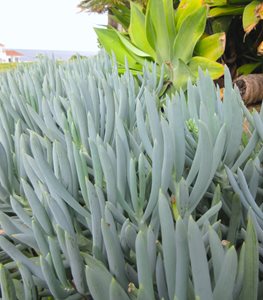 Senecio mandraliscae, commonly called blue chalksticks (shown), is a groundcover succulent that will form drifts of blue in your landscape. Most types of Senecio will tolerate some frost. There are over 1000 species, but only about 100 that are succulents. These succulent Senecio are drought and heat tolerant.