This Kalanchoe succulent, nicknamed "the mother-of-thousands" is as prolific as it is maternal By Anna Laurent 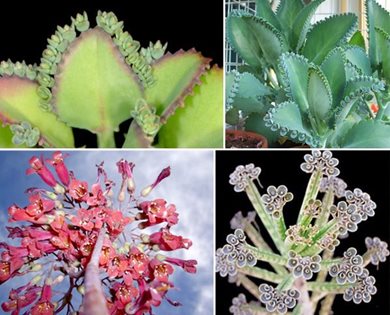 Kalanchoe daigremontianaPurchase this plant on Amazon.com

My mother laughed when she read the Kalanchoe daigremontiana's identification tag. "Mother of Thousands! You have my sympathies," she sighed and patted its plantlet-fringed leaf. Keeping a close eye on her developing progeny, the mother-of-thousands is as prolific as it is maternal—hundreds of tiny plants actually grow on the mother's arms. When released, each plantlet falls to the ground to take root on its own—now the next "mother" in the lineage, never too far from home.

The mother-of-thousands is a superlative nurturer by necessity; somewhere on the evolutionary timeline, the unique succulent lost the ability to produce viable seeds, and so the burden of reproduction fell to its leaves. As the plant matures, spoon-shaped spurs develop along the periphery of its leaves, each yielding a miniature clone of the mother. These adventitious plantlets grow larger and form roots, all the while clinging to the mother's leaves, which now hang heavy under the weight of so many young plants.

Native to southwestern Madagascar, the mother-of-thousands is also a popular succulent for the home, and thrives in warm, dry landscapes. It does not flower frequently, or reliably, but when it does, the blossoms are stunning. A chandelier inflorescence of small bell-shaped pink flowers hangs over the central stalk, which has grown taller for the occasion. The tubular blossoms also attract hummingbirds.

It should be noted that the mother-of-thousands does not extend the same kindnesses to the young of other species: all parts of the plant are poisonous, and can be fatal if ingested by small animals or infants.