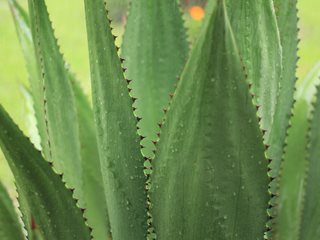 Agave plants offer an ideal solution for gardeners reconsidering their water-guzzling landscapes, while bringing the added benefits of drama and structure as well as texture and subtle color. Agaves grow best in the Southwest and Mediterranean climates, but are adaptable and can also be grown out of their zones in pots if given winter protection.

Generally agaves thrive in the warmer subtropical zones that experience seasonal dry periods (Zones 8 to 10). A few species native to the southwest United States and northern Mexico tolerate more extreme heat and cold; Agave parryi will tolerate minus 20 degrees F (Zone 5). The best region for growing the most types is the Mediterranean climate areas of California. However, many species will thrive in the desert Southwest. In cold or wet areas elsewhere, some species can be grown if kept dry and well above zero in the winter.

Agaves are sun worshippers, though light shade for a couple of hours is acceptable.

Agaves are very adaptable. Soils low in clay content are fine. Texture can be sandy or rocky. In areas with substantial rainfall, a well-drained soil is necessary.

Plant or transplant in spring and early fall, giving larger species plenty of room to attain maximum size. Make sure that no part of the leaf rosette is covered with soil, which can cause rotting.

Until established, water once or twice a week. Eventually, agaves prefer to dry out between each watering. Overwatering may encourage fungal root rot. In California, heavy winter rains can cause small, even medium-sized, agaves to rot.

Protect small plants from summer sunburn and soft-leaved species from sunburn and frost with shade cloth. 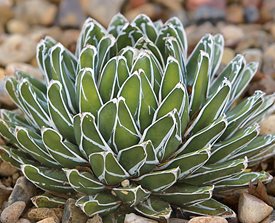 The Queen Victoria agave is less than two feet across, perfect for a pot, with striking leaves edged in white. Very slow growing it can take 40 years to bloom. Purchase an older plant to enjoy its mature years. Hardy to 10 degrees F. 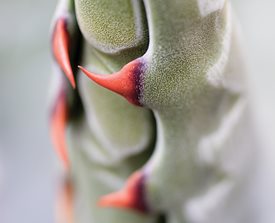 A hybrid between A. gentryi, which is compact with rounded leaves and reddish (very sharp) spines, and A. montana, which is variable but generally has longer, narrower leaves. The two species overlap habitats in Mexico and can naturally hybridize. Shown here is the artistic leaf imprinting at the shoot apex’s bud cone. 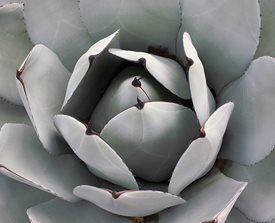 One of the nicest agaves for the landscape. Its striking artichoke-like, blue-gray rosettes and clumping habit earn it a prominent spot in the garden. Grows two to three feet tall and three to four feet across. If kept dry, it will tolerate 15 degrees F. 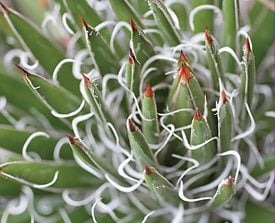 A dwarf agave best used in a container. If planted in the ground, it will form a clumping mound over three feet across. Noted for its wispy curled fibers that decorate the leaf margins. Hardy in Zones 9 to 10. 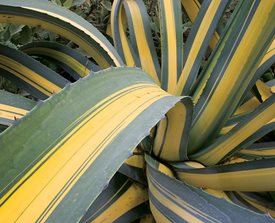 Since the 19th century, a popular garden plant in Southern California, with creamy golden stripes down the length of the foliage. Its thick guttered six- to eight-foot-long leaves make it a whopper of a specimen up to 12 feet across. Size can be greatly reduced if it’s kept in a container. As with many other variegated agaves, it needs protection from sun during the hottest part of the day, especially in desert areas. Hardy to Zone 8. 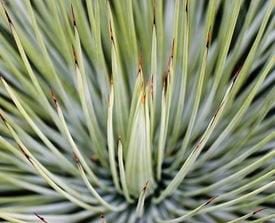 Some may prefer this as a container plant. Its short, stiff yucca-like leaves have sharp terminal spines that can provide some unpleasant surprises for the unwary gardener. The narrow foliage provides a great texture, contrasting with bolder foliaged plants, including other agaves. Grows to 18 inches wide. Hardy to 15 degrees F. 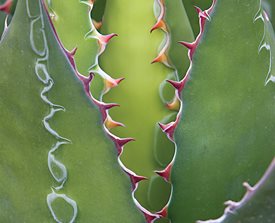 A solitary agave (it does not form offsets) recently discovered in Mexico, three to five feet tall and four to six feet wide. The chestnut brown marginal prickles contrasted against rich green leaves make it pleasing to view, especially in a location where there is backlighting. Hardy to 10 degrees F. 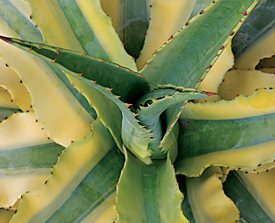 Possibly an aberrant form of the variegated A. americana. Also sold under the invalid and rather unwieldy name of A. americana ‘Marginata Aurea Monstrosa’. Planted in the ground, it will grow to two feet across and 18 inches tall, but will be somewhat smaller in a container. Very slow growing, so try to purchase a larger, older specimen. Hardy to 25 degrees F.

Is agave a cactus?

Agave is a type of succulent, commonly confused with cactus. Remember the rule that all cacti are succulents, but not all succulents are cacti. The main difference between agaves and cacti is the presence of leaves, cacti do not have them, while agaves do.

Used primarily for their startling leaf artistry, agaves also eventually flower, though blooming signals the end of the plant’s life cycle, when they depart in a blaze of glory with a tall spike or enormous, treelike branched stalk. After the towering spires bristling with tubular blossoms are finished, the mother plant dies off. But depending on the species, new pups start to form either before or after flowering, which can be removed and put into containers of their own.

How are agaves propagated?

Pups can be pulled free from the parent plant to make more of a good thing. In addition to the progeny that sprout from the roots, some agaves make plantlets on their flower stalk. Both pups and plantlets can be removed and planted in their own pots.

If you live in an area with sustained cold, bring your agaves indoors for the winter, or leave them inside year-round. Here are some tips: