Add Succulent Treasures to Your Garden

Add some variety to your garden with Sempervivum, also known as Hens and Chicks and Houseleeks 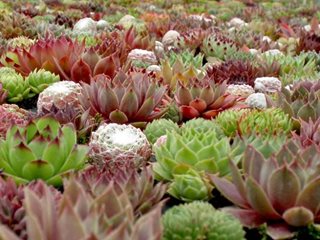 Sempervivum are considered “Old World Treasures” and are associated with mythology. During early centuries in Scandinavian countries, they were called “Thor’s Helper” and were believed to drive off demons and guard homes if planted on roofs. The Romans called them “Beard of Jupiter” and planted them on roofs to guard against lightning. This myth spread throughout Europe to Ireland where they were described as “a wee cabbage sat down, on my roof.”

In appearance Sempervivum have many different textures and forms: from velvety, wooly, satins, fringed, tufted, and spidery webs. Some are large and some grow a quarter inch in diameter and produce tight clumps which have a tendency to produce interesting mounds. There is a wide range in color from silver-blues to the darkest of purple, to delicate pinks. Most of the plants show their best color in the spring and again in the fall. There are also many forms, from rosettes, tight balls (rollers), artichoke look-a-likes, and some that have the appearance of stones.

The name “Sempervivum” translated means “Live-for-Ever” which makes a statement regarding the hardiness of the plants. All are cold hardy to Zone 5 (-10 to -20 degrees F) and drought tolerant.

Best planted in clusters, Sempervivum throw new offsets (chicks) each spring. Once a plant blooms, it dies, but the chicks carry on for future years, maturing and making their own offsets. Sempervivum may be grown in full sun where summers are cool (80–85 degrees) or along the coast. In areas with hot summers, afternoon shade is preferable. They are excellent container plants, needing only a small amount of soil, and also perform well in raised beds where they can be easily viewed.