A tiny backyard is transformed into a functional, family-friendly retreat By Anne Balogh

When you have a family of four, two small dogs, and a backyard the size of a postage stamp, you either move elsewhere or find a way to make the space work and accommodate the outdoor activities your family enjoys. The owners of this home in Piedmont, CA, chose to do the latter and transform their cramped, poorly designed patch of land into an outdoor living area spacious enough for everyone.

“We were tasked with doing the most with this small backyard and offering features for everyone in the family to appreciate,” says Michael McFadden landscape architect and founder of Planted Earth Inc., Berkeley, CA. “The design challenge was to expand an existing tile patio so the space could function as an outdoor living room. Designing a new entry gate and replacing the existing stairs from a public sidewalk to the elevated backyard—without consuming too much precious space—was a further piece of the puzzle.” 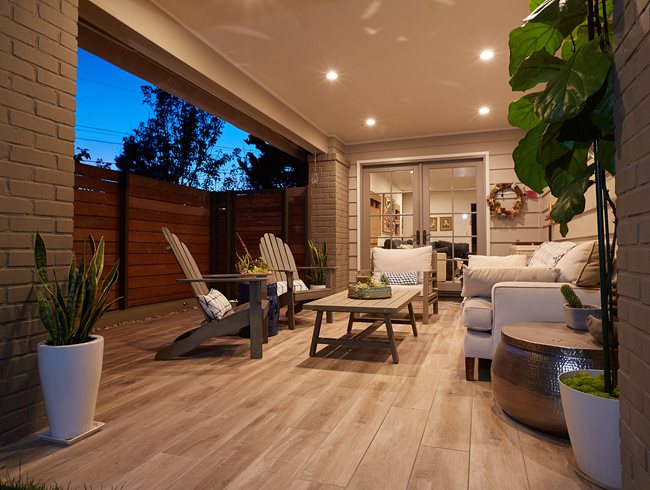 The covered patio was enlarged, raised, and resurfaced so it could serve as an extension of the indoor living space. Concealing it from view is a 6-foot-tall horizontal ipe wood fence. Photo by: Karl Seifert.

By removing the existing patio, enlarging the space, and resurfacing it with plank tile flooring, McFadden was able to create a furnished outdoor living room that serves as an extension of the indoor space. “The existing patio was too small, oddly designed, and didn't function as an outdoor living room like the client wanted. Renovating it to make a comfortable and enjoyable space was the heart of the design challenge for the whole project.”

The key to making it all work was to provide privacy and seclude the area from the nearby public sidewalk. This was done by installing a retaining wall and relocating the stairs and gate between the public sidewalk and backyard.

“To establish privacy, we constructed a 6-foot-tall horizontal board fence and gate, made from the tropical hardwood ipe. The board fence was attached to steel posts that were set in an existing retaining wall,” says McFadden. 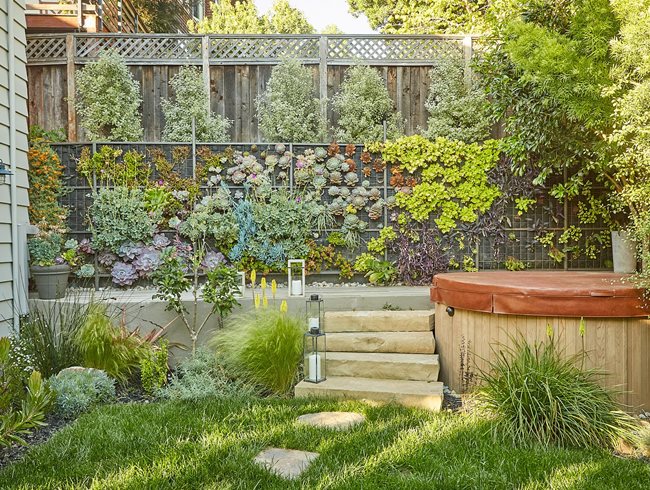 A view of the backyard during the day. The lawn is planted with deep-rooted fescue to minimize water requirements. Photo by: Karl Seifert.

The existing backyard included a patch of artificial turf integrated into a narrow, awkward masonry shelf that was part of a footing to support an unsightly retaining wall. By cladding the wall with a living layer of succulents and flowering perennials, resurfacing the narrow landing, and installing a spa and new stone-slab steps leading up to it, McFadden created two levels of functional outdoor space and a lovely vertical garden.

“Instead of simply replastering the ugly retaining wall, for the same cost we chose to install a vertical green wall. This living wall was welded and bolted onto the structure of the old retaining wall,” says McFadden. “Our project manager, Naosuke Nemoto, pointed out the green wall opportunity to the owner and I during a meeting. Everyone embraced the idea immediately and we never looked back." 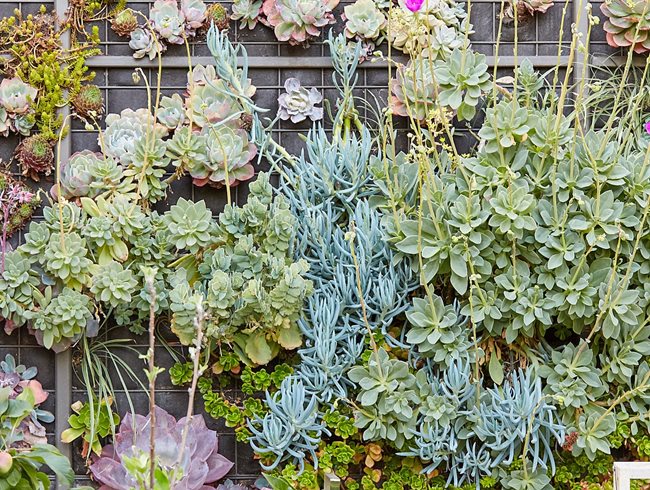 The living wall is filled with an artistic array of drought-tolerant plants, including echeveria, sedums, sempervivums, creeping liriope, golden parrot’s beak (Lotus Maculatus), and blue chalksticks (Senecio mandraliscae). Peeking up behind the succulents is the variegated foliage of Pittosporum tenuifolium 'Marjorie Channon'. This evergreen hedge was added to complete the vertical effect and further block the view of the fence above the existing retaining wall. Photo by: Karl Seifert. (See more: Vertical Gardening)

Planted Earth landscape designer Danica Zoran worked closely with the homeowner on the plant selections. A variety of drought-tolerant succulents and perennials were chosen for the wall to create a collage of colors and textures. Because of California’s dry climate, a drip irrigation system was woven through the wall to conserve water. The yard also features a patch of deep-rooted fescue for the dogs, an apple tree, and some carefully selected drought-tolerant shrubs and perennials. 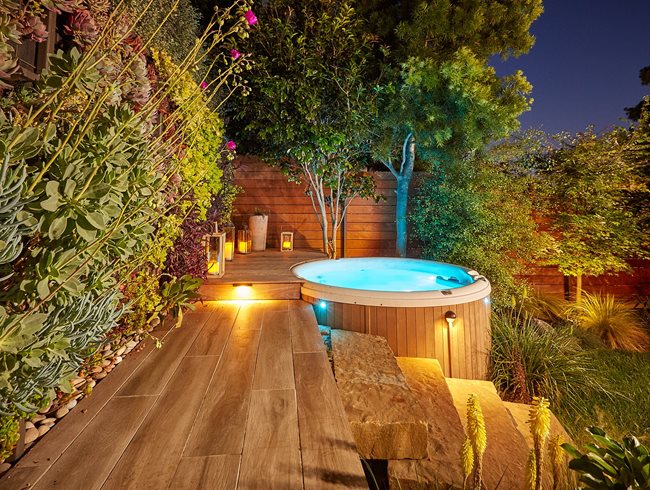 The backyard was transformed by installing a spa, custom lighting, and a lush vertical garden that clads an existing retaining wall. Resurfacing the narrow landing and adding a stairway made of 6-inch-thick sandstone slabs created two levels of outdoor living space. Photo by: Karl Seifert.

Another important aspect of this makeover was to make the backyard a place that could be enjoyed as much at night as it could by day. This was accomplished through the installation of smart landscape lighting system, under the direction of Planted Earth designer Robin Slovak, that illuminates the hot tub, living wall, stairway, and other backyard features. “Our approach is to complete the hardscaping, planting, etc., and do the lighting last,” says McFadden. “Once everything else is installed, we choose a night to experiment, playing with lighting placement, angles, fixtures, and brightness levels so we can make adjustments until the lighting has the effect desired by our client.”

The entire backyard renovation took 2-1/2 months to complete, but by the end, the space felt much larger than before since it utilizes every square inch. “The owners were very satisfied with the variety of uses we had managed to fit into an otherwise small area,” says McFadden.