The story behind Mexico's ethnobotanical garden in Oaxaca, a landscape of unexpected shapes and colors. By Jeff Spurrier

"I am not a gardener.” Francisco Toledo is sitting in the courtyard of the graphic art institute he founded in downtown Oaxaca City, Mexico, sipping on a glass of agua de jamaica. His fingers are paint-smudged, and he moves stiffly from a sore back. Toledo, 71, is one of Mexico’s best-known living artists; his paintings, sculptures, and textiles are in galleries and museums around the world. At home in Mexico, he is identified with a fierce and outspoken defense of the indigenous arts and culture of the southern state of Oaxaca. He also, as it turns out, helped to create one of the world’s most original public gardens. 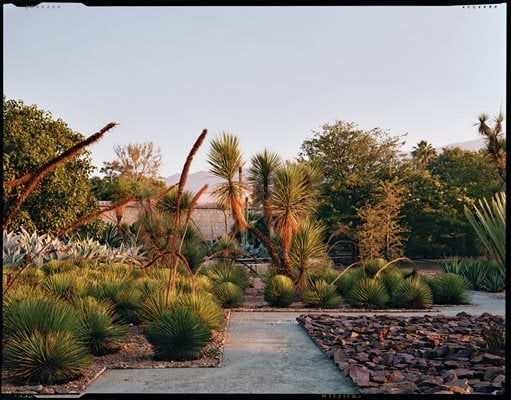 The zigzag step-fret inspiration continues throughout the garden, ecological requirements of plants determined a few monochromatic rock beds, and repetitive plantings of agave are included to emphasize its cultural and biogeographic significance. Photo by: Dana Gallagher.
SEE MORE PHOTOS OF THIS GARDEN

“The professionals are the people who live in the country,” he says. “The campesinos and workers—I don’t have the patience.”

Nearly 20 years ago, the Mexican military moved out of a sixteenth-century Santo Domingo monastery complex it had used as a base for more than 120 years. Mexico’s president gave the exit order after being lobbied by Toledo and other leading artists and intellectuals belonging to Pro-Oax, an advocacy group urging the promotion and protection of art, culture, and the natural environment in Oaxaca. Soon, a great clamor began: the state government wanted the 5-acre parcel in the heart of downtown Oaxaca City to create a hotel, convention center, and parking facility. A restoration team brought in by the National Institute of Anthropology and History wanted to establish a European garden in the seventeenth-century baroque style. Some of Toledo’s fellow artists wanted to use the grounds for workshops and exhibition space.

In 1993, when Toledo knew the army would be leaving, he asked Alejandro de Ávila B., who had family roots in Oaxaca and training in anthropology, biology, and linguistics, what he and other advocates would propose. De Ávila suggested making the space into a botanic garden—or, more precisely, an ethnobotanic garden, one that would “show the interaction of plants and people.” De Ávila, who was just about to leave Oaxaca to begin his doctoral studies at University of California, Berkeley, quickly turned in a concept paper defining the garden’s mission and the various educational functions it could fulfill.

Oaxaca’s indigenous peoples are known for their textiles, ceramics, cuisine, and complex use of plants. The earliest evidence of plant domestication of squash and corn in the Americas was found in Oaxaca. To this day, wild plants are used throughout the region for food, crafts, and medicine. Because of the area’s unique botanic diversity and history, Toledo, de Ávila, and other Pro-Oax members got the endorsement of the federal government, and in 1994 the state created a trust enabling the Jardín Etnobotánico de Oaxaca to be formed. The plan was to have the garden tell the area’s history by arranging plants by ecological and cultural themes. There would be a section for domesticated plants, and all the plants (with the exception of few species) would be wild natives. De Ávila, who became founding director, enlisted local gardeners and healers to help maintain and provide specimens for the garden. The ground was prepared, and then the hard part began. “We brought in as large plants as we could manage, but nobody had experience with them,” says de Ávila. Fertilizing and disease and pest control were developed through case-by-case protocols. 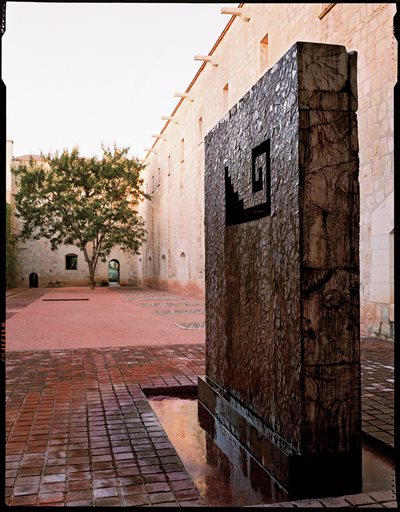 De Ávila was joined by the artist Luis Zárate, who was instrumental in design and hardscape touches: iron borders, walkways, bridges, and handrails. A snaking pathway of naturally green-hued soil was inspired by a pre-Columbian step-fret zigzag design, a motif that is echoed throughout the garden. It surfaces most dramatically in a massive Toledo-designed fountain that seeps water dyed blood-red from ground-up cochineal over slabs of Montezuma cypress, La Sangre de Mitla (the blood of Mitla).

The title refers to the archeological site of Mitla, 25 miles from Oaxaca. It was a religious capital when the Spanish arrived in the 1500s. In a rock shelter named Guilá Naquitz, archaeologists found 10,000-year-old squash seeds, the first evidence of gardening in the New World. To highlight this history, one of the Jardín’s raised beds is aligned to point to Guilá Naquitz and planted with squash. 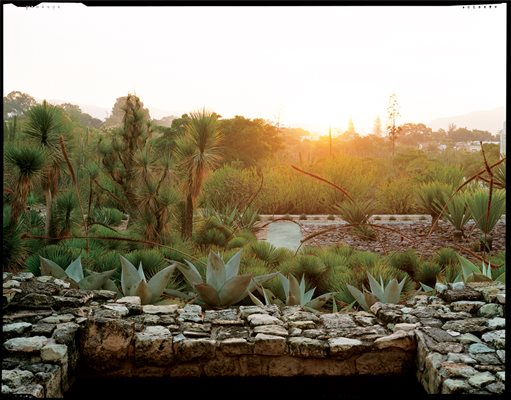 Agave and beaucarnea surround the edge of a bathing pool. Photo by: Dana Gallagher.
SEE MORE PHOTOS OF THIS GARDEN

During the excavation and building of the Jardín Etnobotánico, archaeologists uncovered 400-year-old structures, in some cases dating back to the construction of Santo Domingo. De Ávila incorporated these discoveries, selecting plants to echo this (comparatively) recent past. A bathing-washing pit once used by Dominican novices is now shaded by soapberry, agave, and other plants used to make soap; near the monastery’s library, along the western wall enclosing the garden, de Ávila planted a fig tree—the particular species was a source for the finest indigenous paper in pre-Columbian times.

Twin rows of columnar organ pipe cactus, the garden’s most visually striking feature, create a tight fence to protect specific opuntia prickly pear cactus, used in the production of cochineal. This highly prized maroon dye was exported by the Spanish and used in Chinese silks, Persian carpets, and paintings by El Greco, van Gogh, and Rembrandt. 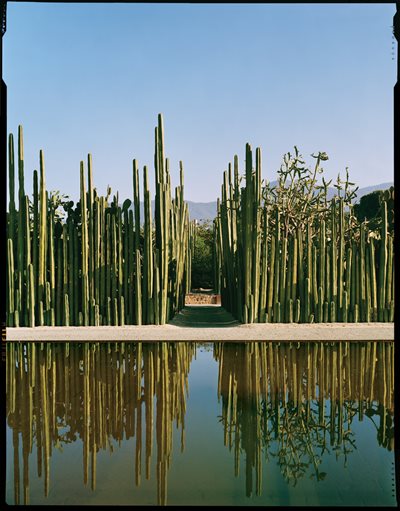 Marginatocereus marginatus (organ pipe cactus), planted here next to the mirror pool and around cochineal-covered nopal cactus, are traditionally used in Mexico as borders, corrals, and fences to keep out foraging livestock or strangers. Photo by: Dana Gallagher.
SEE MORE PHOTOS OF THIS GARDEN

Overhead in the northeast section of the garden, devoted to tropical forests of Oaxaca, is a canopy of balsa and ceiba. There are also graceful Parkinsonia aculeata and huaje, the tree that gives the state its name. The east half of the garden is for plants from the wet regions—cacao, vanilla, achiote—while the west is for the many dry land varieties—human-size cacti, fat-leaved agaves.

It may sound ordered and academic but a stroll through the garden is anything but dull. It’s a landscape of unexpected shapes and colors, thorny branches, and velvety petals. Bulbous ponytail palms lead to a cycad section where golden football-size cones bulge from the centers of plants. While late spring is the most colorful time, there are flowers year-round: the creamy blossoms of flor de mayo (Plumeria rubra); tiny vermilion wild hibiscus; native bell-flowered dahlia, thick with palm-size white blossoms tinged with a purple core. Although extensive databases are kept on the collection, there is no public master list of the more than 1,000 varieties. Bio-pirates have raided the garden, stealing rare cacti and cutting samples for cell tissue propagation. Now visitors are only allowed in on guided tours. The rarest plants, some started from seed, are kept locked in a greenhouse.

De Ávila came to Oaxaca as a child with his father in the late 1960s and has strong memories of the monastery. “When Francisco said that the soldiers would be leaving, we all saw the great opportunity,” he says. “It was the chance for proposing a dream.”

Traveling to OaxacaOaxaca City, Mexico, is a 45-minute plane ride southeast from Mexico City or six hours on a toll road by car.

Jeff Spurrier lives in Los Angeles and Mexico. His most recent story for GARDEN DESIGN was "A Waterwise Cactus Garden," November/December 2011, which was about a Los Angeles garden inspired by Jardín Etnobotánico.