Even when it's cool in Los Angeles, every few days Lari Pittman gets up early to turn on the sprinklers in Parque Oaxaca, the three-quarter-acre private garden he and his partner Roy Dowell have been building for nearly a dozen years. It’s mostly cacti and succulents, olive and pepper trees—drought-tolerant plants that can endure the heat without watering. 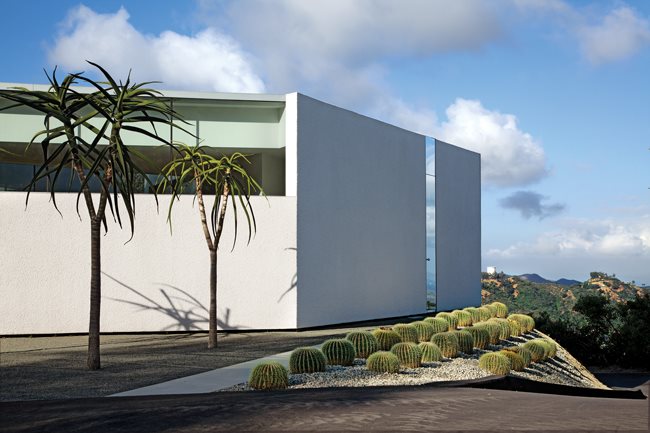 “I think of it as community service,” Pittman says, smiling and watching the hummingbirds and blue jays flit through the spray. The thick coastal scrub in the steep arroyo just beyond the garden is full of thirsty birds and animals—deer, bobcat, quail, fox, even bears. Occasionally he encounters a 4-foot-long green-striped garden snake during his watering chores. Rather than panic, as he might once have done, Pittman says hello.

Pittman and Dowell have been pillars in the modern art world for 30 years, exhibiting their work in galleries and museums around the globe. A couple since the mid-70s, their artistic styles are in many ways polar opposites. Pittman’s large canvases are often a chaos of images and messages frozen in a pleasing clarity, a humorous tumble down Alice’s rabbit hole. By contrast, Dowell’s collages are abstract, forms and colors that speak to the emotions wordlessly, like free-form jazz.

Their garden high in the Verdugo Hills is a collaboration of both sensibilities: playful, dramatic, perfectly staged, and expertly balanced. It’s impossible to separate individual influences on this private botanical canvas. Years before Dowell and Pittman met at the California Institute of the Arts in the ’70s, they independently collected cacti and succulents. Now they have let loose the design and color possibilities of these plants in a carefully crafted frame. There are giants and pygmies, the spineless paddle cactus and the fearsome fish hook. The scene is softened by fleshy agave, thick rosemary, and the fronds of palo verde and California pepper trees overhead. The garden is anchored around an open-air pavilion that serves as an outdoor kitchen and living room. 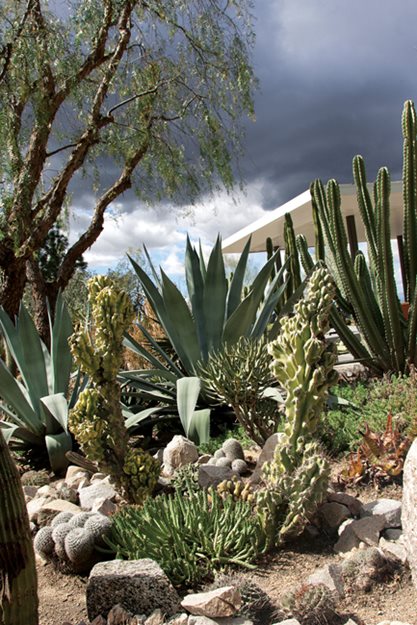 Among the garden’s many succulents and cacti are Cereus peruvianus ‘Monstrosus’, Agave americana, and C. peruvianus. Photo by: Ann Summa.

In 1998, when the couple heard about a 6-acre parcel for sale in the foothills, they jumped at the chance to get such a large chunk of land just minutes from downtown Los Angeles. The property had been an unfinished development project of iconic Modernist architect Richard Neutra and included a 1953 wood-and-glass building with views all the way to the ocean. After living there for a few years, the couple commissioned local architect Michael Maltzan to build an additional home on the property, where they now reside. Bright white and modernistic, it sits below the Neutra house (which now hosts guests), closer to the garden.

Soon after the two bought the property, they had the garden space leveled and cleared with a tractor. From this bare canvas they began to lay out the basic structure in the form of parterres, squares, and rectangles within an irregular trapezoidal space. Working with their longtime gardener, Jose Amaya, they used a 200-foot stretch of rope and stakes, marking the lines with granite boulders collected from the land.

“It was like Haussmann redoing central Paris,” says Pittman, referencing the urban planning overseen by Baron Georges-Eugene Haussmann 150 years ago, establishing the parks and boulevards of modern Paris. “We knew it was big and we couldn’t simply start putting in petunias here and there.”

The first plantings were dozens of fast-growing Schinus molle (Californian pepper trees) in 15-gallon pots, selected for their architectural beauty and the shade cast by their feathery leaves. The trees, native to Peru, can grow 50 feet tall. Twin gravel pathways were laid, named Reforma and Insurgentes after the main boulevards in Mexico City. Reforma forms the spine, starting at the western edge within a 12-tree olive grove. It runs straight as an arrow to the back of the slope where it is bordered by manicured hedges of rosemary. A small teahouse was installed early on at the steep corner of the arroyo’s walls. “We wanted a place to sit and watch things grow,” says Dowell.

Once the boulevards were in, section by section, they started filling in the parterres, and the composition began to take shape: hundreds of golden barrel cactus; blue-gray tequila agave; squat ball-shaped Euphorbia obesa; candelabra-like prickly pear opuntia with their broad flat paddles, some green and others pink (the Santa Rita variety); blue-green Cereus peruvianus ‘Monstrosus’, tall and columnar, its ribs winding in a twisting pattern. The majority came from growers Worldwide Exotics in nearby Sylmar.

“We’re not connoisseurs,” Pittman says. “It’s not about placing the plant in a context in this idea of naturalism. Naturalism itself is a form of simulation. The idea of multiple [plantings] is a form of order. The core logic of the garden is repetition.” 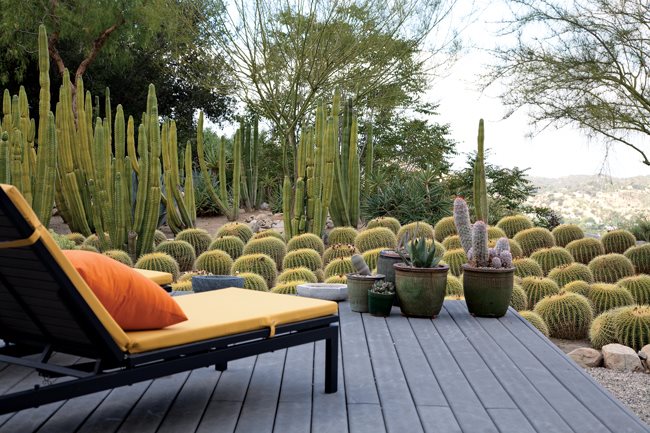 When putting in their plants, Roy Dowell and Lari Pittman eschewed traditional landscaping rules in favor of an artistic vision ruled by mathematical symmetry and repetition. Photo by: Ann Summa.

Learn more about different garden styles, plus get design inspiration and timely plant information in our weekly newsletter!

“When you have a lot of one plant together, like the barrels or the aloes, you see what they do, how they grow and behave in certain environments,” adds Dowell.

The driving force was aesthetics, on constructing views and private moments that capture the eye and challenge the expected perspectives. They laid out the golden barrels using paper plates as markers. Each is precisely equidistant from the other, no matter the viewing angle. With each step, the perspective changes yet impossibly remains the same.

Come summer, the larger specimens, like the Pachycereus pringlei, dominate the eye, imposing and statuesque. The bigger cactus, like the pepper trees, are pruned. The fast-growing paddle cactus, opuntias, are harvested for propagation elsewhere, most recently along the long driveway that winds up to the house from the street below. And in winter, the garden sleeps.

While any visitor can appreciate the blend of viewpoints, the names of the garden’s sections stem from a more private language, a whimsical logic that makes sense only to the two artists. There’s Sicily, predominantly olives but also thick with protea ‘Pink Ice’. To the right is Tribeca, named for its triangular shape, followed by East Village, referencing another New York neighborhood. San Miguel de Allende is next, a reminder of the couple’s second home in central Mexico. Provence is in the back where the long coastal rosemary borders flank Refoma, evoking a snapshot of a European garden path. And down front is Oaxaca, the central core next to the pavilion, named in honor of the garden’s inspiration, the Jardin Etnobotanico in Oaxaca City, Mexico. Built on the grounds of an old monastery by artist Francisco Toledo, the Jardin is a political statement about the importance of the Zapotec, Mixtec, and 14 other indigenous tribes of Oaxaca.

Their garden also contains a political message, says Pittman. He and Dowell are successful and well-educated but live in a world that can be hostile to their lifestyle. “All gay people, young and old, tacitly and with a keen sense of personal survival, understand that ‘public space’ is ‘heterosexual space’ and that ‘private space’ is our best bet,” he says. “Private space, including gardens, can be modified, articulated, polemicized, and decorated.”

At one point, when the cactus were going in, the couple began questioning the wisdom of the project, worrying that it was too much, that it was becoming a folly. But the uncertainity passed as they stepped back and considered the ephemeral nature of their project as a whole. “The garden is bigger than us and more significant,” Pittman says, smiling. “And the chaparral is here naturally,” Dowell adds. “Eventually, it will come back and take over. Some of the cactus will die but some are still going to live and take off.”

Jeff Spurrier writes regularly about gardens in Los Angeles. This is his first piece for GARDEN DESIGN.