How to Care for Poinsettias

Helpful hints and tips on how to keep a poinsettia alive, plus 9 unique and colorful varieties. By Tovah Martin 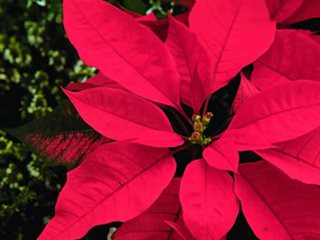 Poinsettias have become as entwined with our Christmastime traditions as carols and mistletoe. And it’s no wonder. There’s something magical about poinsettias. Sparked by shortening days, they burst forth with dazzling color just as the world outside turns gray and cold. Right on cue, tiny topknots of flowers jut from colorful yellow pockets (called cyathia) while the bracts—actually modified leaves—take on colors that sing to you from across the room.

Temperature and humidity: The ideal temperature for poinsettias is between 65 and 70 degrees. Avoid drastic temperature drops as this can cause leaves to wilt. Poinsettias are tropical natives and appreciate daily misting.

Light: When you purchase a poinsettia for the holidays, it’s primed and ready to perform and will keep on looking good for several weeks no matter where it’s displayed. To make your poinsettia last even longer, give it as much natural light as you can in midwinter, except in hot south-facing windows. Proper light, water, and warmth will help plants resist pests.

Water: Overwatering is a common killer. Remove any foil around the container that might inhibit drainage. Generally, watering once or twice a week will suffice if you moisten the soil thoroughly. Avoid wetting the foliage.

Fertilizer: Since poinsettias are blooming but not growing when purchased for the holidays, fertilizer isn’t necessary.

Are poinsettias poisonous? All parts of the poinsettia plant can cause mouth and stomach irritation if ingested, so keep the plants away from children and pets. The latex in poinsettias can cause a skin reaction in some people—play it safe and wear gloves when pruning or repotting. (For more, see "Holiday Plants with Toxic Misconceptions" from the National Library of Medicine.)

Can poinsettias be left out in the cold? Poinsettias can't handle frost and can be damaged or killed if temperatures go below 50 degrees, even for a limited time. That means getting a poinsettia home during the holidays can be dicey if you live in colder zones. Avoid leaving them in an unheated car, and protect it with a light covering when transporting it from store to car or car to home.

There are over 100 varieties of poinsettias, blooming in shades of red, pink, white, yellow, purple, and multicolored. Some of the more common varieties are:

Poinsettias have come a long way from their Mexico-native species, Euphorbia pulcherrima. Decades ago, poinsettias (named for the nineteenth-century ambassador to Mexico Joel Poinsett) were bred to have broader and brighter leaves. But that was only the beginning.

Now there are many more forms to seduce us, with bracts embellished by streaks, marbling, zigzags, speckles, and creamy hems; others with dramatically curled bracts; and still others that impress with their size, from huge specimens to itty-bitty pocket-size ones. And then there are the colors: deep crimson, flaming orange, peach, and many other hues. There’s nothing blah-humbug about poinsettias these days—they’ve entered a new age. Here are a few of the more unique varieties: 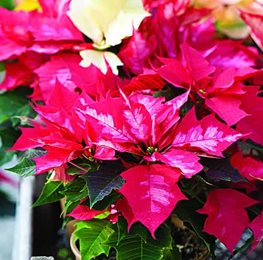 Marbling is all the rage in poinsettias. On this version from Ecke Ranch, lightning streaks of white emblazon the heart of red, holly leaf-shaped bracts. “What is cool,” says Jack Williams of Ecke, “is that ‘Ice Punch’ looks like frost has landed on the bracts.” And this poinsettia keeps getting better; week to week the central streak is joined by more white. 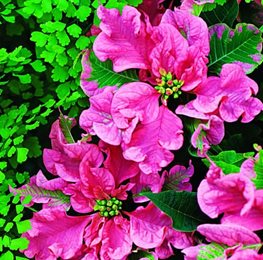 Who would have thought we’d be describing poinsettia bracts as wavy, frilly, or frothy? All are apt descriptors for the salmon-pink bracts of this cultivar, from Syngenta Flowers. As with its sister ‘Carousel Dark Red’, this poinsettia begins showing color in late November. Given their curliness, the bracts are a tad smaller than your average wide-winged poinsettia. But the Carousel types branch beautifully to form a broad, strong plant that can be transported easily from the garden center without fear of damage. 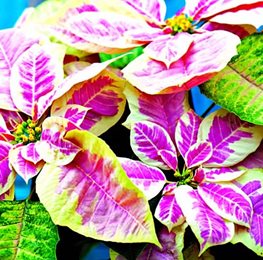 One of the most recent bombshells to land on the poinsettia market and the latest example of the marble trend is ‘Winter Blush’, introduced two years ago. This Ecke variety was chosen for both its patterned foliage (peach and yellow twilight colors dance around the veins) and for the pronounced contrast between the pink centers and the cream etching on the margins of its bracts. Bring it to friends and family as a holiday gift without fear—the strong stems withstand breakage. It’s also prone to linger long in average home conditions. 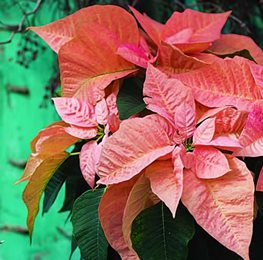 Although red is still king for poinsettias, holiday revelers are also excited by other hues, especially around Thanksgiving. In fact, 20 to 30 percent of poinsettias sold throughout the early holiday season sport alternative shades rather than the traditional red. Syngenta Flowers is the mastermind behind this luminous coral colored version. Given the season, cinnamon seemed like the perfect name. ‘Cinnamon Star’ boasts a rounded shape with expansive, almost winged bracts, and the younger central bracts begin with a darker sizzle before fading paler with the countdown to the winter holidays. 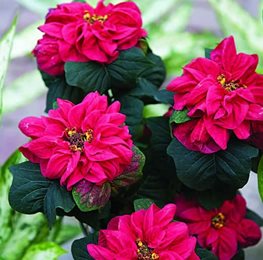 No less than 30 years in the making, this novelty started the “nontraditional” streak at Ecke. For poinsettia breeders, the holy grail has been a flat-bracted, big red poinsettia. So it came as a welcome shock 14 years ago when a funky little version with a pageboy hairdo was the talk of the trials. Four years ago, the Early Series hit the scene and, quoting Jack Williams from Ecke, “something good got better.” Not only has ‘Winter Rose Early Red’ revolutionized the holiday container- plant market, it also made a splash with florists looking for a new spin on holiday décor. 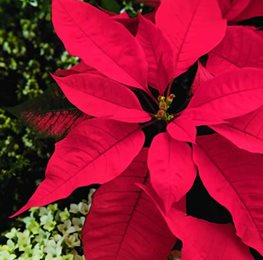 Originally, orange poinsettias were only imagined and wished for. Early attempts were actually just a yellowish shade of red rather than their own spin on the spectrum. All that changed with the chance discovery of an orangecolored seedling at Ecke Ranch. The bracts of ‘Orange Spice’ are long, sleek, and graceful, highlighted against dark foliage. But the biggest news is the color. A true, burning sunset orange like never before, it can even be used for Halloween decoration. Better yet, it holds for Thanksgiving and is still going strong at Christmas. 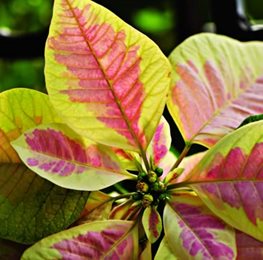 The earliest marbled poinsettias, pioneered in the 1970s, were almost all based on red. Now other colors have joined the party, notably Syngenta Flowers’ ‘Mars Marble’, with its soft, delicate pink, and equally demure milky cream colors on open-faced, smooth-edged bracts. This poinsettia starts to show color early, and the plant maintains a sturdy, upright posture. 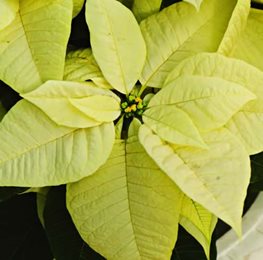 Pink was the first non-red poinsettia color to become popular, in the late 1960s, but white was not far behind; the first white poinsettias were introduced in 1970. Nearly 30 years later, Syngenta Flowers came out with ‘Whitestar’, with its huge, smooth, flat bracts flaring out like doves from the central topknot of flowers. ‘Whitestar’ has a rounded habit, is generously branched, and will show color in time for Thanksgiving. 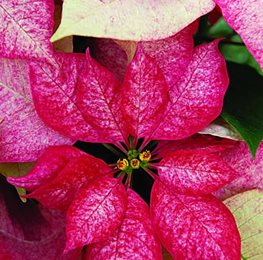 “Jingling” is the term breeders use to denote white speckling on poinsettia bracts. ‘Premium Picasso’, by the German plant breeder Dümmen, delivers an especially diffuse, seemingly airbrushed look. Against a pinkish-white background, cheery cherry-red flecks spangle the bracts immediately encircling the yellow and red central cyathia, which are the plant’s true flowers. Meanwhile, the outer bracts range from pure white to palest pink. The effect is a two-toned fantasia.