Every December has its hard-to-find treasure—a toy or game that captures the zeitgeist and flies off the shelves. In the past several years, one holiday symbol has become increasingly scarce: Frankincense, the original Christmas gift, the one that preceded them all. The aromatic resin became embedded in Christmas tradition when, according to the apostle Matthew, the Biblical Magi brought gifts of frankincense, myrrh, and gold to a Bethlehem nativity. Once abundant, frankincense is now threatened with near-extinction, as the trees that secrete the ancient resin have joined the international Red List of Threatened Species. In the holiday tradition, however, there is hope. Recently, botanists may have discovered the trick to sustainable harvesting, and increasing the tree's numbers.

Boswellia is a genus of 19 trees that grow primarily in the Arabian Peninsula, East Africa, and India. Frankincense is derived from four species, including Boswellia sacra, the source of a particularly fine frankincense, and believed to be the tree with Biblical notoriety. Frankincense is harvested by incising the tree trunks and collecting the residue (in this case, it emerges milky white), much like when harvesting maple syrup. The excreted resin hardens and forms so-called "tears." These tears are the essence of frankincense and have been lauded by different cultures for thousands of years. The ancient Egyptians believed that frankincense tears were the sweat of gods condensing on earth. When the mythical Phoenix bird rose from the ashes, it was said to have built a nest from Boswellia twigs and fed on frankincense tears. 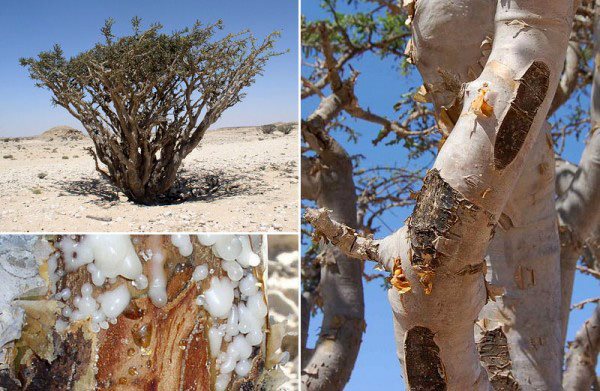 Despite its long history as a sacred plant, Boswellia trees today are looking at a grim future. According to a study published in the Journal of Applied Ecology, the trees are threatened by various pressures that may reduce their numbers by 90 percent in the next few decades. Young saplings are not surviving, trees are seeding less frequently and with decreased viability. Over-harvesting is a factor, but so are predators and increased fires.

In 2012, hope was found in a paper in the Annals of Botany. By mapping the tree's anatomy, botanists from the Netherlands and Ethiopia discovered a new approach to tapping the trees, one that will yield more resin with less harm to the tree. Motuma Tolera, an author of the study, explains: "Tapping the tree creates wounds in the stem that take resources to be healed, and more wounds create more opportunities for insects to attack the tree. It's not a surprise that some trees die." When he and his colleagues discovered an intricate network of canals in the inner bark, they saw "an option to reduce the number of cuts, and reduce the damage to the trees."

Tolera says, "Our results suggest that tapping can become more efficient. A cut that goes deeper, earlier in the tapping cycle, may drain the resin more effectively. This opens new ways for a more sustainable frankincense production system."

While botanists study the tree in Africa, horticulturalists in the United States can begin their own frankincense research. A New York Times article profiles an Arizona-based Boswellia cultivator who managed to grow all 19 species of the genus.

Editor's Note: This article was authored in 2011.