Modern Plants for a Bold and Beautiful Garden

Statuesque and carefree, plants used in the midcentury garden are more stylish than ever By the Editors

The design trend of choosing plants for their structural and sculptural qualities rather than decorative aesthetic evolved shortly after WWII. Some of those plants are still used today and others have been reinvented. Here are 13 plants that work well in modern-style gardens. 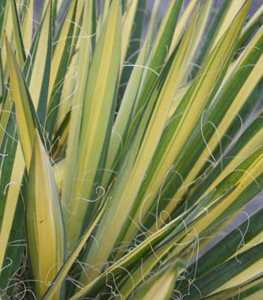 Mod Appeal: Yucca’s stiffly upright crown of evergreen swordlike foliage creates a living sculpture. Though perfect for a drought-tolerant garden with a southwestern feel, especially when combined with cacti and succulents, many types are hardy as far north as Zone 4.

Types with cream or yellow centers, (like ‘Color Guard') or edges (like ‘Bright Edge’) really glow in a sun-drenched garden; ‘Starburst’ has cream stripes that take on a pink tinge in cool weather. Banana Split® is tender but glorious in a simple container.

Learn more about how to grow yucca plants. 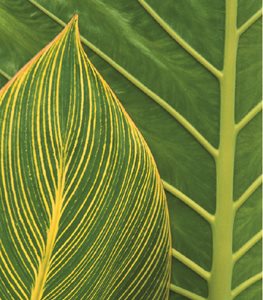 Mod Appeal: Structural to the extreme! Lush, oversize foliage like that of Canna 'Pretoria' and elephant’s ear Alocasia macrorrhiza provides a perfect foil for the spare straight lines of modernist architecture and offers a tropical, exotic look. Dramatic in mass plantings, but the simplicity of one elephant’s ear makes a bold statement.

Development of canna cultivars with striped or nearly black foliage, and others notable for their flowers, such as the Toucan® series that bloom in dark orange, scarlet, yellow, rose, and coral have made them popular in modern gardens. The 70 or so species of elephant’s ears are hardy in Zones 7 to 10, but are used seasonally in cooler regions because they grow so fast—up to 6 feet in one season. 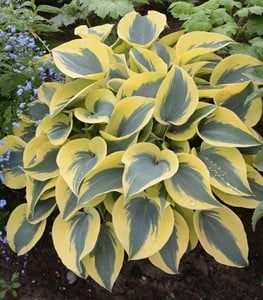 Mod Appeal: Unbeatable foliage plant, forming the backbone of many shade gardens. Use as a specimen in a pot or in sweeps of ground cover. 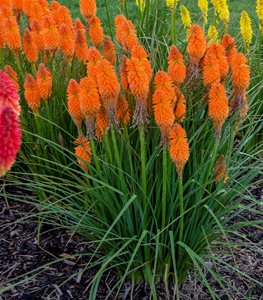 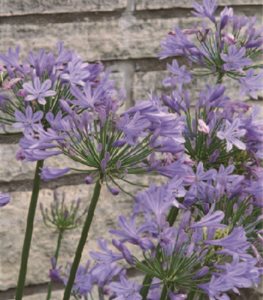 Photo by: Susan A. Roth.

Mod Appeal: Space-age globes of flowers float above mounds of strappy foliage, attractive even when not in bloom. Plant en masse or in a pot.

This conservatory plant from South Africa moved outdoors in the 1940s, just in time to become a darling of the modernists. Further breeding has produced plants with flowers in white (‘White Heaven’), variegated foliage (‘Tinkerbell’), and dwarf (‘Peter Pan’) or giant (‘Storm Cloud’) forms.

Learn more about how to grow agapanthus. 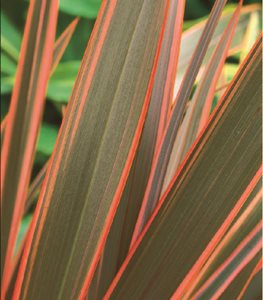 Mod Appeal: For designers concerned with form, texture and color, New Zealand flax (Phormium tenax) is a godsend. The long, leathery, swordlike leaves fan out boldly and hold their shape through thick and thin.

Breeding has produced some excellent garden varieties, both in form and color, e.g., Phormium ‘Sundowner’. 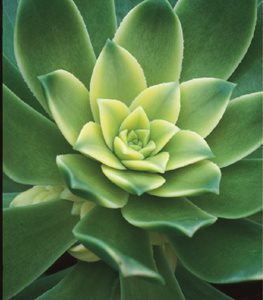 Mod Appeal: The fleshy, organic geometry of succulents is fascinating and seems particularly at home in contemporary settings. The California modernists in particular enjoyed the graphic impact of these low-upkeep plants in the garden and in containers. A conversation piece in windowsill gardens in cooler zones. Their symmetrical rosettes can be nearly flat to the ground or perched atop snaky stems.

In sunny, warm zones Aeonium haworthii ‘Variegatum’ (shown) branches readily into a mat of subtle foliage. For a dramatic focal point in a pot, try Aeonium ‘Zwartkop’, a black-maroon oddity. The aptly named ‘Dinner Plate’ is only 2 inches tall but 12 inches across. 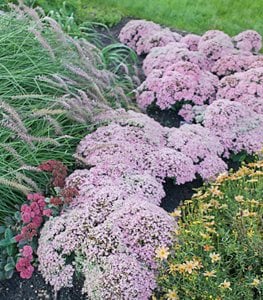 Mod Appeal: Tolerant of most soil types, drought- and disease-resistant with interesting foliage and long-lasting flowers appearing late in the season, sedums are an easy sell to any garden designer looking for an attractive, hardworking plant that plays well with others of the same ilk, such as grasses—just ask Oehme, van Sweden.

Update: Constant breeding work on sedums has introduced many superb varieties such as Rock 'N Grow® ‘Pure Joy’, which shares the all-round virtues of its family plus bubblegum pink flowers that attract butterflies and bees. Attractive seed heads follow after the blooming season.

Learn more about how to grow sedum plants. 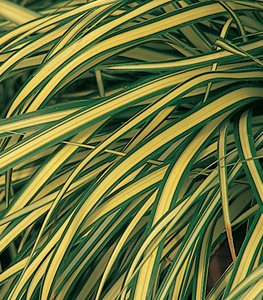 Mod Appeal: Fountains of delicate foliage and flowers are good foils for bolder plants and add movement to thegarden. Tall grasses make living hedges; shorter grasses and sedges are tidy yet informal edging. Handsome in the garden even in their winter tans and browns.

Grasses and sedges have taken the gardening world by storm. Varieties with variegated foliage, such as Evergold sedge (Carex hachijoensis) with dark green and bright gold striped leaves are popular. 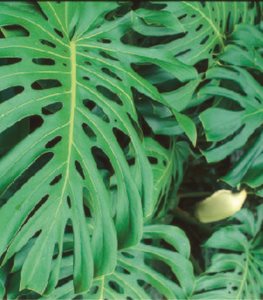 Mod Appeal: Swiss cheese plant (Monstera deliciosa) is a robust vine in warm zones and a houseplant farther north. Used in interiors so often at midcentury that it is synonymous with the fifties. Split-leaf philodendron (Philodendron selloum) has the same architectural look but doesn’t climb.

As if the deeply split and perforated leaves weren’t striking enough, ‘Variegata’ has white markings and ‘Marmorata’, splashes of yellow. 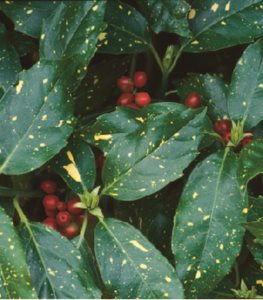 Mod Appeal: The modernists agreed with the Victorians on this one. Aucuba japonica has full-season interest with glossy evergreen leaves and red berries. Adaptable, easy shrub for shade. 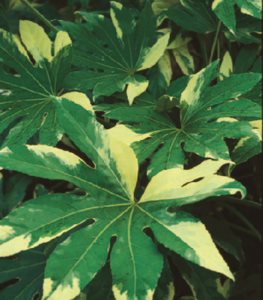 Mod Appeal: A native of Japan, Fatsia japonica suits the Asian-inspired style of many modernist homes, making a bold foliage plant for the shade.

Fatsia is a familiar houseplant that has made a transition to the outdoor landscape in warmer zones. The variegated leaves of ‘Aurea’ and ‘Variegata’ create a bright spot in shady gardens. The lace-doily leaves of ‘Manchu Fan’ are intricately lobed and nearly circular. 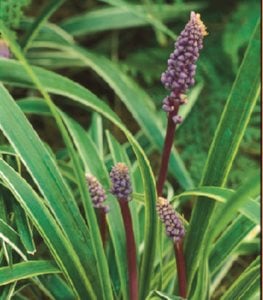 Mod Appeal: A cast-iron constitution, shade tolerance, and easy upkeep explain the appeal of smart and functional lily turf (Liriope muscari). But, like many other stalwart ground covers, it has been overexposed to the point of cliché.

Liriope muscari ‘Pee Dee Ingot’, on the other hand, inspires reverence among leading-edge gardeners for its fountains of chartreuse foliage—chartreuse being the in color, along with black, for foliage fanciers today.

Watch this short video to see how a modern planting plan was put together. 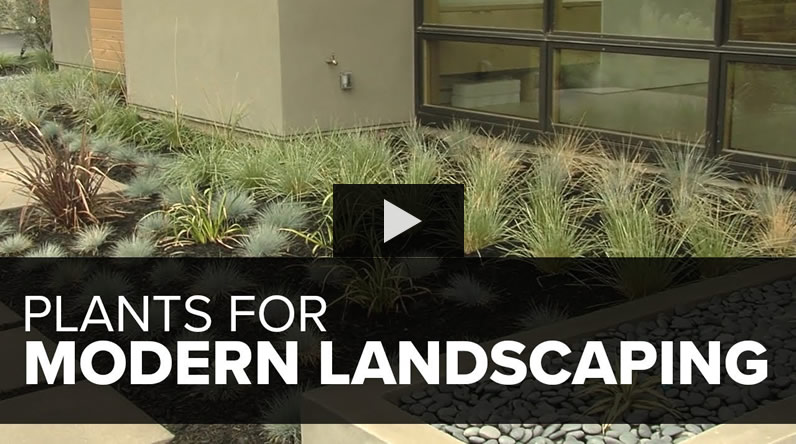 The History of Mid-Century Modern Plants

Just as architects veered off in a radical new direction in the years after World War II, garden designers were throwing off the yoke of the highly ornamented, specimen-packed gardens of the late 19th and early 20th centuries. Like their architect peer group, they embraced the modern principles of simplicity, efficiency and functionality.

Christopher Tunnard, a garden designer with a teaching appointment at Harvard who had migrated from Europe to America in 1939, produced a book, Gardens in the Modern Landscape (Architectural Press, 1938), which proved to be a major influence on the Eckbo, Church, Rose generation of modernist garden designers. On planting design,Tunnard was clear: “To plant is but a part of landscape composition; to co-ordinate is all.”

For the modern landscape designer, that translated into the sparing use of plants chosen for their sculptural rather than their decorative effects. They were to be enjoyed, like abstract art, for their color, form, texture and balance. Foliage was in, flowers were out. The point was to provide a backdrop for the evolving suburban way of life. Tunnard said, “Landscape architecture is indispensable for living the good life…it is for human enjoyment in the 20th century, not for Sunday promenading in the 19th.”

The midcentury also ushered in the glory days of the American lawn, long before concerns about water conservation reached a head. Manicured turf was everywhere: subtle, monochromatic, minimal—and, if you didn’t think too much about it, it even looked low maintenance. Midcentury designers lauded the low-maintenance garden, which not only carried forward the lessons of good design, but also gave the garden back to everyman. Today’s designers tend to speak rhapsodically about native plants for similar reasons. It was a time of purposeful austerity, a time when gardens were composed of a limited plant palette, marked by the repetition of shapes and materials.

Of course some of those midcentury plants have hung around and are mainstays today—a testament to their reliability. Some have been the source of renewed interest, thanks to plant breeders who have reinvented the old favorites—coleus, for example. “New” modern plants have also entered the arena—ornamental grasses and garden varieties of American natives, such as Rudbeckia. Understanding the principles of modernist design makes it possible to fill out the contemporary plant list with species and cultivars that weren’t available 50 years ago yet are still appropriate to the philosophy. The march goes on because the lessons of good design never go out of style.