How to Get Rid of Voles in Your Garden 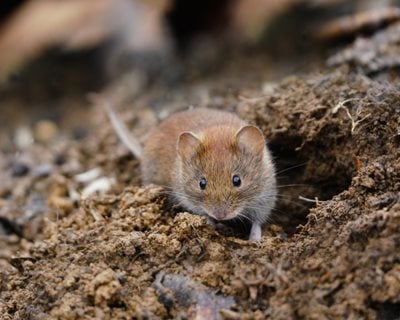 Dealing with pests can be one of the most trying aspects of gardening. Whether it’s insects or animals, it seems like there’s always something disturbing our plants. Voles are one of those creatures that can wreak havoc if not properly identified and controlled. Voles cause damage to lawns, gardens, golf courses, crops, orchards, and young trees. Damage can be severe when populations surge.

There are many different ways to deal with voles. Effectiveness depends on many factors, including property size, type of method, vole population, time of year, and weather. Here are some suggestions:

On this page: 5 Ways to Get Rid of Voles | Methods to Avoid | Precautions | Vole Damage: Identify, Repair, Prevent | Voles 101

5 WAYS TO GET RID OF VOLES

When should you call a professional? If you’re in need of a quick solution, have a large area to treat, or are heavily infested, you may want to call in a professional. Once they’ve come in and gained the upper hand, you may be able to take over and maintain control.

Chemical poisons and baits should never be used to control pests of any kind, as they are often ingested by pets and beneficial wildlife. Poisonous pest controls pose a major threat to birds of prey such as eagles, hawks, and owls, as well as many wild mammals as they can become secondarily poisoned by eating an animal that has ingested the poison.

Remedies such as fumigants, flooding, electromagnetic or ultrasonic devices may be less effective or ineffective at controlling voles.

Voles seldom come into direct contact with humans, but can carry diseases such as rabies, hantavirus, plague, salmonella, tularemia, and tick-borne illnesses such as Lyme’s disease, Rocky Mountain spotted fever, and babesiosis. When working around areas that voles frequent, make sure to wear close-toed shoes and rubber gloves to avoid possible contact with vole urine and feces. 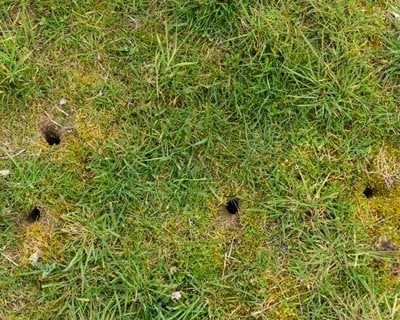 HOW TO IDENTIFY VOLE DAMAGE

Voles create an extensive network of shallow underground tunnels 2 inches wide. The most visible indication of their presence is the above-ground burrow openings that are connected by well-used runways, which may be partially obscured by grass or groundcovers.

Voles damage plants above and below ground, eating roots and bulbs when they tunnel and consuming plant stems and leaves when above ground. Dead patches in lawn areas are created where voles create runways and feed on grass.

Look for signs including droppings, fresh trails with clipped or trampled grass, and plants that suddenly wilt or die. There may be gnaw marks on garden plants, vegetables, and around the base of trees and shrubs. Extensive tree root damage can cause dieback of the crown and leaning.

These destructive rodents stay active throughout winter, eating plant roots, bulbs and bark while snow cover hides their activities. Winter damage may not be fully evident until spring when the snow melts and voles become more active.

HOW TO REPAIR VOLE DAMAGE

Damage is usually most severe in spring when voles are most active. In many cases, plants will recover on their own once the vole population is under control. Destroy runways and burrows with a shovel or rototiller to discourage new voles from moving in. Rake up dead grass and replant bare areas with grass seed to restore lawn areas where runways are present.

HOW TO PREVENT VOLE DAMAGE

One of the best ways to discourage voles is to make your yard less inviting. Voles need cover to survive and will avoid open areas. They prefer heavy vegetation, as it provides protection from predators.

Protect trees: Clear areas around young trees and avoid dense mulching to discourage voles from nibbling the bark around the base. A 4-foot buffer is usually sufficient, as voles don’t like to feed out in the open. For fruiting trees, pick up any fallen fruit.

Clean it up: Keep areas underneath bird feeders clean to discourage voles and other vermin.

WHAT IS A VOLE?

Commonly referred to as meadow or field mice, voles are rodents that are related to hamsters and lemmings. They have a mouse-like appearance, with a stocky build, rounded ears, and dense fur that is brown, grey or black. Adults can reach 5 to 8 inches long, including the tail.

Voles can breed at any time of year, with peak breeding in spring and summer. They reproduce quickly which can add up to a large vole infestation in a short amount of time. The average lifespan of a vole is 6 months to a year.

WHERE DO VOLES LIVE?

Voles prefer open grassy areas and fields, but can also venture into residential yards. Voles will seldom go inside homes. The presence of voles is more likely in suburbs or properties that border natural areas than in urban settings. Voles burrow tunnels just beneath the soil surface where they eat and nest, but they spend time above ground as well. They are present in most regions and are active year-round. 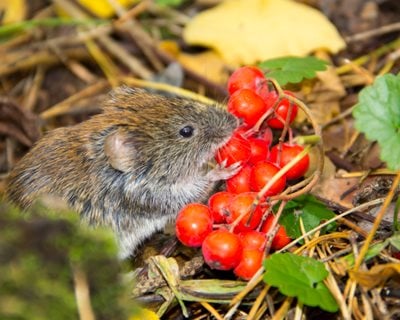 WHAT DO VOLES EAT?

Primarily herbivores, the preferred food of voles is the stems and blades of grass. They will also eat roots, bulbs, and tubers, feasting on the bark and roots of trees and shrubs primarily in fall and winter when other food is more scarce. Other food sources may include insects, dead animals, vegetables, fruits, seeds, and nuts.

These two garden pests are often confused for their similar name and tunneling behavior. Since both are rarely seen, they can best be distinguished from each other by the telltale signs they leave behind. Moles create deeper tunnels with shallow mounds at the surface, while voles leave no mounds behind.

Mice have larger ears and eyes, and their snouts are more pointed. Voles have a compact build, while mice are more slender. Mice have tails that extend nearly as long as their body, while voles have shorter tails.