Queen Anne's Lace is a weed, but an undeniably beautiful one, whose botanic descendent is the domesticated carrot, and named for the royal lace-maker Queen Anne of Scotland. By Anna Laurent

Flowers can evoke wonderfully vivid memories and for me, reliably, it is the August wildflowers that send me into the golden fields of my past—in particular, reminding me of a summer I spent on Nantucket and the flowers I met there. 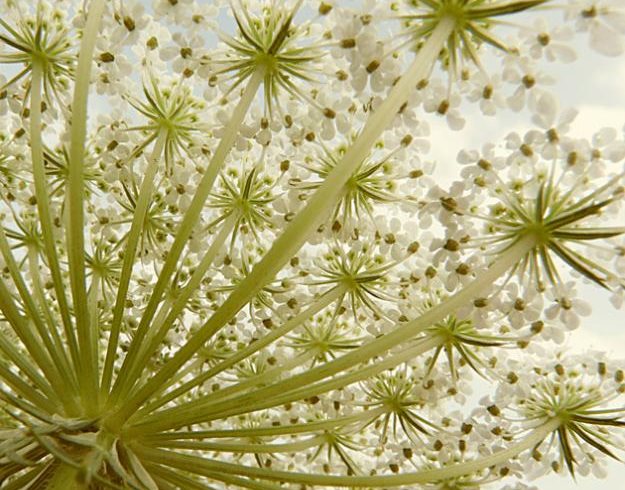 As a "flower girl" apprentice at a wildflower farm, I would tend the gardens, make bouquets for market, and come up with mnemonic devices to learn the names of our flowers. Of all the flowers—hydrangeas, Joe-Pye weed, black-eyed susans—the one that seems to signify everything I love about the island is Queen Anne's Lace (Daucus carota). We often used the flower in our bouquet arrangements and I loved the way it accented our brightly-colored flowers with a dusting of white. It reminded me of a soft New England snow or the stark white ruffles of Elizabethan fashion. 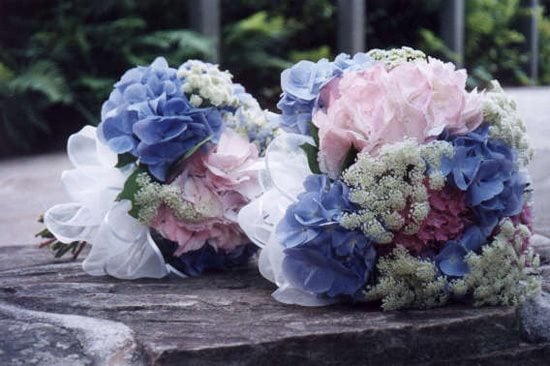 Hardy yet delicate, and predominantly white (with occasionally muted tones of pink and blue), the beautiful flower seems to me like a botanic emblem of New England. In this setting of harsh, yet redemptive weather and rugged, enduring landscapes, Queen Anne's Lace is a perfect flower—a matching color palette of elegant whites, and a cautionary life cycle that seems to fit New England's unrelenting seasons.

In its first year of growth, Queen Anne's Lace develops a tap root and a rosette of basal leaves. Not until its second year does the plant send forth a flower stalk that blossoms, before attracting pollinators, dispersing seeds, and dying. This life cycle makes for an effective strategy to moderate resources for the flower and seed, as the developing tap root becomes a reserve of energy for the coming year, like canned preserves in the cellar. 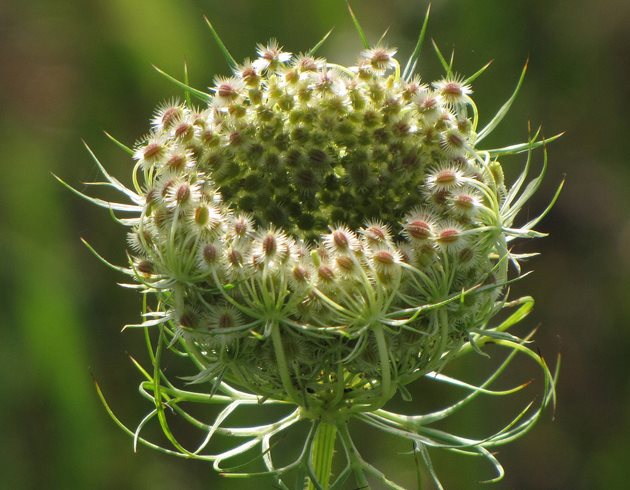 The flower begins and ends in a saucer shape or "bird's nest." When the flowers are pollinated, the umbels turn inward, as they haver here, and will mature as they wait to cling onto a passer-by. Photo by: Flickr/Blue Ridge Kitties.

What we usually call a Queen Anne's Lace blossom is, of course, not a single flower, but a colony of about 30 umbellets, all of which are complete flowers. A series of Queen Anne's Lace macro images can be found here, including images of its life cycle timeline—from early umbrella to seeding "bird's nest"—and some wonderful pictures of its architecturally spectacular underside bracts. 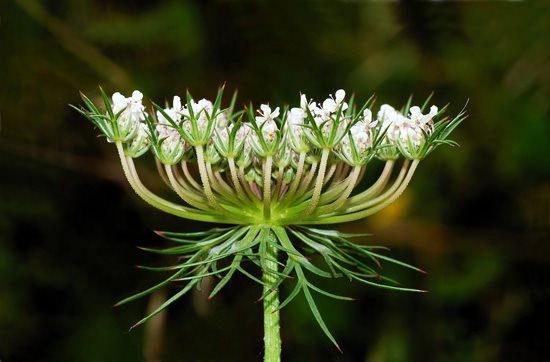 Many umbels are adorned with a single dark purple flower in the center of the cluster. The flower is sterile, however, and botanists aren't sure what purpose it serves—resembling an interloping insect, the tiny dark floret could either attract pollinators, or repel predatory insects. Royal folklorists. however, have an idea of why the flower is darkened with a small drop. 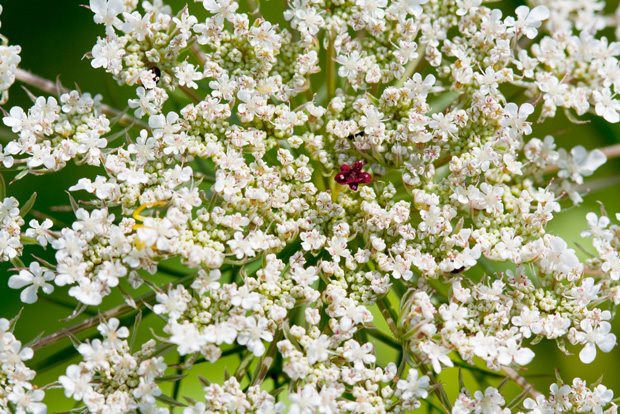 A dark red sterile flower at the center of the flower. Photo by: Flickr user Stephen Begin.

With its native origins in Europe, Queen Anne's Lace was later naturalized in American gardens and with the seeds came their stories. The flower is named for Queen Anne of Denmark (1574-1619), apparently an expert lace maker. As the story goes, she once pricked her finger while sewing. And a drop of blood became forever embedded in her royal lace, and in the center of her namesake flower.

A profile of the plant would be remiss without several additional notes. First, while it's often assailed as an invasive weed, the taproots of Queen Anne's Lace are edible, and they smell like carrots, as the plant is a wild progenitor of the domesticated carrot (Daucus carota subspecies sativus). Second, beware of imitations! The flowers and leaves of the "wild carrot" closely resemble hemlock, which is, indeed, poisonous. Third, some people are allergic to the leaves of Queen's Anne Lace.

And, finally, a poem:

Her body is not so white as
anemony petals nor so smooth-nor
so remote a thing. It is a field
of the wild carrot taking
the field by force; the grass
does not raise above it.
Here is no question of whiteness,
white as can be, with a purple mole
at the center of each flower.
Each flower is a hand’s span
of her whiteness. Wherever
his hand has lain there is
a tiny purple blemish. Each part
is a blossom under his touch
to which the fibres of her being
stem one by one, each to its end,
until the whole field is a
white desire, empty, a single stem,
a cluster, flower by flower,
a pious wish to whiteness gone over-
or nothing.