"Have you been to Great Dixter?” is the question on the lips of anyone debriefing a gardening friend who has been traveling in England. Great Dixter has a reputation for being one of the most talked about of British gardens, and certainly the one that has acquired the highest reputation amongst overseas visitors. Most unusually, it has managed to keep this reputation for many decades, even through a change of hands. It initially came to fame through its owner Christopher Lloyd (1921-2006) who lived in the half-timbered fifteenth-century house all his life. Lloyd (or “Christo” as he was known) was not only a gifted and artistic gardener but a prolific, knowledgeable, and witty writer whose magazine articles and books inspired and informed a generation of gardeners. 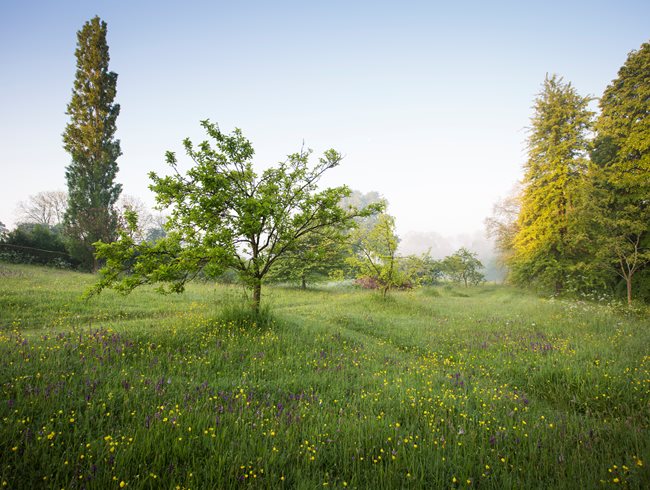 A natural plant community—a meadow of wildflowers, including many orchids—is an integral part of Great Dixter, one of England’s most revered gardens. Its wild spirit seems to spread throughout this vibrant and diverse landscape. Wildflowers include purple Orchis morio syn. Anacamptis morio (greenwinged orchid) and yellow Ranunculus acris (buttercup). Photo by: Claire Takacs.

Dixter is managed today by the Great Dixter Charitable Trust and Fergus Garrett, whom Lloyd took on as head gardener in 1992. The two had a wonderfully creative working relationship, being two people with a passion for plants and plant combinations, and the transition to Garrett’s taking over after Lloyd’s death has appeared almost seamless. Today 50,000 visitors a year find Great Dixter as vibrant a garden as ever, and full of things to learn from. What is the secret of its success?

The answer lies partly in Garrett’s unique management style but more fundamentally in the philosophy that Lloyd developed. Lloyd is famous for once having said: “Everyone is on about low-maintenance gardens, I’m interested in high maintenance.” In other words, “if you love gardening, don’t be afraid to garden” and “a great garden needs work.” Although there is a foundational planting made up of permanent, long-lived, low-maintenance plants (shrubs, perennials, grasses, bulbs), amongst and between these are seasonal plantings, which need to be constantly replaced. The changing borders add what Garrett describes as the “dramatic, colorful, and showy” elements. It is the relationship between the permanent and the temporary plants that sets the garden alight, maintains the Dixter mystique, and attracts the accolades of its devotees. 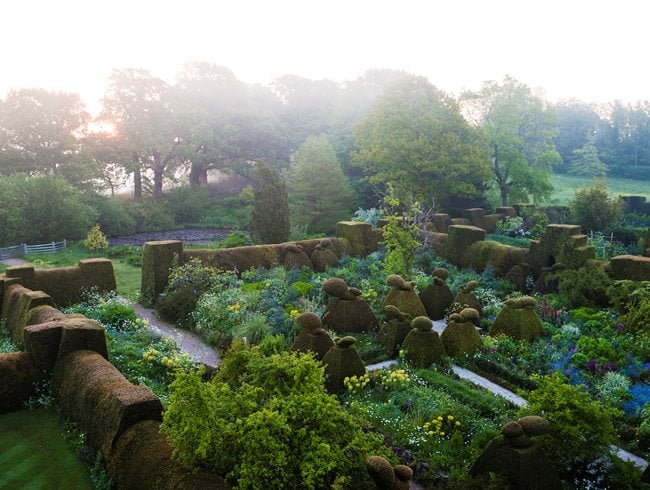 This garden features 18 topiary birds, which, over a century or so, have morphed into generic peacock shapes. The blue here is Myosotis sylvatica (forget-me-not) which flowers profusely in late spring. The spots of yellow-green are Euphorbia characias ssp. wulfenii, the scattered white is Anthriscus sylvestris (cow parsley). Photo by: Claire Takacs.

The creative tension between formal structure and rambunctious planting is at the heart of the appeal of the Arts-and-Crafts British garden style—Great Dixter exemplifies the style at its most wildly creative level. This tension is explored primarily through having formal elements that are more or less unchanging, whereas much of the looser planting will look different from week to week. “But then there are areas that have stayed the same forever,” says Garrett, “some for 10 years, but then there are some that are touched every year, and some three times a year.” Temporary plantings involve tulips, annuals, biennials, or tender perennials, and typically include replacing spring-flowering plants with summer-flowering ones in May or June. Garrett has upped the pace in some places by replacing summer-performing plants with others in September, to take advantage of the long autumns typical of the southern England climate. 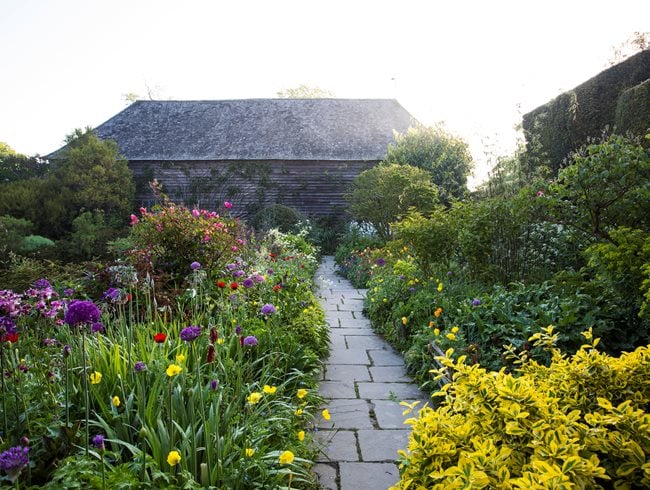 See the images below for close-ups of some of the plants growing here. 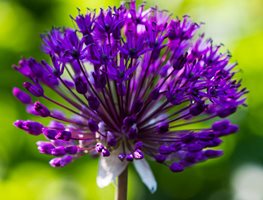 Allium hollandicum ‘Purple Sensation’ is the deepest in tone of the drumstick allium species—which are wild garlics from central Asia, and therefore ideal for hot, dry climates, but seem very tolerant of cooler and wetter locales too. (See more Alliums.) 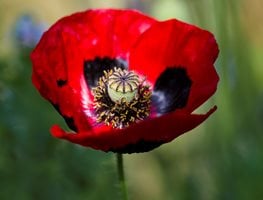 Papaver commutatum is known as the ladybird poppy. This cheerful annual provides several weeks of dramatic color on 2-foot stems. Easily grown by direct sowing in the ground, seedlings may also be container-grown and carefully planted in a border come spring. 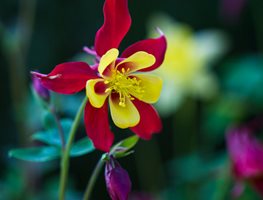 Aquilegia ‘Kansas’ flowers for about a month in early summer. It grows 32 inches high, and its flowers float above clumps of attractive divided foliage. Aquilegia species grow well interspersed amongst later-flowering, larger perennials, and in many gardens will self-seed.

Great Dixter is a high-energy garden. Its visual impact depends on achieving strong contrasts, of sparking color against color and shape against shape. Much of the pleasure of walking around the gardens is the chance to appreciate plant combinations. Whereas perennials and shrubs are sometimes the only plants used in contemporary styles, at Great Dixter they provide the body of the planting. “We have plenty of bones,” says Garrett, “and try to play plant combinations off those bones.” Much of the energy is provided by the annuals, self-sown plants, and others put in for temporary effect. “There is a lot of self-sowing, or plants that are planted in such a way as to imitate self-sowing, so they knit the whole thing together,” explains Garrett. Self-sowing plants tend to be short-lived, often free-flowering; their random distribution brings a unity but also a feeling of spontaneity.

While annuals and bedding plants are conventionally used in a relatively formal way, here their use is much more relaxed. There are none of the geometric blocks or big groups of the same variety usually associated with seasonal plantings. That they are intermingled with clumps of perennials, shrubs, and topiary makes for a high level of complexity and diversity of viewpoint. Splashes of color and interesting leaf and flower-head shapes pop up between other plants. Very often, a plant can only be seen through the scrim of another’s stems. The impact is that everything here appears to have grown by itself—although in fact it is constantly edited and managed. 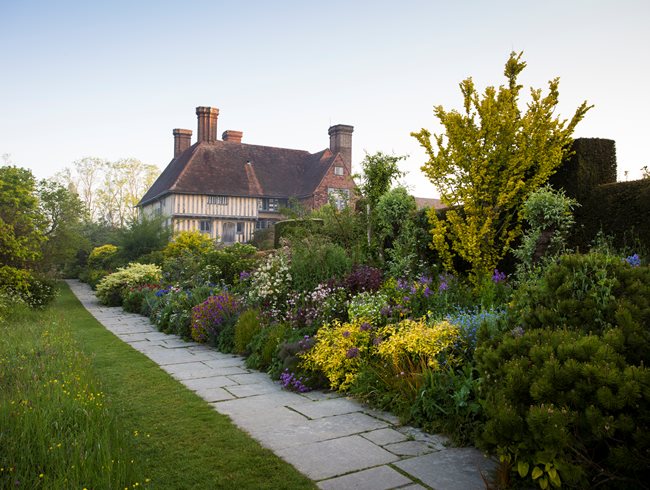 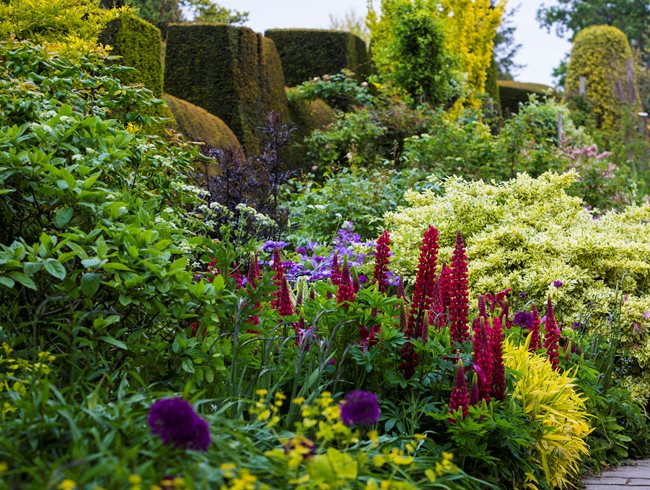 Lupinus polyphyllus ‘The Pages’ provides early summer color as well as essential vertical structure in the long border planting along the stone path near the house. Photo by: Claire Takacs.

As if the exuberance and complexity of the planting at Great Dixter were not enough, the garden is partly surrounded by another wonder: extensive areas of meadow, whose origin dates back several centuries. The survivor of a traditional form of northern European landscape management, these grasslands, rich in wildflowers, would have been cut for hay in midsummer and then grazed until the winter in the past. With Great Dixter helping lead the way, restoring old meadows or making new ones has become an important part of ecological garden practice now in Britain.

“The meadow helps give a settled feeling to the garden,” says Garrett. “We mow it two or three times a year, in August after the last orchid has seeded and again in autumn. The cutting has to be very flexible, and in some places we only cut every two years, so we are creating a mosaic of habitats.” Clippings are removed, as it is fundamentally important to keep fertility levels in the meadow low. This limits the growth of the grasses, allowing the less vigorous wildflowers to flourish. The varying rate of cutting Garrett refers to creates a series of microhabitats, allowing different species to thrive in different areas, increasing biodiversity. 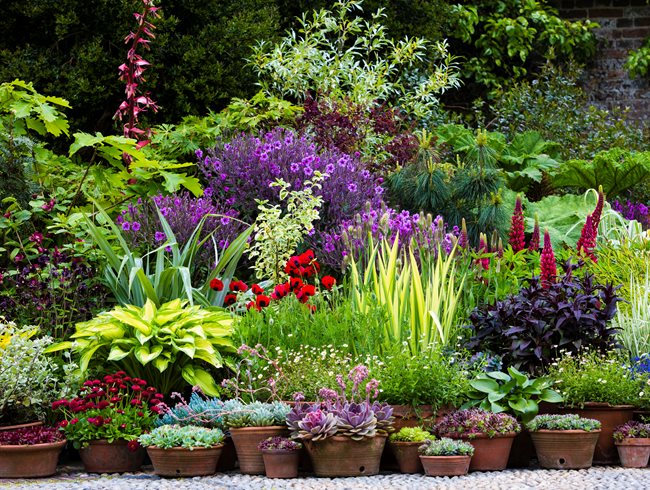 In certain places the yew hedge and topiary separate the meadow and the more formal gardens. In other areas, meadow surrounds isolated topiaries—the effect is perhaps the ultimate in garden creative tension. However there is a real sense of continuity as parts of the border plantings are so “wild” that by the time the visitor gets through to the meadow they will have become accustomed to the spontaneous appearance of native plants. From spring to early summer the light, feathery, unemphatic nature of wildflowers is echoed throughout much of the borders, so the natural processes of the meadow and the intensely managed garden are subtly, creatively, and continuously linked. 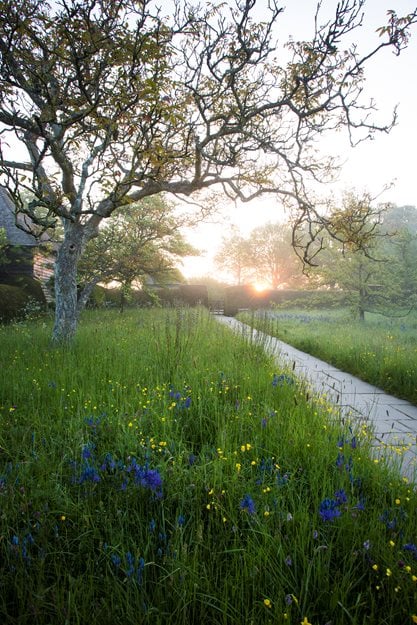 Blue-flowered Camassia quamash, the camas of damp prairies in the U.S., has become a popular plant in British gardens, blooming year after year and slowly increasing. Other species include Trifolium pratense, Ranunculus acris, and Dactylorhiza fuchsii. This area, with a few surviving apple trees, acts as a transition between the more intensely planted gardens and wilder meadows. Photo by: Claire Takacs. 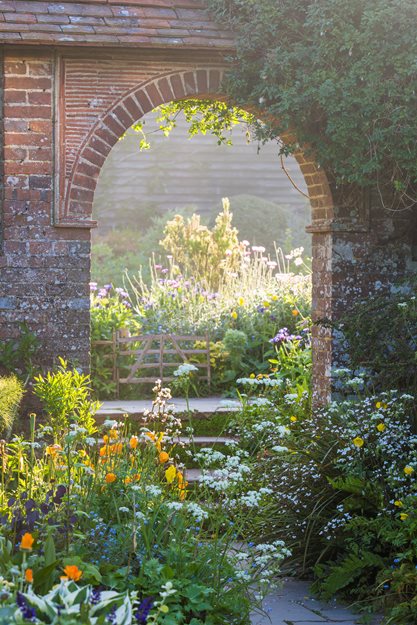 Cow parsley alongside orange- and yellow- flowered Welsh poppies in a border. These are two examples of self-seeding plants that, in some cases, need management to prevent them from spreading too enthusiastically. Neither, however, takes up too much space and they are easily pulled out. Allowing in wild species creates a subtle, almost subconscious link to the surrounding. Photo by: Claire Takacs.

THE METHODS OF A MASTER PLANTSMAN

The carefree feeling is more difficult to achieve than it might seem, requiring good organization, management, and hard work. This is the human side of the story of Great Dixter’s success as a garden. There is a constantly changing mix of people: permanent gardeners (who add up to five full-timers), students (from all over the world and who sometimes have waited years for the chance to work here), and others, including local youngsters who need a helping hand. “A right odd mixture of people, giving the place almost a commune feeling,” explains Fergus Garrett. “The sense of energy that comes out of this combination of people is great. There’s a sense of fun and adventure, everyone is trying new things, and examining what works and what doesn’t.” 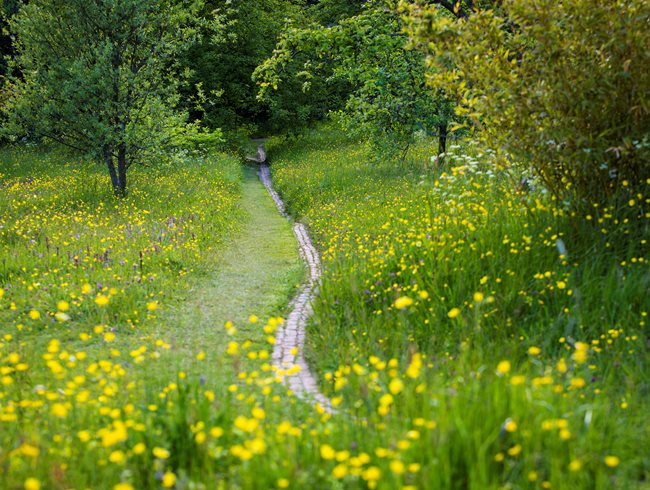 A stone-block path leads through the meadow in early summer, with a number of the yellow daisy and buttercup species that play an important part of these habitats as nectar, pollen, and seed sources for wildlife. The purple is mostly Dactylorhiza fuchsii (spotted orchid). Parts of the meadow also contain heirloom daffodil varieties, mostly Narcissus ‘Princeps’, planted in the 1900s. Photo by: Claire Takacs. 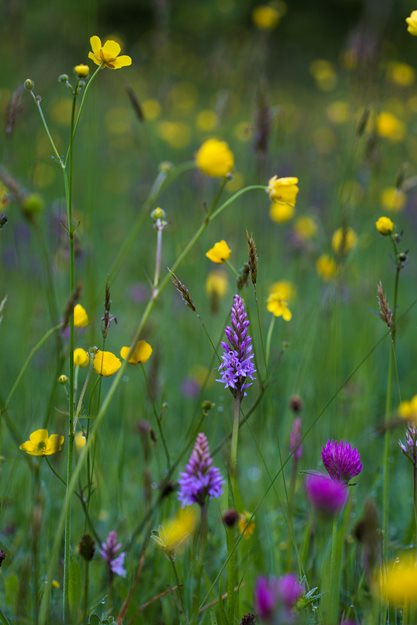 However, jokes Garrett, “It’s still a bit of a dictatorship because I have the final call. But we are open to everybody’s ideas.” In fact ideas are encouraged, indeed they are required. “Even the newest members of the team get involved from the start,” he adds. “I get students to go down to the nursery and come up with suggested combinations. They should constantly be looking and thinking of ideas. They should go to bed thinking about plant combinations! It is very participatory, but we don’t garden by committee. I pluck ideas out, and then we sit down and plan.”

Garrett frequently assembles and works out “mind maps”—listing tasks and organizing what can be done in the rain, and what needs dry weather. Work is mostly done as a group; everyone works together in one part of the garden at once. This approach, which is collaborative, experimental, and high-energy, seems more appropriate to a design studio or laboratory, but then perhaps that is what Great Dixter is—gardening’s own Research and Development department.

RELATED: How to Create a Meadow Garden