An Englishman famous for his plantmanship, on full display at Great Dixter, inspires American gardeners to go outside the lines By Tom Christopher

On the face of it, he's a most unlikely mentor for this generation of self-consciously American gardeners. But ask the leaders of the new, distinctively native style that has grown up on this side of the Atlantic over the past few decades and a disproportionate share talk of their debt to Englishman Christopher Lloyd. 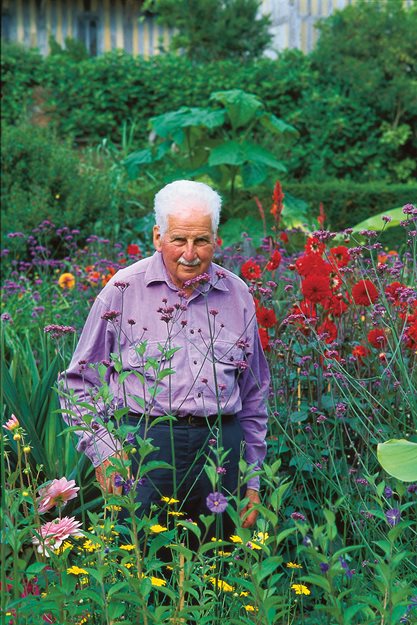 The truth is that “Christo,” as he is known to an astonishingly broad circle of horticultural admirers and friends, has made a long and distinguished career of confounding expectations. Son of a well-to-do businessman-turned-country-squire, Lloyd inherited a famous garden along with Great Dixter, the 1450’s manor house in which, at 84, he still lives*. Edwin Lutyens, Gertrude Jekyll’s design partner, had helped Lloyd’s father (a noted gardener in his own right) lay out the complex of yew hedges, lawns, paths, terraces and borders that surround the house, and the son could reasonably have been expected to content himself with playing curator. He could have devoted the years of his stewardship, National Trust style, to maintaining the status quo. Instead, Lloyd took a degree in horticulture at the Wye College campus of the University of London and proceeded to make the Great Dixter garden distinctively, gloriously his own.

He became famous in part for his plantsmanship. That was what impressed a young Dan Hinkley on his first visit to Great Dixter in 1980. Seven years later, Hinkley would found Heronswood, the nursery that has become the pre-eminent source for new and rare garden plants in the United States, and he recalls his meeting with Lloyd as crucial in his own development as a plantsman. 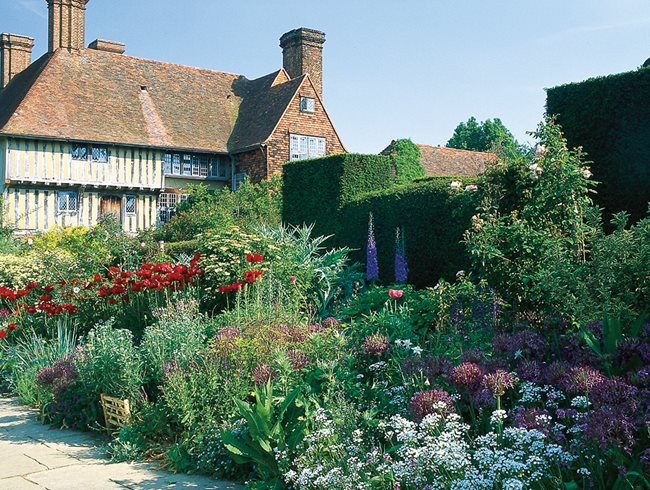 What struck him was Lloyd’s special sensibility. His genius, Hinkley realized, lay not only in his connoisseur’s eye for a superior species or cultivar, but also in the daring imagination with which he used his finds. Lloyd’s style of planting is not the harmonious pastels of English tradition. Rather, he tests the limits of contrast, matching discordant flowers and foliages to fill his coolly architectural landscape with drama. He will, for example, combine the luminous orange of a Saint John’s chamomile (Anthemis sancti-johannis) with a magenta purple of an Armenian cranesbill (Geranium psilostemon), or the bold foliage of a hardy Japanese banana with the purple haze of self-sown Argentine vervain (Verbena bonariensis).

That detail, Lloyd’s willingness to let plants sow themselves and find their own place within the garden, exemplifies what Marco Polo Stufano said made him love Great Dixter “from the first moment I saw it” in 1967. Stufano was a young man in a hurry then, having just taken over management of Wave Hill, a neglected 28-acre estate that, over the next couple of decades, he would turn into the most exciting public garden in the United States. He didn’t meet Lloyd on that trip; intent on seeing as many English gardens as possible, Stufano had no time to talk. There was a strong sense of the man, though, Stufano says, in the “freedom” with which he used the plants. 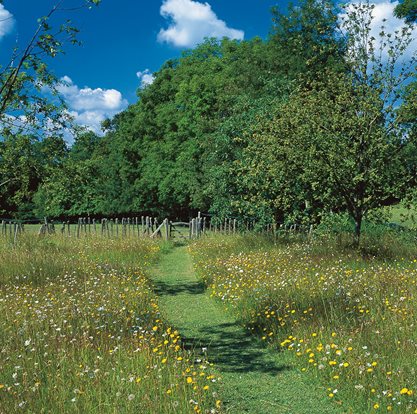 Stufano would pick up on the use of self-sown plants in his own garden making at Wave Hill: “We always counted on self-sowings.” What he found at Great Dixter, though, on that first trip (he has returned many times since and now counts the owner as a friend) was far more than this simple trick. Lloyd was an early advocate of meadow gardening (he credits his mother with first bringing wildflowers into the area of uncut grass through which one approaches the house). He has, according to Stufano, a crucial affection for species-type plants or for cultivars in which the wild grace and beauty persist. This gives his plantings an extraordinary fluidity. At Great Dixter, Stufano found none of the “paint-by-numbers” planting in sharply delineated blocks that he so disliked in American gardens of that era (the late ’60s and early ’70s). Instead, Lloyd let the plants intermingle.

That most difficult horticultural balancing act, of loosening the constraints on the plants without abdicating artistic control, is something we as Americans still need to study, according to Stufano. Hinkley says that on a visit this past summer he found a model for horticultural maturity: Lloyd’s appetite for plant novelties seems to have slackened, overtaken by a fascination with wringing startling new looks out of tried-and-true plants by juxtaposing them in unexpected ways.

It is Lloyd, though, who (typically) has the last word. Soon after taking on a young horticultural collaborator, Fergus Garrett, in 1993, he wrote of how the two of them had just ripped out Edwin Lutyens’ rose garden to make space for an “exotic garden” in which they would experiment with plant combinations intended to create a tropical effect in late summer and fall. “We’re going places,” wrote Lloyd, then well into his senior years, “and it’s exciting.” If there is a spirit of American gardening, that must be it.

*Lloyd passed away shortly after the publication of this article and has been greatly missed ever since.