Arbors, Trellises, and the Edible Garden

Why not lure your vegetable crop up toward the sky this year? Arbors and trellises create visual interest and additional acreage for your plants. By Bill Marken

Why did I coax a sprawling-by-nature Armenian cucumber and its yard-long cukes to grow 6 feet up in the air? Probably for the same reason, I’m guessing, George Washington espaliered apples at Mount Vernon and Thomas Jefferson trellised lima beans at Monticello: for the satisfaction that comes from creating something aesthetically pleasing that also offers an epicurean payoff. But unlike Washington, whose tree work provided decades of beauty, I was tackling the recurring dilemma that occurs when you grow vegetables in a typical garden situation—the annual face-off between the practical and the ornamental. 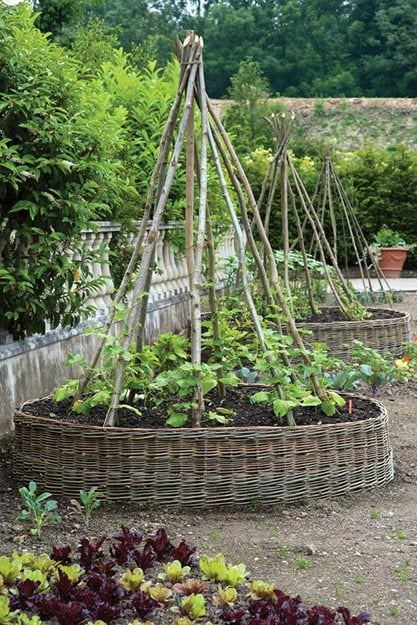 Of course, there’s something beautiful about neatly planted rows of productive vegetables, but if you’re short of space, want to add vertical interest, or just like creating order among some unruly sprawlers, there is nothing like a trellis or arbor. In the beginning of the season, the structure offers an interesting visual anchor; a month or so later it is completely transformed by the plant and then later by the harvest. The following year, you can move the structure and try it somewhere else.

“Vertical structures turn a vegetable garden into a magical place,” says landscape architect Jennifer Bartley of American Potager in Granville, Ohio, who uses them at home and on her design projects. “They create spaces that seem like an enclosed room, a special destination where you want to be.” Trellising systems come in all shapes and sizes, so the first thing is to decide what effect you want. For example, there’s nothing more welcoming than a vegetable garden that you enter through an arbor draped with lush green foliage and, say, dangling pole beans. Arbors of this size, preferably 8 feet or taller (available in kits, custom-built, or pre-made), work best with rapid growers such as beans or gourds. 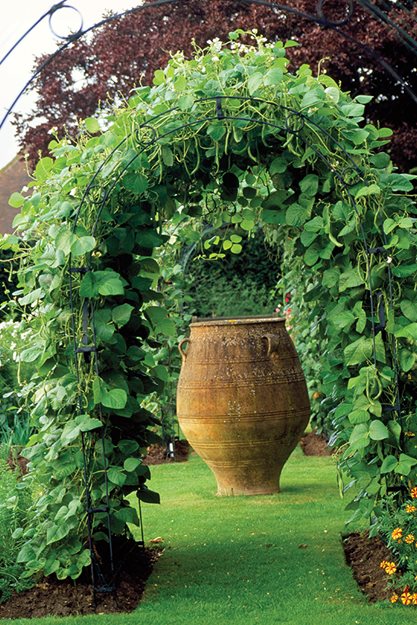 Another traditional support for edibles, an obelisk-shape tuteur makes a striking sculptural statement. A pair on either side of a path can create an entryway to a kitchen garden; a single tuteur can add height and drama to the center of a mixed flower border. Scarlet runner bean, with colorful, edible flowers and pods, counts as both flower and vegetable. “Be bold with tuteurs,” advises Bartley, by which she means go big. Smaller versions of these structures may disappear as soon as plants leaf out. “A minimum height of 6 or 10 feet is not too large in a big space,” she says.

Other types of trellises, either stand-alone or wall-mounted and suitable for vegetables, come in countless shapes, styles, and materials. Tall, narrow forms set into containers can display smaller plants on patios or decks; in those more intimate settings, it’s best to go with finer materials such as lattice, bamboo, or copper pipe that won’t be visually overwhelming. Colin McCrate, whose Seattle Urban Farm Co. works mostly with clients who have small city spaces, prefers a traditional, functional, agrarian look: A 6-foot tepee for pole beans or peas consists simply of three bamboo poles anchored in the soil and tied at the top with twine. Bartley has her own version at home: eight bamboo poles fastened with twine and painted royal blue to match her dining room. Riffing on some of those same classic trellis systems, Los Angeles landscape designer and artist Jennifer Asher creates brightly colored contemporary sculptures that can also support twining vegetables and other climbers—and look great in the off-season when nothing is growing on them. Her TerraTrellis supports are made of welded steel and cable. They include a generously proportioned two-hoop arbor; a small square trellis that can fit into a container and displays a vine like a picture frame; and a 6-foot steel tuteur in wild chartreuse or fuchsia that can support tomatoes, summer squash, or gourds. 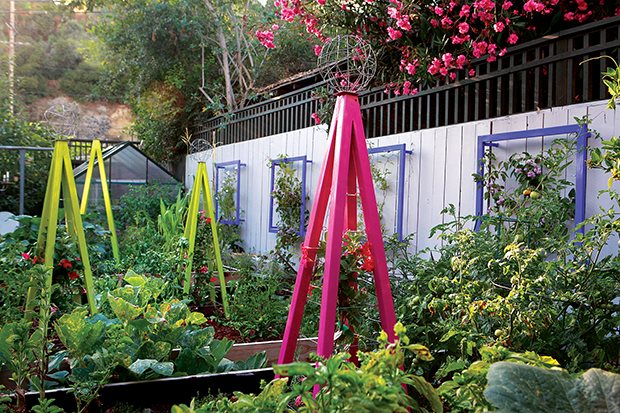 TerraTrellis’ Akoris Garden Tuteurs and Ina Wall Trellises add order and drama to an organic vegetable garden at a home in the Highland Park section of Los Angeles. (Photo by Lauren Devon)

Whichever system you use, make sure to choose suitable plants. For lightweight trellises or tepees, it’s simplest to go with vining crops equipped with tendrils for clinging, such as peas and beans. (Get the climbers, not the bush types.) For something different, try Chinese yard-long beans, which yield up to 30-inch-long beans in only a couple of months. Non-climbing squash, cucumbers, gourds, melons, smaller pumpkins, and tomatoes also work but typically have to be coaxed upward with twine or other ties. For really fast coverage, consider hyacinth bean or Malabar spinach (a heat-resistant vining perennial, not an actual spinach but high in vitamins A and C and used in several Asian cuisines).

Or you could always join me and try Armenian cucumber. This misleadingly named member of the muskmelon family requires a tall, sturdy trellis but is easy to grow and yields awesome results—prolific, 2- to 3-foot fruits with furrowed, light green skin so thin it needs no peeling. And as for taste, its satisfactions are fit for a president.

A quick look at the different structures available: 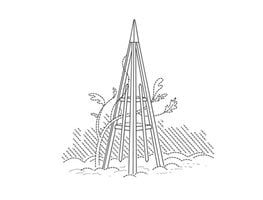 An obelisk-shape trellis is well-suited to serve as a centerpiece or, in pairs, at entranceways. On larger tuteurs, try mini melons, such as 'Minnesota Midget’, or 'Kiwano’ cucumber. 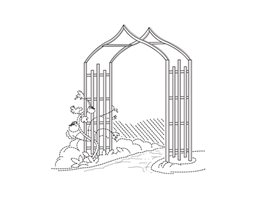 A crop-draped arbor makes the perfect portal leading into a vegetable patch or, when set into the garden’s interior, a visual landmark or shaded opportunity to ponder the tasks at hand. 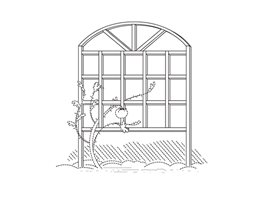 Choose a trellis that’s sturdy enough to support the plant and its bounty and big enough that you’ll see portions of it at the end of the season, when the plant has fully matured.