How to Plan an Heirloom Vegetable Garden

As Mick Kopetsky digs his shovel into the mound of soil piled along the kitchen-garden path, the smell of good, clean dirt rises along with warm compost steam into the morning air. “Secret recipe,” he smiles, as he picks up a handful of the earthy concoction and lets it sift through his fingers, like the fine crumb of a pastry mix. He tosses a shovelful between a row of crisp ‘Cornetto di Bordeaux’ escarole and red-fringed ‘Regina di Maggio’ lettuce. “The garden just eats it up.” Indeed, if the lush bounty of organically grown produce he harvests year-round from this two-thirds-acre potager is any indication, his recipe deserves a Michelin star.

“What would you expect from a collaboration between a garden designer and a student at Le Cordon Bleu?” jokes Kopetsky, as he throws a glance up to the house on the terraced hillside overlooking the garden, home to Bieke Burwell, his eco-culinary accomplice. Owner of MIX Garden, a landscape design company in Healdsburg, Kopetsky also supplies organic, locally grown produce to a host of restaurants in Northern California’s Sonoma County. 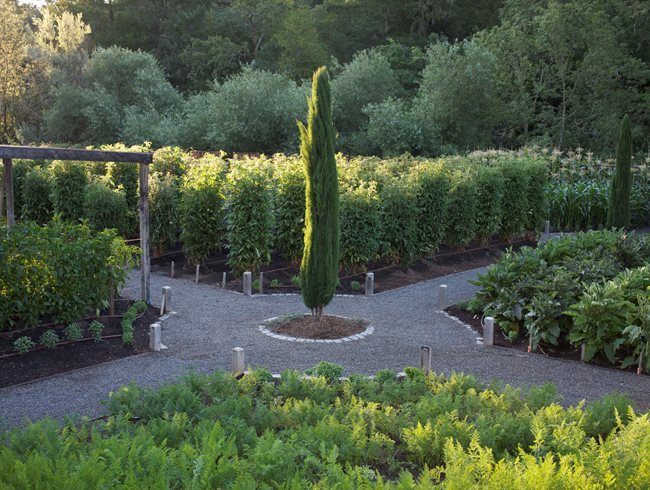 The roots of his collaboration with Burwell date back more than a decade, when Bieke and her husband, Brian, first bought the 28-acre property in the vineyard-rich Dry Creek Valley, west of Healdsburg, and were in the midst of construction. Kopetsky was working with the original landscape architect for the project, Austin, Texas-based James David, at the time and came on board to oversee the installation.

In keeping with the modern, clean-lined architecture of the house (designed by Richard Beard of BAR architects in San Francisco), the planting plan in Kopetsky’s hands has evolved into an understated mix of drought-resistant shrubs and grasses beneath a canopy of native oaks and Douglas firs. Steps chiseled from thick slabs of Lueders limestone wind through the hilltop gardens around the house, sneaking views of the valley of vineyards for which the Dry Creek region is known. A grove of Italian olive trees across the courtyard from the front door provides enough fruit to press and bottle 10 gallons of organic golden-green oil a year, and the Syrah grapes from a small vineyard are crushed into some of the best local reds in the valley. 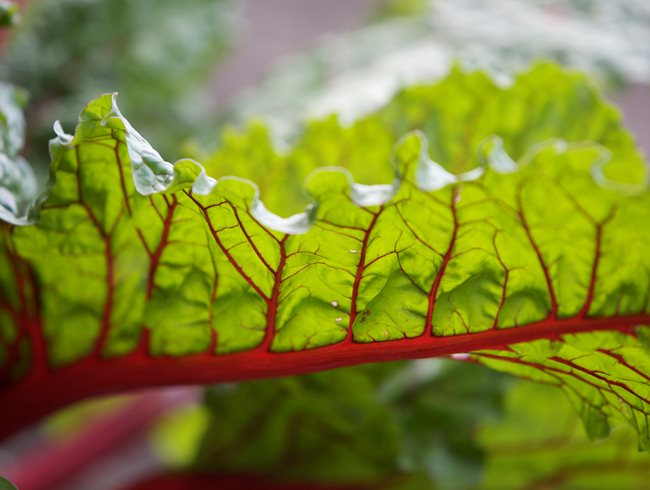 A leaf of Swiss chard backlit by the sun. The kitchen garden has been so fruitful that Kopetsky markets the extra harvest to local restaurants. Photo by: Barbara Ries.

With a hillside so steep and soil so rocky, a potager wasn’t even part of the original garden plan. But one afternoon, as Burwell and Kopetsky surveyed the property from the back terrace of the house, talk turned to their shared passion for food. Burwell’s eyes fell on a bare patch of soil at the bottom of the hill, next to the creek. “I’d love to grow white asparagus,” mused the Belgian-born cooking expert, “and endive.” Kopetsky had always wanted to try his hand at edibles, so they hatched a win-win plan. Burwell would pay for the drip irrigation system and infrastructure, and harvest whatever she needed; Kopetsky could test his green thumb however he wished, as well as do the maintenance, harvesting and selling of the extra vegetables. Little did either of them know that a few years later they would be the stewards of a plot so healthy and prolific that the asparagus and endive — not to mention the rapini flowers, fava-bean tips and heirloom tomatoes — would be sought after by the finest restaurants in the valley.

Though the decision to create a vegetable garden at the bottom of the hill was part happenstance, it turned out to be the ideal spot for the European-inspired parterre the two had in mind. Enclosed within a rustic wooden fence painted to echo the deep-purple trunks of the manzanita trees on the property, the formal geometry of the design is reminiscent of a 17th-century chateau potager. Vegetables mingle with herbs and cutting flowers in rows radiating out from a central pea-gravel pathway, with Italian cypress standing sentry at the axes.

Kopetsky starts everything from seed, most of them heirloom and open-pollinated varieties, including 50 kinds of tomatoes, 15 different lettuces and eight types of Italian eggplant, all carefully selected for their flavor as well as beauty. “Heirlooms help sustain garden biodiversity, and in my opinion, they just taste and look better,” says Kopetsky. Indeed, garden-variety vegetables don’t make his aesthetic or gastronomic cut. ‘Mammoth German Gold’ tomatoes are streaked with red, ‘Tendersweet’ watermelons open to reveal a deep-orange flesh, and the ‘Quadrato d’Asti Giallo’ bell peppers have walls so crisp and thick that each bite is almost thirst quenching.

Kopetsky refers to his chemical-free gardening practices as “clean,” a term sometimes used in the agro-ecology world to emphasize the environmental benefits of eating food that is local, seasonal and sustainably grown. He plants cover crops of fava beans to fix nitrogen in the soil, amends with organic matter every time he plants and gets down on his knees to weed by hand, though the efficient drip-irrigation system keeps invasive culprits to a minimum. 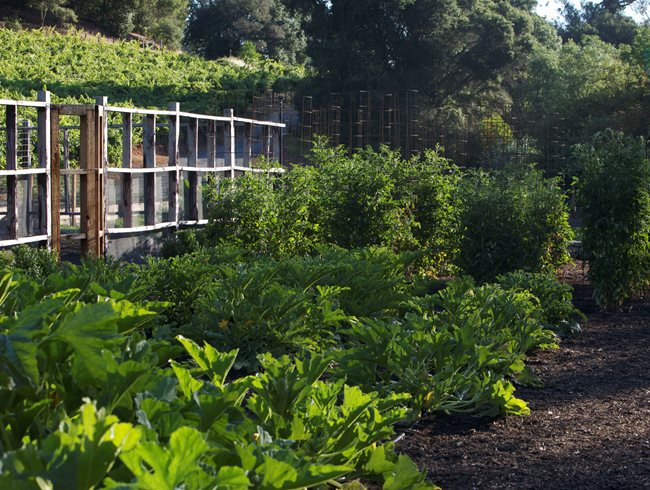 Frequent helpings of organic matter, including grape pomace, are the secret behind the potager’s bumper crops of summer squash and tomatoes. Photo by: Barbara Ries.

Their collaboration has proved so fruitful that Kopetsky was asked to design and tend kitchen gardens for several other families in the area, among them the owners of the Farmhouse, an accolade-winning restaurant, inn and spa in nearby Forestville. “I love the way Bieke’s garden has grown from a connection between two people with a passion for food to include the local community in such a healthy, sustainable way,” says Kopetsky.

As with the Burwell garden, he sells the extra bounty to more than a dozen local restaurants and caterers, including Dry Creek Kitchen, Scopa, Barndiva and Cyrus — all known for their emphasis on serving fresh, locally grown food. “Everything is picked the day it’s eaten, whether it’s going to Bieke’s kitchen or I’m selling it to a restaurant. Nothing travels more than 10 or 15 miles. Even when food is grown organically, if you truck it a thousand miles to a supermarket, you’ve pretty much wiped out the environmental benefits of it.”

Even before the first seeds were sown, Burwell told Kopetsky she also envisioned a labyrinth near the potager. The connection was natural in both of their minds. “The vegetable garden makes me acutely aware of the cycle of life and how the seasons follow a continuous path from birth to death to renewal,” says Burwell. She often invites guests to walk the one-fifth-mile path to the center of the labyrinth and back before dinner, while she whips up a bowl of her famous bean dip, made from the creamy heirloom ‘Marrowfat’ beans grown in the garden. “I find a beautiful symmetry between growing good, healthy food and walking through the labyrinth,” she says. “It’s like an appetizer for the soul, a nourishing of the spirit followed by the body.”

Soil: A healthy vegetable garden literally eats up good soil at a rate of approximately six parts soil to one part produce, which makes replenishing the soil an essential part of the sustainable growing cycle. Garden designer Mick Kopetsky recommends amending the soil with organic matter every time you plant. His mulch: a mix of rice hulls, cow manure, grape pomace and composted garden waste.

Seeds: Help preserve garden biodiversity by sowing open-pollinated, non-GMO heirloom seeds. Some heirloom varieties of vegetables and fruits have been around for centuries, and with good reason — they excel at putting flavor first. Take the next step in sustainability by saving seeds from the plants you grow for next season, or trade them with other gardeners through a seed-exchange program.

Stay Local: Find local sources to supplement what you grow rather than buying produce that has traveled long distances to reach store shelves. Look for a community food-exchange program, where you can swap your bumper crop of tomatoes for a neighbor’s fresh-picked corn; support growers closer to home by frequenting a farmer’s market or signing up for CSA (Community Supported Agriculture); or if you have space to grow vegetables but don’t have the time or know how, consider asking a garden pro to plant and harvest for you, like the fruitful relationship between Mick Kopetsky and Bieke Burwell.

For more information on sustainable food practices, heirloom seeds, or how to find local farms and events, check out slowfoodusa.org, seedsavers.org or localharvest.org.