In anticipation of Mockingjay, Part 2 opening in theaters this Friday, we pulled this article from our archives as a horticultural hat tip to Suzanne Collins and The Hunger Games trilogy. By Anna Laurent

“Plants are tricky. Many are edible, but one false mouthful and you're dead.” —The Hunger Games, by Suzanne Collins

Whether or not you've seen the movies or read the books, you probably know that The Hunger Games is a dystopian story of competition and survival in a post-apocalyptic world. Much of the narrative takes place in the wilderness, a setting that comes with its own cast of characters: plants. The book (not so much the film) is a wonderful collection of ethnobotanical references. Flowers that heal, trees that feed, and berries that kill—plants are the ally and the enemy.

Author Suzanne Collins considered the significance of the wild plant when she scripted a food-insecure world, and her characters are often defined by a plant—some can identify them (they live), others can't (they die). Collins has even named several major characters for plants that symbolize them. And, in the months since The Hunger Games premiered on screen, there has been a renewed appetite for foraging and wild plant literacy. A high school in Texas was inspired to introduce a course on plant identification and foraging, and there have been a number of Hunger Games-inspired recipes, many of which include plants mentioned in the book.

Without further ado, a list of several significant plants in The Hunger Games. To readers who aren't familiar with the story, two warnings: first, [SPOILER ALERT] the list contains some spoilers. Second, beware the deadly nightlock berry! 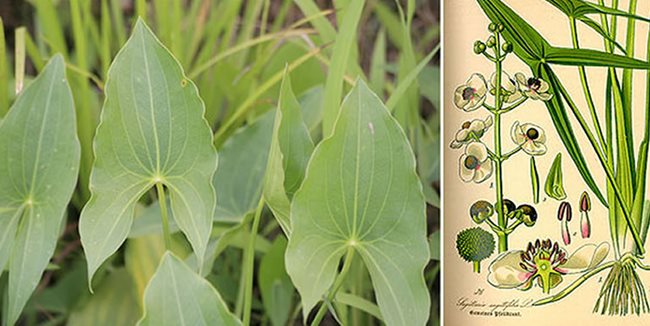 KatnissKatniss Everdeen, the story's heroine and champion forager is named for a plant. Hardy, valuable, and sometimes sweet, the katniss plant is also an adaptable survivor, just like the character. Also known as duck potato and swan potato, the plant is sometimes called "arrowhead," derived from the Latin name for its genus: Sagittaria, which refers to the archer in the zodiac—a master with the bow and arrow, just like the young protagonist.

In the wild, the katniss plant is found in wetlands. Its leaves are edible, though it's most valued for its roots: large, nutritious tubers whose taste is comparable to a sweet potato. Katniss was once a staple food of Native Americans, especially in the Northwest (where they dug up the plant with their toes). Of the 30 katniss species, Sagittaria latifolia is most prevalent in North America. 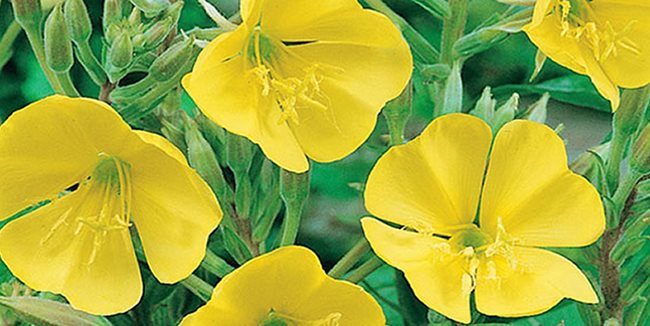 PrimrosePrimrose Everdeen, Katniss's gentle sister, is most likely named for the evening primrose, Oenothera spp, a plant that Collins describes as beautiful and delicate. Like the character, primrose flowers are not all that hardy—they're not at the Games either. The evening primrose is a medicinal plant, called "king's-cure-all, and a softening agent, both of which reflect Primrose's character in the story. The flowers will thrive in forsaken land, just like the young girl—except in regions west of the Rockies, which is where the story's "Capitol" is likely located—and also where the character herself dies. 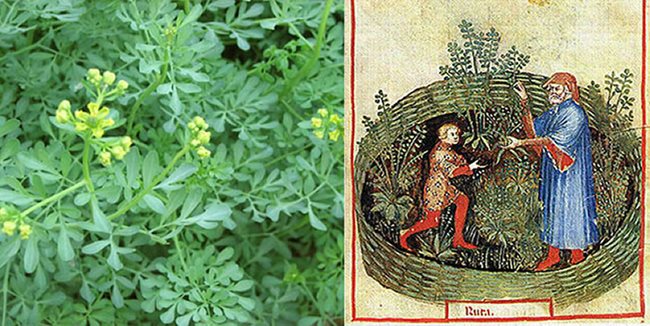 RueThe rue plant (Ruta) is an evergreen "herb-of-grace" that carries many metaphors. It's been called the plant of purity and it is featured in many cultural and religious ceremonies. In literature, it has been used as a symbol of both regret and freedom. And so it is an apt name for the young girl who befriends Katniss during the games, whose death serves as a turning point in the narrative. When Rue is killed, Katniss's regret becomes a sense of freedom, prompting her to launch the critical rebellion. 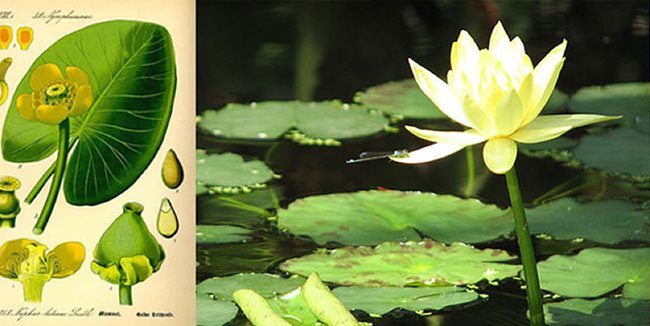 Pond Lilies"Tomorrow I’ll stay here, resting, camouflaging my backpack with mud, catching some of those little fish I saw as I sipped, digging up the roots of the pond lilies to make a nice meal."

Katniss's survival plan sounds very pleasant—a picnic by the lily pond. Collins does not mention the species, so the lilies of The Hunger Games could be any species of the most common three genuses—Nuphar, Nymphaea, and Nelumbo, all of which have edible rhizomes. Pond lily roots are enormous, spongy, and sold in many street markets (think of the lotus root, which the Chinese call a "cooling" food, thought to restore balance in the body). 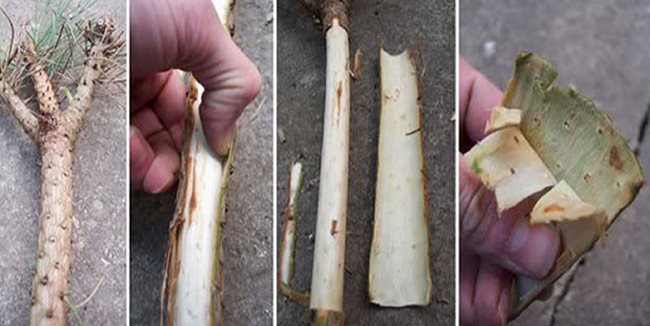 Pine Trees“I slowly chew the stuff as I walk along ... it’s a little hard to choke down.”

With little else to eat, Katniss turns to a pine tree. Its soft inner bark can be a good meal and its needles are a good source of Vitamin C. Native Americans often chewed on pine tree bark during the winter months to conserve food reserves. 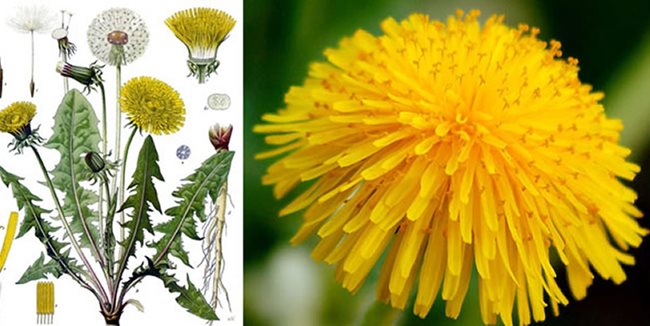 Dandelions"I had just turned away from Peeta Mellark's bruised face when I saw the dandelion and I knew hope wasn't lost. I plucked it carefully and hurried home. I grabbed a bucket and Prim's hand and headed to the Meadow and yes, it was dotted with the golden-headed weeds. After we'd harvested those, we scrounged along inside the fence for probably a mile until we filled the bucket with the dandelion greens, stems and flowers."

In the story, the dandelion becomes a symbol of hope for Katniss, and evidence of her resourcefulness and expert foraging. When she sees the field of dandelions, she gains confidence in her ability to feed her family. Dandelions are entirely edible—to a forager, a dandelion field means something entirely different than what it means to the gardener. Dandelion leaves have more beta carotene than carrots and more iron than spinach. The root can be applied as an herbal remedy for a number of ailments and the milky sap can soothe bee stings and blisters. 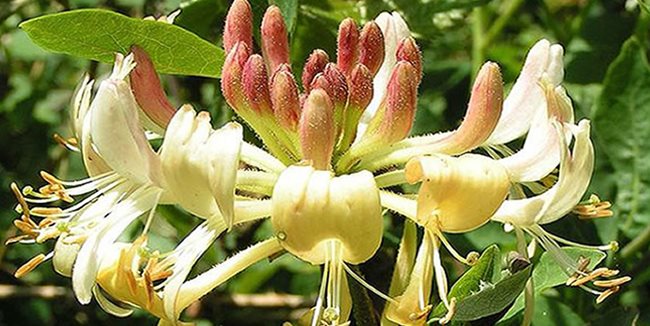 HoneysuckleWhen Katniss emerges from the tracker jacker (engineered wasp) hallucinations, she reaches for a honeysuckle to soothe her spirits and sweeten her tongue. The edible nectar can be eaten directly from the flower—remove the stamen from the bottom of the flower, and suck the nectar droplet. 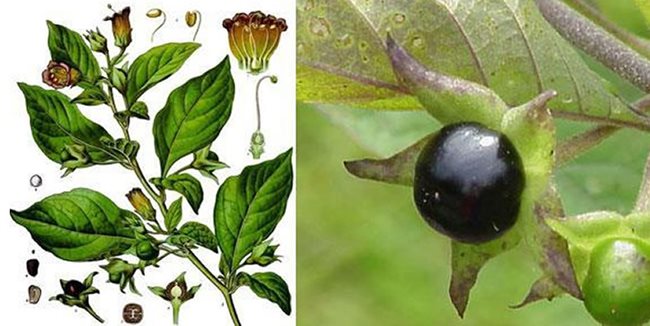 NightlockNightlock, the poison of the forest, doesn't actually exist, but its name is most likely derived from two living plants with similar toxicity: deadly nightshade (Atropa belladonna), and poison hemlock (Conium maculatum). Ancient Romans used the nighshade's berries and leaves as a poison, and hemlock was famously used in the death of Socrates. In The Hunger Games, Katniss accurately identifies some berries that Peeta collects to be deadly. A competitor who doesn't share Katniss's plant identification acumen later eats the nightlock's berries, with fatal consequences.

UnidentifiedCollins writes about one plant whose identity eludes us. The leaves of an unnamed plant are used several times to heal various wounds and ailments: in one instance, Rue chews the leaves, then applies the pulpy salve to Katniss's tracker jacker wounds; in another, Katniss's mother boils the leaves to make a medicinal elixir; finally, Katniss uses the leaves to treat Peeta's leg wound. It's possible that the plant is Calendula officinalis, which herbalists often laud for its beneficial tinctures, tea, and oil. Calendula leaves and petals have been applied to reduce inflammation and as an antiseptic against infection. Calendula is a good candidate for this unnamed plant, but it's hard to be sure. Hunger Games fans, what do you think it could be?

Thanks to Peter Schafran, ethnobotanist at Old Dominion University, for consulting on this piece.