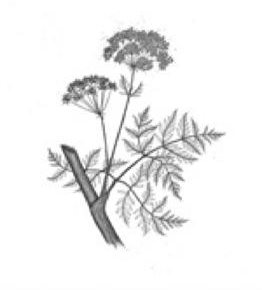 Much has been written of plants we love - roses and jasmine, Italian herbs and heritage apple trees - but what about the plants that give us cause to fear? I personally love a plant with a checkered past, a rap sheet, a dark secret. When I stumble across one of these evildoers, I'm always tempted to sidle up alongside them and whisper, "They say you killed a man." There's nothing like a good villain. Here are some of the most notorious criminals in the plant kingdom.

Strychnine Tree (Strychnos nux-vomica): A 50-foot-tall tree that favors the tropics. The seeds contain strychnine, a nasty poison that goes to work on the nervous system, flipping switches that deliver an unstoppable river of pain. Favored by a 19th-century serial killer named Dr. Thomas Neill Cream, who slipped it to his patients. Poor dears.

Poison Hemlock (Conium maculatum): Socrates might be this plant's most famous victim, but I like the description by Nicander, a Roman doctor who recounted its effects in about 150 BC. "This drink assuredly looses disaster upon the head bringing darkness of night? for a short while the victim draws breath like one swooning, and his spirit beholds Hades."

Oleander (Nerium oleander): A common garden shrub in warm climates, but don't let that reassure you. A woman is doing time on California's death row right now for murdering her husband: She started with oleander and finished the job with antifreeze.

Death Cap Mushroom (Amanita phalloides): Okay, it's not a plant exactly. But this pale little fungus is responsible for about 90 percent of all mushroom fatalities worldwide. Only a lucky few get a liver transplant in time to save their life.

Wormwood (Artemesia absinthum): This ne'er-do-well stands falsely accused. While the fragrant herb is used to flavor absinthe, it's not fair to blame the drink's maddening powers solely on wormwood. As a 130-proof spirit, absinthe is more than twice as alcoholic as gin or vodka, making it lethal all by itself.

Calabar Bean (Physostigma venenosum): Dr. Livingstone, I presume? The famous explorer reported that this bean was used in Africa to dispense justice: If it killed you, you were guilty, and if it didn't, you must be innocent. Sounds fair, right?

Death Camas (Zigadenus venenosus): Speaking of explorers, one historian believes that members of the Lewis and Clark expedition might have eaten this bulb by accident, mistaking it for an edible look-alike. They were sick for weeks, then struggled on through a miserable winter.

Opium Poppy (Papaver somniferum): Die-hard gardeners grow this flower with impunity (though it's illegal) - but don't forget that heroin has claimed the lives of Billie Holiday, Janis Joplin, Dee Dee Ramone and countless others.

White Snakeroot (Eupatorium rugosum syn. Ageratina altissima): The weed that changed the life of the man who changed our lives. Abraham Lincoln was only 9 when his mother died of milk sickness, an illness caused by drinking the milk of cows that have grazed on this poisonous plant.

Monkshood (Aconitum napellus): The leaves bear a striking resemblance to parsley, and the roots have been mistaken for horseradish. Nazis used it as an ingredient for poisoned bullets. You should wear gloves around it in the garden.