The poet Hart Crane once called air plants, or tillandsias, a genus of the bromeliad family, an "inverted octopus with heavenward arms." Needing no soil, these amazing plants come in a variety of fantastic shapes and colors. By Melissa Ozawa

How to “Plant” Air Plants

Tillandsias may free you from the constraints of pots and soil, but that leaves the question of how to display them. With suggestions from breeder Paul Isley, who has grown air plants for more than 30 years, we offer three options: 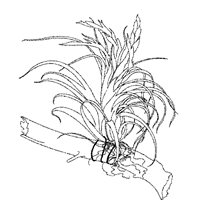 1. Mounting: Use floral wire to fix the plant onto a branch, fence slat, or section of tree bark. Hold the base of the tillandsia against the object and secure it there by weaving the wire through the plant leaves and around the base several times. 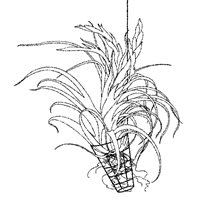 2. Hanging: Take wire that’s flexible but sturdy and custom design your own planter. Make a loose basket or spiral shape to hold the plant, and at the other end of the wire, create a hook for hanging it. 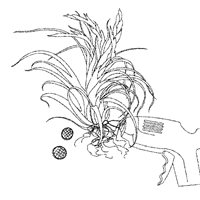 3. Velcro: With a hot-glue gun that has cooled briefly, attach one half of a Velcro dot to the plant’s base and the other half to the wall. This makes it easy to remove the plant for watering.

Tillandsias—an epiphytic genus commonly known as air plants—are no ordinary plants. Bulbous, feathery, or spiky—the poet Hart Crane called one an “inverted octopus with heavenward arms”—they make their home above ground, suspended in the air among trees, cacti, and rocky outcrops. Found throughout the Americas, tillandsias comprise the largest genus of the bromeliad family, with more than 450 recognized species, including the ethereal Spanish moss (Tillandsia usneoides), which drapes from the branches of live oaks in the Southern United States. They put down no roots in the soil and receive nutrients and moisture through their leaves. The plants range in size from three centimeters to five meters, and have leaves of silver, green, and even rusty red. They produce dramatic inflorescences in shades of purple, red, pink, green, and yellow. Many are fragrant, such as T. crocata, a small, clumping species with a honeysuckle-like scent, and T. duratii, which flaunts exceptionally fragrant and long-lasting purple flowers. Once it blooms, a tillandsia begins producing offshoots called pups that become new plants in one to two years.

While tillandsia look extraordinary, their care is anything but. Paul Isley III finds them highly adaptable: “They are low maintenance,” he says, “and thrive under a broader range of conditions than almost any other type of plant.” They can tolerate temperature extremes and will survive a long time without any attention at all but are happiest in locations of 70 to 80 degrees Fahrenheit with good air circulation and bright indirect light. Run the plants under the faucet a few times a week (if you have hard water, use filtered). Let the leaves be your guide. If they’re curled more than usual, the plants  need water: submerge them in a bowl of water overnight. Isley also suggests using epiphyte fertilizers since other types are designed to release their nitrogen nutrients only after interacting with soil.

Tillandsias flourish both indoors and out, and landscape architect Joseph Marek is so smitten with the genus that he has placed it throughout his Santa Monica, California, garden. “I think of them as garden ornaments,” he says. “I put them on tables in place of cut flowers or potted plants. They’re almost like jewelry.” Despite having run out of ground space, Marek realized he didn’t have to stop adding new plants: he could just go up. He mimics the plants’ natural environments by tucking them into the crooks of trees, mounting them on walls, and hanging them by wires, creating striking living mobiles. Since they’re not planted in the ground, air plants offer design flexibility and can be moved around. “They’re the original vertical garden,” Marek says. Onward and upward! 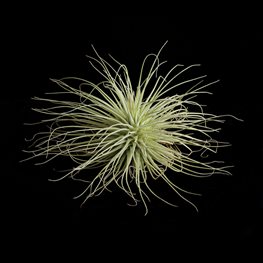 T. fuchsii is an exquisite and refined species that looks fragile but is quite hardy. The silvery leaves of the plant arc outward from the base. 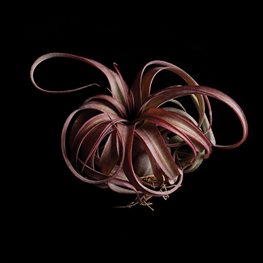 T. ‘Eric Knobloch’ grows to only eight inches, and its leaves turn a frosty rose just before the plant blooms. 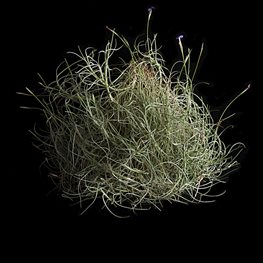 T. mallemontii is a miniature species with fragrant blue flowers and a clumping habit. It prefers the outdoors. 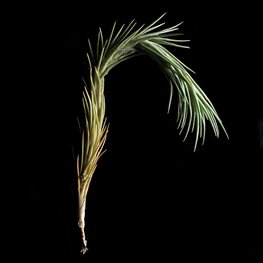 T. tenuifolia ‘Silver Comb’ has leaves that grow along a stem that can reach two feet before the plant starts to form a clump. This cultivar tends to dry out quickly. 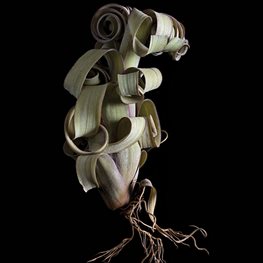 T. ‘Curly Slim’ can grow to more than two feet. It has a wonderful form, with wide leaves that resemble banana peels. Offsets will occasionally branch off from the main plant. 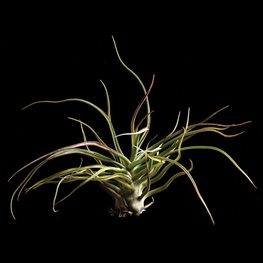 T. ‘Showtime’ is prized for its thick stems and symmetrical clumps. 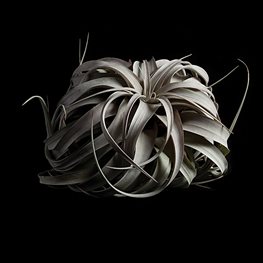 T. xerographica is the king of all air plants with its silvery gray leaves. It grows slowly but eventually will reach 18 inches in height and 15 inches in diameter. 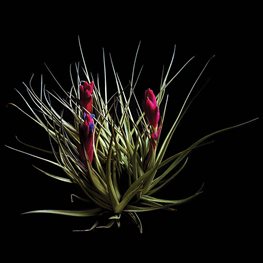 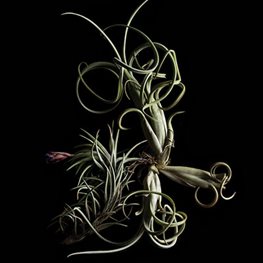 T. neglecta has thick, succulent leaves and is known for producing many offsets from its main stem. 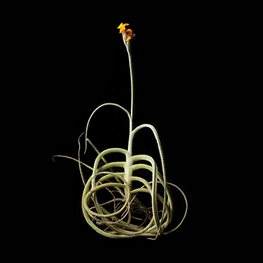 T. intermedia is unusual in that it produces pups at both ends of the plant. T. crocata is easy to grow and produces tiny yellow flowers with the most delightful fragrance of any Tillandsia.

ABOUT PAUL ISLEY IIIPaul Isley III is a man in love with a plant. In Brazil, he risked his life for tillandsia, he has trekked across Argentina, Mexico, Costa Rica, Guatemala, and Ecuador to collect it, and has spent decades in the United States propagating it from seed. The co-owner of Rainforest Flora now possesses millions of them, ranging from seedlings the size of pencil erasers to full-grown plants. When asked what fuels this passion, Isley replies, “They are like nothing else.”

Editor's Note: This article was adapted from its original version for use on the web.

Melissa Ozawa is a writer in New York City who also works for the Garden Conservancy.