Scott Shrader has mastered the art of crafting classic gardens that feel timeless. Behind his own home, he makes small spaces feel expansive, erasing the boundary between inside and out. By Susan Heeger

Around Southern California, landscape designer Scott Shrader is known for civilized, amenity-filled gardens tailor-made for life outside. From luxe-Malibu ranches to celebrity retreats (Cher’s and Lionel Richie’s are two), Shrader’s hangouts make houses seem almost superfluous. Cushy and sheltered, they’re humanly scaled, even across expansive tracts. In a region famous for novelty and impermanence, his designs feel timeless, melding elements of history along with a deep sense of the land and its climate. They’re inviting and they get used—which, Shrader would say, is their reason for being. 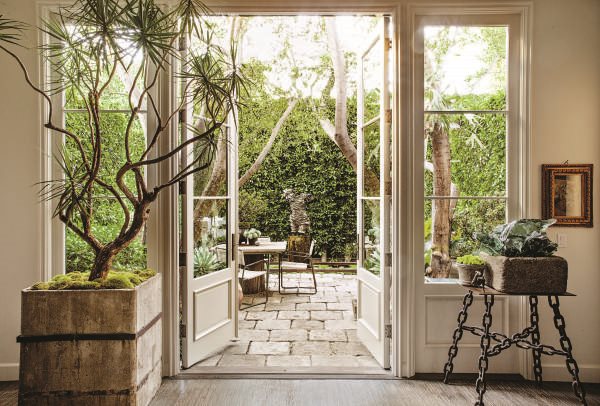 Long fascinated by plants and good design, Shrader grew up in coastal Palos Verdes, California, the son of an orthopedic surgeon who also raised oranges and kept bees. Given his own outdoor-focused youth, Shrader went stir-crazy in his first job as an analyst for a bank. He studied landscape architecture, and after a five-year stint at a residential design firm, he went solo in the late ’90s, specializing in outside spaces closely linked to clients’ homes.

At his own home—a 1,600-square-foot Regency-style cottage in West Hollywood—Shrader transformed a cramped, 24-by-45-foot brick-and-concrete backyard (which gawked at neighbors through spindly cypresses) into three intimate rooms. This alfresco world apart, which has hosted groups of 60 guests, is laid out along the lines of all his gardens: to echo and expand the house; to draw Shrader and his partner, Mark Hemphill, outside in all seasons; and to serve as a lounging and dining playground for their party-happy pals. Garden Design sat down with Shrader to find out how he did it.

Garden Design: Why did you, a garden pro, choose a house with such a tiny yard?

Scott Shrader: I’m out every day, busy on jobs, and I don’t have time to manage much space for myself. But I saw how I could take this small house—which had a good plan and 11-foot ceilings—and pop in big French doors to open its rooms to the outside. By dividing the garden into corresponding outdoor rooms, I could give both inside and out more purpose and make everything feel larger. 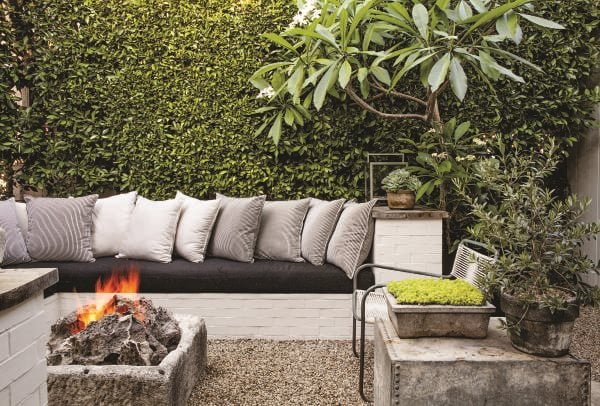 A seating area of the garden is built from brick to match the house. The fire pit was made from stone taken from an abandoned well in France. The side table, an upside-down metal planter, was salvaged—on top of it is an olive bonsai tree in a vintage orchid pot. In the upper-right corner is plumeria, and the hedging is Ficus nitida. Photo by: Lisa Romerein. SEE MORE PHOTOS OF THIS GARDEN

GD: Where did this particular makeover begin?

SS: The same way you do rooms in a house: with different details and furnishings, so everyone doesn’t congregate in one place. Off the living room, where I have the outdoor dining table, I used 200-year-old Guatemalan pavers and put in a pond with a fountain and sculpture as a focal point. I set off the side rooms with gravel carpets, and, in one, I designed a built-in banquette (in the same white brick that’s on the house) around a fire pit. In the other, I put a steel table that holds plants but doubles as a bar for cocktail parties. Olive trees mark the transitions from space to space and add shade and places to hang lights. One big challenge once you get people outside is getting them to stay—which you do by keeping them cool enough, warm enough, hydrated, and fed.

GD: What was your strategy when planting?

SS: The hedges were starting points. They were the crisp green backdrops I played off with the silver-leaved olives and various greens of tough succulents that add extra layers and look good all year. I don’t have space or time for anything fussy, so I use container plants, not flowers, for accents. I move big-leaf begonias in and out of the house, and I bonsai cast-off or neglected plants I find in nurseries—like the dwarf rhaphiolepis I rescued, root-pruned, and repotted, which should be blooming by spring. For seasonal change and to grow food, I have a raised bed outside my office, where I have grown kale, winter lettuce, and wheatgrass for blender drinks. 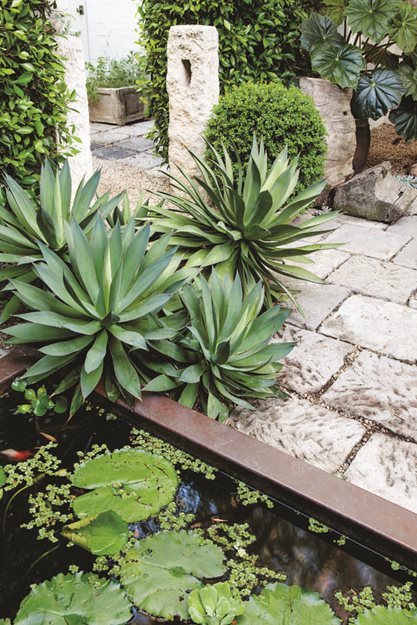 Agave ‘Red Margin’ border the water feature, which is made from sheet bronze. The stone element in the background is a reclaimed French post, juxtaposed on its right with a boxwood globe and a wooden seat. The large-leaved Begonia ‘Lotusland’ is a prized possession; it was hybridized by Rudy ­Ziesenhenne for Madame Walska, the founder of the Lotusland garden, and has been in Shrader’s ­collection for over a decade. Photo by: Lisa Romerein. SEE MORE PHOTOS OF THIS GARDEN

GD: What’s behind your disciplined editing of color and furnishings?

SS: I’m not a fan of filling space with stuff you’re just going to get rid of later. I waited to buy until I found what I liked: bits of old reclaimed stone, wood, and metal, beautiful in their imperfection. Natural materials with patina add contrast to the modern elements. I also looked for furniture that won’t go out of style, like the classic Walter Lamb rope-and-copper-tube chairs I found through Modern One. They work without cushions, which cuts down on maintenance. Where I needed upholstery, I used outdoor fabrics in light neutrals that are calming against the green. When they get dirty, I soak the covers overnight in OxiClean.

GD: How did you cut corners so you could splurge on pricey furniture and stone?

SS: I prioritized, putting money into structure—trees, paving, the pond-by buying long-lasting fabrics that wouldn’t need replacing, such as Perennials and Kneedler-Fauchère. I used the stone sparingly and in two rooms substituted gravel. It holds weeds down, keeps moisture in, and makes everything, including the planting beds, look finished. Scaffolding wood was another quick, cheap fix for my dining tabletop, a shelf for guests to put drinks on, and as camouflage for an ugly wall—there, I filled scaffold frames with firewood.

GD: What’s your advice for creating a timeless garden?

SS: Plant mindfully. Anticipate the mature shapes and sizes of your choices so you’re not constantly redoing things. Landscapes change so dramatically that what you plant today could look totally different in three years.