A weed-covered lot in Southern California, owned by Caltrans, is completely redone by a couple who live adjacent to the garden, complete with native varieties, a citrus grove, and hundreds of new plants, creating a Mediterranean idyll.

This 3-acre property in Pasadena, California, was transformed from a mess into a beautiful garden by Betty and Charles “Kicker” McKenny who live in a townhouse adjacent to it. 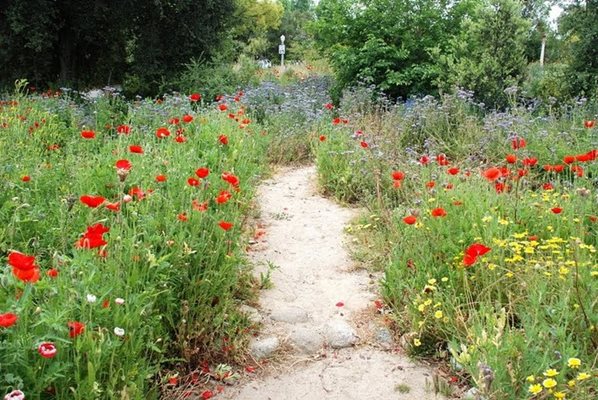 Once a weed-covered lot in Southern California, owned by Caltrans, this property was completely redone by a couple who live adjacent to the garden, complete with native varieties, a citrus grove, and hundreds of new plants, creating a Mediterranean idyll. Photo by: Betty McKenney.

Originally purchased by Caltrans for building a freeway, the property had become a weed-covered abandoned lot. In 2003, the City of Pasadena and Caltrans began to think about a new way develop the lot. Betty McKenney suggested a garden and eventually, the city and Caltrans agreed. (McKenney adds that it probably helps that her husband, Kicker McKenney, was a former councilman for the district in the 1970s.) Together, Betty and Charles McKenney, the City of Pasadena, and Pasadena Water & Power, combined to create Pasadena’s only dedicated public garden on property leased by the City from Caltrans. 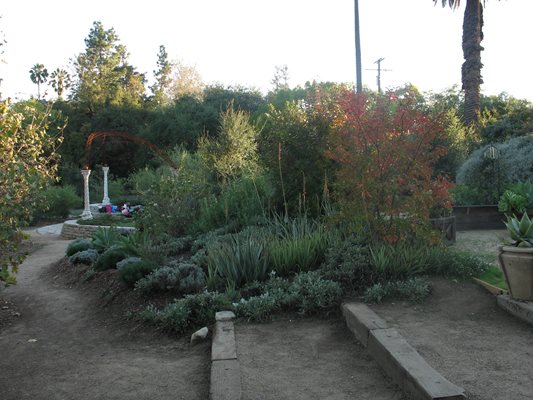 Betty and Charles McKenney spearheaded the creation of the garden, which was planted during the summer of 2005. Photo by: Betty McKenney.

Through substantial fundraising efforts—with about $15,000 raised each year from donations and events—and grants from the city and Caltrans, the McKenneys have a budget of about $45,000 to $50,000 per year, for the garden. And the McKenneys, who are retired, now spend about two to three hours in the garden each day during the summer and five to six hours each day during the fall through the spring.

They have a team of approximately six to seven volunteers who help in the garden, as well some college students who are paid to help maintain the garden. Betty calls the garden her "full-time hobby" and the couple's website, Arlington Garden, is a comprehensive showcase for their garden, including an iPhone app developed by their son. 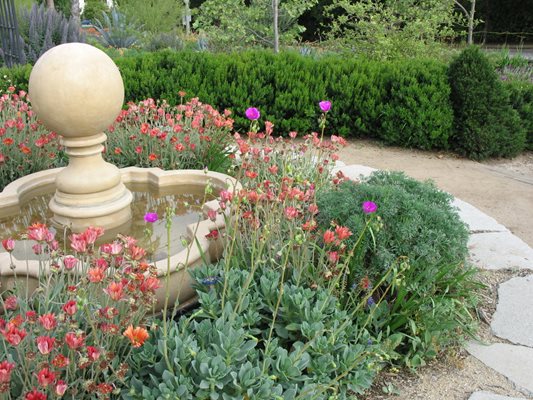 A fountain adds to the tranquilty of the garden, creating a quiet spot within an urban setting. Photo by: Betty McKenney.

How long have you had this garden? How long did it take to get it to its current state?We started with a 5 year lease in December of 2003 and did preparation and planning until we started planting in July 2005. 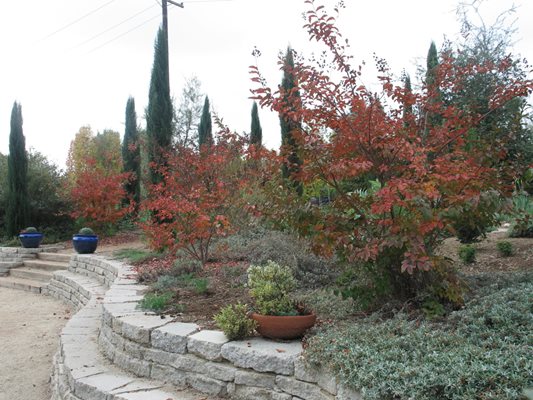 How would you describe the style of your garden?It is a Mediterranean climate garden appropriate for our area. It consists of 25 to 30 "rooms" where people can come and enjoy nature, learn from our ideas, picnic and enjoy the tranquility of nature in our urban setting.

The garden's mission is to illustrate the beauty and efficiency of a water-wise garden living in harmony with our Mediterranean climate. Photo by: Betty McKenney.

Did you work with a landscape architect or designer?We worked with Mayita Dinos, a landscape designer. She was referred to us by Jan Smithen, the author of Sun Drenched Gardens: The Mediterranean Style. We have also partnered with Marco Barrantes of La Loma Development Company, Inc., who produced all of the hardscape in the garden with recycled concrete "urbanite." Barrantes has a Masters in Landscape Architecture and Masters in Environmental Planning. 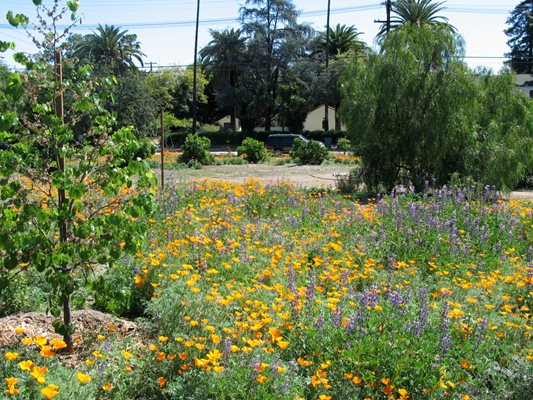 Wildflowers blooming in the garden provide lots of color and seasonal interest. Photo by: Betty McKenney.

What was most important to you when you started planning your garden? Did you have a philosophy or mission statement in mind when planning it?The emphasis was on drought-tolerant plants and trees.

Our mission is to develop, operate, and care for Arlington Garden to illustrate the beauty and efficiency of such a water-wise garden living in harmony with our Mediterranean climate; to present Arlington Garden as a public botanic garden that promotes the art, enjoyment, and knowledge of horticulture; and to provide a place for serenity and quiet enjoyment in our urban setting. 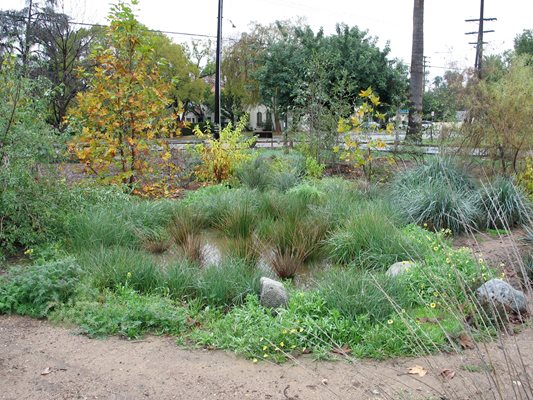 A vernal pool, which is wet during the rainy season and dry most of the summer, provides habitat for animals and insects. Photo by: Betty McKenney.

Does it have any unusual qualities, such as green gardening techniques, rare plants, or a unique location? Yes, we have intentionally planted rare and endangered plants and trees, especially the ones identified as important in Pasadena. We have a vernal pool (shown above), an orange grove, a desert area, low-water irrigation, solar powered fountain, and valve controller. 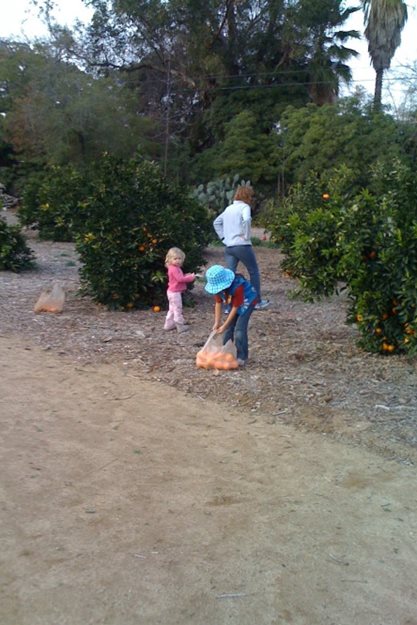 An orange grove produces citrus that is used to make marmalade. Photo by: Betty McKenney.

Do you grow any vegetables or fruits?We have a citrus grove (shown above) and we sell our sweet orange marmalade made by E. Waldo Ward & Son, Inc. in Sierra Madre to raise money to maintain the garden. 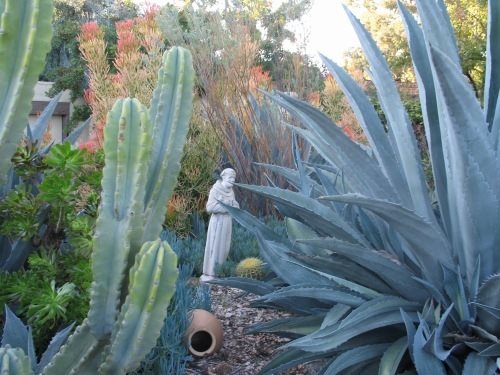 Knife leaf acacia, Peruvian Apple Cactus, and sticks of fire surround a small statue of St. Francis in the northwest corner of the garden. Photo by: Betty McKenney.

Any particular challenges with this space? How did you address them? We had plenty of challenges, including with the runoff of water. We started with 12 trees and 3 acres of weeds that had been neglected for 40 years. We now have close to 350 trees and several hundred Mediterranean climate plants and what rain water we get stays on the site. 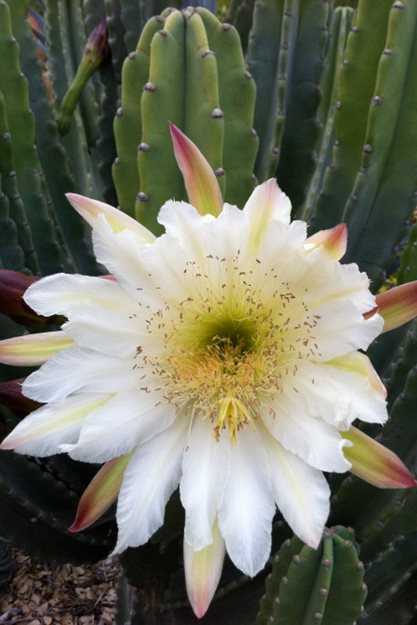 A Peruvian Apple Cactus flower is just one of the many of hundreds of new plants in the garden. Photo by: Betty McKenney.

Do you have any favorite plants in the garden?The native plants were totally new to me and I love how beautiful the native plants are. I particularly like Texas Ranger, Teucriums, and Penstemon spectabilis. 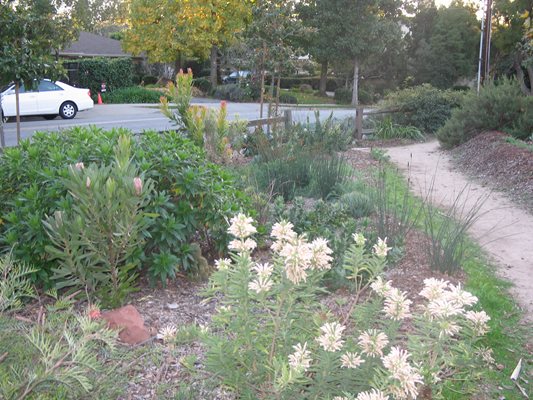 In this garden "room" that is referred to as a South African Fynbos, characteristic plants such as Proteas, Gladiolous, and Leucadendrons thrive, since they are not only drought tolerant, but bloom in the winter for much needed color. Photo by: Betty McKenney.

Any lessons from your garden?We think our garden is so appropriate for these times of expensive, limited water and a source for green ideas and using native plants and trees. 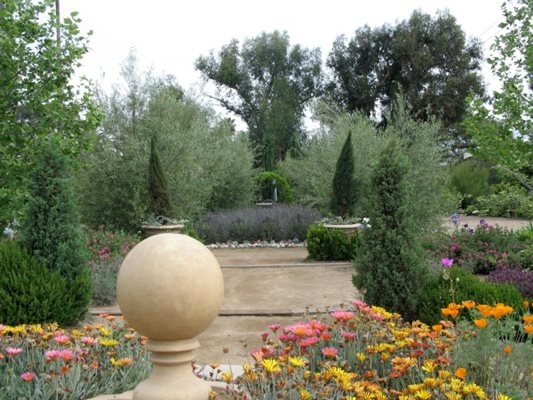 Now in retirement, the McKenneys spend much of their time caring for the garden. Photo by: Betty McKenney.

How do you think this garden reflects you and your family? We have volunteered our time for seven years and all of our adult children have contributed their time and talents as well.

One son is a general contractor and built a wonderful garden shed. The other son is helping with the website and plant database. And our daughter designed our wonderful business cards, being an expert in stationery. Grandchildren have helped plant bulbs and succulents.

We all enjoy seeing people come to visit the garden and leave refreshed and surprised by their experience.