A Star Is Reborn

When Marg Helgenberger, the longtime star of CSI: Crime Scene Investigation, was shopping for a new home five years ago, she found the perfect place in the Los Angeles neighborhood of Brentwood—but the gardens were overgrown and needed to be rethought. Architect Barbara Schnitzler, interior decorator Maggie Marra, and plant consultant Judi Bloom helped Helgenberger transform the property into a stunning Mediterranean-style house and garden. By Debra Prinzing

Hollywood notables judge real estate by three qualities: privacy, privacy, and privacy. When Marg Helgenberger, longtime star of CSI: Crime Scene Investigation, shopped for a new home five years ago, she found her sanctuary in a Spanish-Mediterranean revival on a corner lot in the Los Angeles neighborhood of Brentwood. Landscaping enveloped three sides of the property, with elderly ficus trees on the front and north sides. At the back of the house, a columned loggia afforded a sequestered entertaining space. Big enough to accommodate her teenage son and his friends, plus the family dog, the house “had good bones and a great vibe,” says Helgenberger. 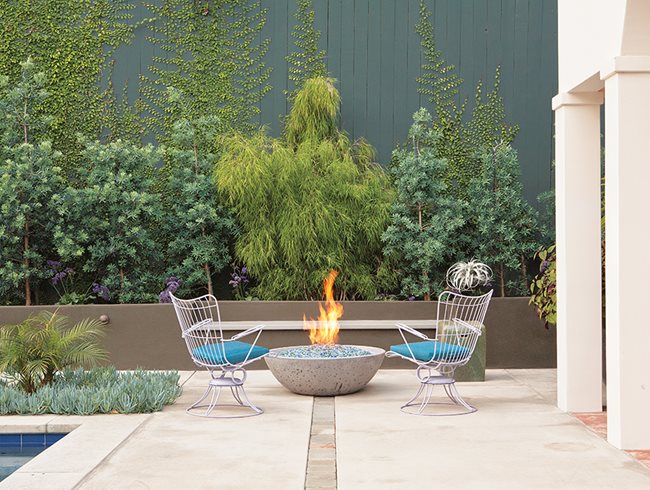 But after renovating inside, Helgenberger began to look more closely at the grounds. The ficus’ aging tangle of limbs felt oppressive. The backyard, she recalls, “had suffered years of neglect, not to mention mismatched hardscaping.” A 20- by 40-foot swimming pool dominated the south lawn. Even in Los Angeles, there’s such a thing as too much glamour.

Helgenberger went back to her friend Barbara Schnitzler, an architect with the New York design firm Dell Lane, who had handled the interior renovations. “Barbara understood the space, what my needs are, and how I spend my days,” Helgenberger says. Since Schnitzler and her interior-design partner (and sister) Maggie Marra are on the East Coast, they tapped Judi Bloom, a plant consultant based in Santa Monica, to round out the team. Their goal was to maintain the house’s privacy while making the outdoor areas more functional.

As a practical matter, Helgenberger also wanted her garden to be low maintenance and drought tolerant. Inspired by the Mediterranean architecture with its Moorish elements, she asked for some gravel, a small area of lawn, a fountain, some olive trees, succulents, lavender, and roses for cutting. 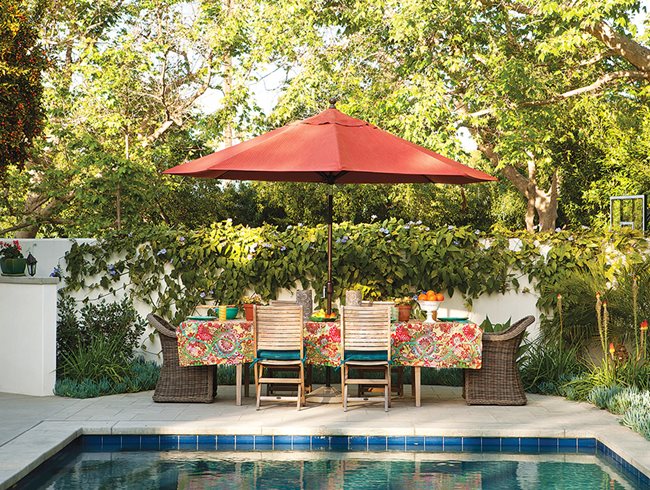 Schnitzler suggested they begin by narrowing the pool by 8 feet, creating 300 extra square feet of terra firma that now accommodates a built-in barbecue and a kitchen garden. On the pool’s west edge, a new pool house with a tiled roof and arches echoes the style of the main house. A sheltered outdoor seating area, nicknamed “the casbah” for its exotic atmosphere, is a favorite casual hangout spot. Just outside, a small patio, anchored by a gas-fueled fire bowl, provides a focal point for the garden.

Linking the pool house to the main house’s columned loggia is a 60-foot concrete path with a band of square stones inset along its center. The walkway, which starts at the fire bowl, becomes a rill during California’s rainy season. “I love the connection between fire and water,” says Helgenberger. “It’s very poetic.”

Close to the house, Schnitzler and her team updated a fountain and added a new patio to create a courtyard just outside the loggia’s portico, shaded by an existing California pepper tree and a magnolia. A dazzling array of colorful succulents occupies a large half-circle planting bed. “The white arches frame this succulent explosion,” Bloom says. “It’s like a little garden stage.” Splashing water from the two-tiered fountain, the fragrance of citrus and aromatic herbs, and the intricate, jewel-like details of the succulents unmoor the courtyard from its Los Angeles backdrop. This secluded paradise could be in Spain or Mediterranean Africa.

The lush, green-gray and gray-blue foliage deepens this impression. In the pool area, Bloom planted Pygmy date palms with a carpet of blue-green Senecio vitalis underneath. To disguise the neighbor’s fence, she installed a podocarpus hedge on the slope above the pool. The calming palette throughout the property softens the home’s imposing scale, an effect Bloom supported by keeping the overall look tidy and modern. “Marg’s style is a little traditional, a little modern,” Bloom says. “I tried to translate that into the planting scheme—not fussy, but as simple as possible.” Low-slung, vintage patio furniture extends the theme. 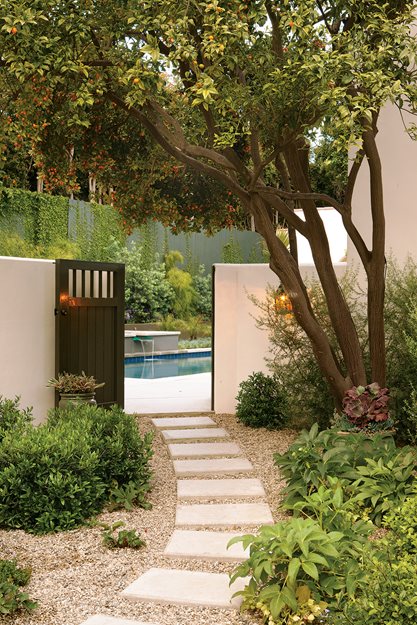 As private as her garden is, Helgenberger relishes how the space opens up for entertaining. “I do big parties well,” she says. “If I have 75 or 80 people here, they have plenty of places to sit, one completely different from the other. They can gather by the fire pit at the casbah or at the picnic table near the barbecue. I put tables and chairs on the grass, and people love sitting there.” After Helgenberger got a star on the Hollywood Walk of Fame in January, she celebrated with friends at the house. “It rained, but it didn’t matter because people hung out in the loggia, where I had the bar,” she says. Out front, a 5-foot bay laurel hedge replaced the ficus trees—tall enough to screen the entry court from the street but low enough to admit ample light. The hedge contains a new, gravel-paved formal landscape with a raised 12- by 14-foot parterre and a second fountain. The gravel is a mix of cream, tan, and gray that harmonizes with the home’s bright facade. It’s an ideal medium for drought-tolerant drifts that include ‘Little Ollie’ olive shrubs, Pittosporum tenuifolium (kohuhu), and huge agaves that Bloom transplanted from the garden at her beach house in Santa Monica.

Guests arriving for one of Helgenberger’s events now enter via a long walk-concrete poured in a pattern that resembles stepping stones-flanked by stands of fruitless olives (‘Swan Hill’) and fruit trees, including two lemons and a fig. For a Hollywood crowd, it makes for a dramatic entrance, but Helgenberger enjoys it equally when home alone. “I love sitting in the living room and looking through the window onto the layers of foliage,” Helgenberger says. Now that’s enjoying your privacy. See a slideshow of all photos here.