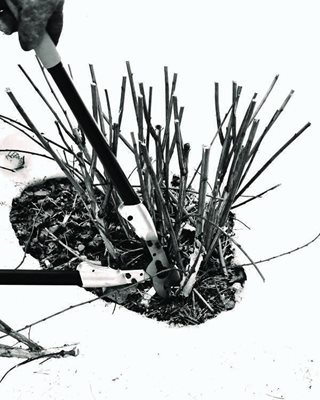 Flowering shrubs and small trees are a staple of most garden designs, as they provide height, structure, screening, and year-round interest. However, integrating these woody plants with perennials and annuals can be challenging because, over time, they will overtake their herbaceous neighbors. At Coastal Maine Botanical Gardens, where I am executive director, one technique we use involves managing smaller woody plants much as we do perennials: cutting them back severely every one to five years (the frequency depends on the variety). This approach results in plants with more of a multistemmed, “perennial” character that do not crowd their neighbors but do produce more flowers and better foliage than their unshorn brethren.

Though the practice of cutting back certain woody plants, such as roses, butterfly bushes, and lavender, is widespread and familiar, many gardeners are intimidated when it comes to pruning stems on other shrubs and trees to within 6 to 18 inches of the ground. However, the process is relatively foolproof if you follow a few basic rules.

When you cut a rose for a bouquet, a dormant bud just below the cut will begin growing and eventually develop new blooms. Light pruning such as this, where you cut back younger stems (less than two years old), can be done on just about any woody plant at any time of the year, more or less, except later summer. However, when more extensive pruning is required, timing and technique are more crucial. Without getting deep into plant physiology, suffice it to say that most woody plants can form spontaneous “adventitious” buds and shoots from tissue in their inner bark. Almost all broadleaf shrubs and trees can form them and will sprout again as long as they were healthy to begin with.

When doing radical surgery, it is essential to practice proper pruning techniques. Use sharp tools and trim stems carefully to prevent tears or nicks to the bark below the cut. If small dormant buds or nodes are visible, make your cuts about a half-inch above them. Completely remove crossing branches and those that appear weak, older, diseased, or undersize in favor of younger, more vigorous ones. (Young shoots will have thinner, greener bark than older ones.) As far as how high to leave the stubs: Stems thin enough to be cut by hand pruners or loppers should be 6 to 18 inches long, while larger stems cut with a saw should be only 1 to 3 inches high to allow for proper bud development. If you cut your plant back the previous year, make the new cuts slightly higher.

During summer, trees and shrubs store energy reserves in their roots, which they use during dormancy and to fuel new growth the following spring. Accordingly, the best time to accomplish hard pruning is in late fall to early spring after deciduous species have lost their leaves and there have been several hard frosts. During this period, more of the plant’s energy reserves are in the roots, and removing stems will cause relatively less stress to the plant. Extensive trimming in late spring and early summer — when energy reserves have been depleted to fuel new growth — can greatly weaken or even kill the tree or shrub. Also avoid pruning late in the growing season, as it can produce new shoots that do not have time to properly harden off for winter.

Pick the right time. There are woody plants that we cut back every year and others we cut back only every three to seven years. This latter group includes broadleaf evergreens and small trees, individuals growing in shade, as well as flowering species that bloom on “old wood,” like forsythia, azaleas, and magnolia. Spireas, some hydrangeas, and certain species of elderberry produce flowers on the current year’s twigs and can be pruned annually. As a rule, species that bloom on new wood tend to flower in summer, whereas those that flower on old wood bloom in spring from flower buds that have overwintered from the previous year. Though you can technically cut back the old wood every year, you would never see those plants flower.

Go for the leaves. Loss of flowers might not be an issue if your primary interest is foliage. The vigorous, juvenile shoots that develop from stump sprouts have leaves that might be two to three times the size of those on older branches. Also, since red and yellow pigmentation is more intense in younger leaves, cutting back colored-leaf varieties will result in richer and longer-lasting color. We cut back our ninebarks and smokebushes annually, and though they never flower, the resulting leaves are bigger and more intensely colored. The same is often true with variegated selections. For varieties that flower on new wood, such as Hydrangea arborescens ‘Annabelle,’ flowers are substantially larger and later on these new shoots.

Mind the graft. Grafts require special treatment whenever you cut them back. Some woody plants are most easily propagated by stem grafting, where a bud or shoot (scion) from a superior species is spliced onto a rootstock from an unremarkable but resilient relative. Apples, crab apples, flowering cherries, dogwoods, and Japanese maples are routinely propagated in this way. If you’re too aggressive in your pruning, chances are the weedy rootstock, and not the scion, will sprout back, and your beautiful shrub will quickly go from gentleman to cad. If you wish to cut back grafted varieties, be sure to stay at least a few inches above the graft (visible as a swelling or scar near the base of the trunk), and prune off any sprouts that grow from below it.

What to Cut — And When: Certain plants benefit from more regular pruning, while others need time to regenerate between cuts. This guide summarizes the timing that’s best for different varieties.

Cut Back Every Year: