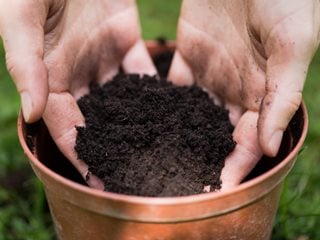 The topic of potting soil may not seem terribly exciting, but it matters greatly when it comes to the health of your plants. Potting soils were developed for plants that are grown in containers, which have different needs than those in the ground.

All potting mediums are not created equal. Just as in nature, plants such as succulents require different soil than ferns. Different potting mixes were formulated to respond to those needs. Knowing what’s in your potting soil will allow you to give your plants what they need in order to be healthy and perform their best.

WHAT IS POTTING SOIL?

Potting soil, also known as potting mix, is comprised of various ingredients that provide a healthy environment for potted plants to grow. These mixes are designed to keep the soil from becoming too compacted, which can suffocate roots and impede the flow of water and nutrients. A high-quality potting mix will be lighter weight and fluffy, with the ability to hold moisture. There are many different types of all-purpose blends, as well as more specialized mixes.

There are several basic components that may be included in your potting soil: 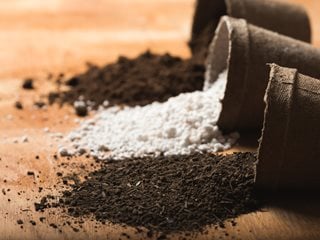 Organic plant or animal-based materials comprise the primary ingredients. These can include sphagnum peat moss, rice hulls, processed forest products such as aged or composted bark, manure, compost, bat guano, poultry litter, or earthworm castings. Coconut coir, a renewable resource made from coconut husks, is increasingly being used as a substitute for peat moss, which is less sustainable.

Inorganic natural materials help to provide aeration, improve drainage, and retain moisture. These include perlite, vermiculite, pumice, sand, or cinders. (See below for more on the difference between perlite and vermiculite.)

Fertilizers, which are the primary source of nutrients, can be all-purpose time-release fertilizers, synthetic blends or nutrient-dense organic amendments such alfalfa meal, bone meal, and kelp meal. Avoid potting mixes that contain chemical fertilizers, especially if you are growing edibles.

Other additives may include lime to balance pH levels, beneficial microbes, and wetting agents to help retain moisture. Some brands have their own patented additives.

Cheaper or generic brands may contain fillers such as garden soil or topsoil, which can compromise texture and quality. Though brand name potting mixes can be more expensive, they are worth the extra investment. Avoid potting soil that doesn’t list the ingredients on the packaging. 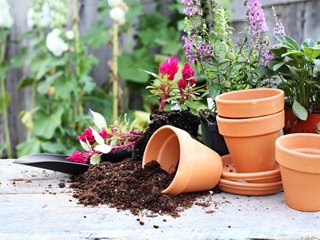 Potting soil vs. garden soil: Garden soil is a blend of soil and soilless ingredients that is used to improve garden beds. It is sometimes added to homemade potting mixes, but is not recommended for use by itself in containers as it can compact more easily, causing root rot and drainage issues.

Potting soil vs topsoil: Topsoil is soil taken from the top layer of the earth. Quality can vary widely. Though it can be used in beds and borders, it’s also used for filling in holes, building berms, or other uses where quality is not a factor. Topsoil is less improved than garden soil and is not suitable for containers. 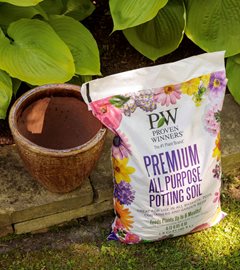 "BEST OF THE BEST"

Proven Winners Premium Potting Soil was crowned "Best of the Best" by Best Reviews, calling it "a great all-around soil mix." They also note that it "drains well while remaining moist even in hot conditions" and "does not suffer from common issues like fungal growth or gnat infestation." Plus, the addition of dolomite lime buffers soil pH levels—perfect for vegetable and herb gardens.

There are many different blends to respond to various plant needs. Here are some of the major types:

All-purpose: Formulated for general indoor and outdoor use, including houseplants, hanging baskets, window boxes, ornamentals, herbs, and edibles. These can also be found under other label descriptions such as potting soil, potting mix, and container mix. Ingredients vary according to brand.

Indoor potting mix: These include all-purpose or mixes specifically labelled for indoor plants. They are intended for general use for most houseplants. Look for blends that contain no compost or bark, which can shelter fungus gnats, a common indoor pest.

Raised beds: Formulated for outdoor raised bed plantings, these mixes may be fortified with nutrient-rich ingredients for growing vegetables and other heavy feeders.

Garden soil: This soil-based medium may contain organic or inorganic enhancements as well as fertilizer. It is intended for use in raised beds or in-ground garden beds.

Seed starting mix: This soilless blend is lighter and quick-draining to encourage healthy root development. The fine texture promotes higher germination by allowing better soil contact with seeds, while the sterilized medium helps prevent growing issues such as damping off disease. (See more on how to start seeds).

Cactus and succulent mix: These low-water plants prefer a leaner soil that dries out quickly. These mixes contain a higher ratio of perlite, sand, or other inorganic material to provide optimal drainage and allow air to the roots.

African violet mix: These popular flowering tropicals prefer a warm moist environment that simulates their native jungle habitat. Formulated for extra aeration, improved drainage, and moisture retention, this mix can also be used for other houseplants.

Orchid mix: Growing natively on tree bark in tropical rainforests, these exotic flowers require a soilless potting mix comprised primarily of bark chips. Charcoal and perlite may be added to improve drainage. This mix is also suitable for bromeliads and other epiphytes.

What is the difference between perlite and vermiculite?

Peat moss and other ingredients in potting soil decompose, resulting in compaction and a loss of nutrients. Used potting soil can become contaminated and develop soil pathogens. For optimal results, potting soil should be replaced at the beginning of each growing season. Opened bags should be used within 6 months, while unopened bags can last 1 to 2 years from purchase.

Can you reuse potting soil?

Used potting soil can be rejuvenated, though there is an increased risk of disease if not done properly. If the mix smells bad or is moldy, spread it out in the sun and allow to dry in order to kill pathogens. Add fresh peat moss or coconut coir to make the soil lighter. Nutrient-rich additives can include compost, earthworm castings, bone meal, and kelp meal. Used potting soil can also be recycled into flower beds, vegetable plots or the compost pile. Don’t reuse soil from a container where a diseased plant has grown.

Do you need to add fertilizer?

Containers are quickly depleted of nutrients due to regular watering. Even fresh potting mix that contains fertilizer will need supplemental nutrients. Midway through the growing season, apply a water-soluble fertilizer such as fish emulsion or seaweed every two weeks.

PRO TIP: Our horticultural editor, Denise Kelly, recommends wearing a mask when mixing or working with potting soil—especially those with fine particles or manures. She adds, it can also be harmful to breathe in perlite or vermiculite, as these particles can get lodged in your lungs, and suggests wetting both products to eliminate airborne dust.