Beloved harbingers of spring, trilliums, an American wildflower, are easy to grow By Jenny Andrews; Photography by J. Paul Moore

Lovable common names such as wake-robin, whippoorwill flower, toadshade and sweet Betsy reflect the special place trilliums hold in the hearts of nature lovers. A member of the lily family, trilliums have plant parts in threes (hence, the genus name) and bloom scents like fruit or rotting meat to attract such pollinating insects as gnats. 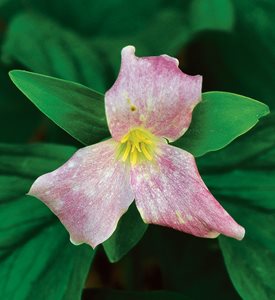 Great white trillium is one of the showiest and best-known species. White petals fade to pink or nearly red as flowers age, though some forms open pink. Its range extends from the Northeast to the Midwest and as far south as Georgia. 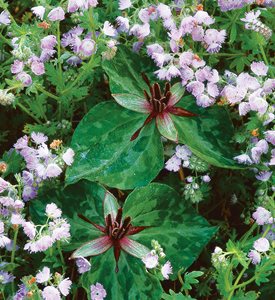 One of the most distinctive and beautiful species, twisted trillium has spiraled, dark maroon-purple petals and horizontal sepals surrounding a clutch of purple stamens. Blooms late March to mid-May. Its narrow range in the wild extends from central Tennessee to the upper Coastal Plain of Alabama and Mississippi, often on limestone outcroppings. 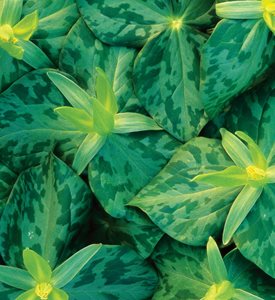 Yellow trillium, with its lance-shaped, greenish to light yellow petals and large mottled leaves, is one of the most familiar species. Though many trilliums have yellow forms, which can lead to some confusion, T. luteum has a distinctive lemon scent. It produces one to two stems per plant, becoming quite impressive over time. Occurs naturally from North Carolina and North Georgia to East Tennessee and Kentucky in limestone soils. Blooms April to May. 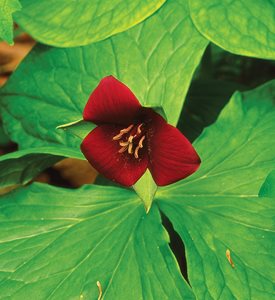 Named for the sulcate (boat-shaped) tips of the petals and sepals, the southern red trillium or rainbow wake-robin occurs from West Virginia to Alabama. Typically dark red-maroon flowers can also be pink, white or yellow, with white or black eyes. Leaves are 8 inches across. Blooms April and May. 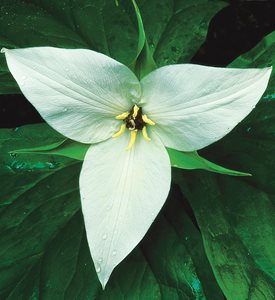 A creamy-white flower with a purple-black pistil makes sweet white trillium one of the showiest. Added bonuses are a green-apple scent and broad, solid green leaves. Adaptable, though its distribution is small, around the Great Smoky Mountains. Blooms April and May. 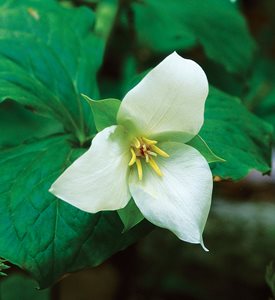 Bent trillium ranges from the Great Lakes to Tennessee and Pennsylvania, typically in limestone soils. Thick-petaled white flowers perch at a right angle on 5-inch stalks, with an old-rose fragrance. Peduncles can be straight, inclined or declined beneath the leaves. Blooms April to early June, depending on locale. 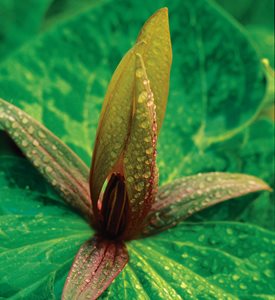 A wide distribution has led to many quaint common names—purple toadshade, whippoorwill flower, sweet Betsy and bloody butcher. It can be seen carpeting the forest floor in woods from Kentucky and Tennessee to the Carolinas and Mississippi. The wide variety of leaf mottling (silvery green to dark purple green), size (6 to 20 inches) and flower color (bronze, red, yellow, green or bicolored) can make this a confusing species to identify. Prefers limestone soils but is adaptable and even somewhat sun-tolerant. Blooms from early March to mid-April. 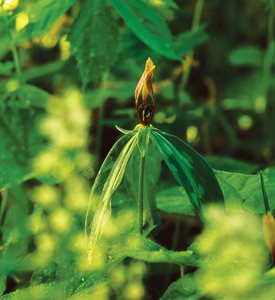 Lanceleaf trillium has narrow leaves and linear, often twisted petals. Flowers can be maroon, purple, greenish-tan or bicolored. Not abundant anywhere in its natural range; pockets occur from Tennessee to Florida. Most often found in alluvial soils. Though easy to grow, it’s rarely available. Mottled leaves have a silver blaze down the center. Blooms February to March or April to May, depending on region. 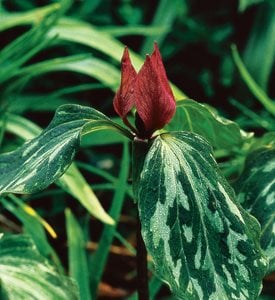 The prairie trillium has strongly reflexed sepals tucked between the leaf petioles. Has a wide range, concentrated where the Mississippi and Ohio rivers meet. Leaves heavily mottled. Flowers can be maroon, yellow or bicolored, blooming in mid-March to mid-May. 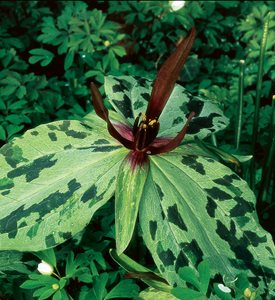 Louisiana trillium is almost completely limited to that state (ludoviciana means Louisiana). Petals can be all purple but most often are grayish-silver-green at the tips. Richly marbled leaves are often showier than the flowers. Blooms March to April. 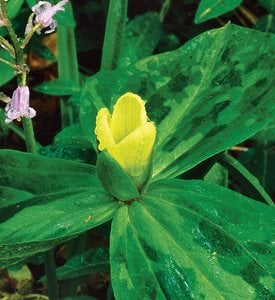 The natural range of pale yellow trillium is the upper drainage of the Savannah River. Creamy-yellow flowers can have a spicy scent like sweetshrub (calycanthus). Blooms mid-April to early May.

Native to eastern North America, the West Coast and Asia, there are over 40 species, divided into two groups: pedunculated (with flowers on a stalk or peduncle) and sessile (with flowers flush against the leaves). Trilliums take four to seven years to reach flowering age, which, with difficult propagation, has led to plants being dug from the wild, putting these wildflowers near the top of the list for conservation.

With elegance and quaint charm, trilliums can be subtle standouts, particularly with their sleek lines set amid frothy spring flowers. Many trilliums have showy maroon-red, yellow or white blooms and attractive mottled foliage.

Trilliums are native to zones as high as 9 and as low as 3. They can often be grown out of their natural ranges between north and south, but the translation between East and West coasts is less successful. West Coast species prefer a mild maritime climate.

As woodland wildflowers, trilliums prefer high shade, though some species can take a little sun. Protect from bright noonday sun, and avoid western exposures. Deeper shade is fine in summer, though the extreme darkness of evergreens can keep trilliums from thriving.

For best growth, plant in rich, loamy or humusy soils with good drainage and neutral pH. Some species prefer limestone-based soils; some, acidic soils. They can take ample water when flowering, but prefer a dry dormancy period (late summer through winter).

At planting time, add leaf mold or organic fertilizer. Trilliums don’t require regular fertilizing, but can benefit from an application in late winter. Alkaline-soil lovers appreciate a yearly dusting of lime. Despite the depth of wild rhizomes, most trilliums prefer shallower planting in the garden, 3 or 4 inches down. Remove thick leaf litter so seedlings can take hold. When purchasing trilliums, look for “nursery-propagated” ones.

WHERE TO BUY TRILLIUM BULBS ONLINE