A Guide to Growing Lily Flowers

For high drama and romance all summer long, the genus Lilium is a must By Tovah Martin; updated 9/1/2021 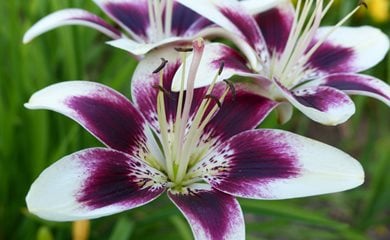 Lilies, one of the most beloved bulbs for the summer garden, burst in with kaboom blossoms at an interlude when most flowers are in a holding pattern. Offering “swoony” scents, strong stems and substantial petals, lilies are also workhorses as cut flowers.

Zones 5 to 8 are ideal for most lilies. Some are hardier, such as L. canadense and L. cernuum, which will tolerate the chill of Zone 3, but often not the heat in regions hotter than Zone 6 or 7. Easter lily, L. longiflorum, prefers Zones 7 to 9.

Lilies love full sun, and six hours or more is imperative. Lilies like to have their "head in the sun, feet in the shade." To keep their roots cool, plant them with low-growing annuals, perennials, or grasses.

Most lilies like a soil that’s rich but not overly beefy, though the Orienpet lilies are not fussy about food and tolerate a leaner diet. Drainage is the critical issue. Given their druthers, lilies would like to be planted in a berm or raised bed so water drains away from the bulbs. A pH of 5.5 to 6.5 suits them best.

There are many types of lilies but these are some of the most common:

Lily bulbs can be planted in spring, but getting them into the ground in autumn gives them a head start. Because they are stem rooters and the bulb often anchors a heavy blossom load, it’s critical to sink it at least 8 to 10 inches from top of bulb to top of soil. In regions where temperatures skyrocket above 90 degrees F on a daily basis, sink the bulbs an extra 4 inches or so deeper.

For more information about planting and storing bulbs, see Bulbs 101

Take precautions against voles and other pests, especially in winter. And deer chomp the stems. Insects are also a peril. In earliest spring, when lilies first emerge, begin lily beetle patrol. They’re bright red and easy to spot. Simply remove them before they reproduce and wreak havoc.

Stake your lilies before the blossoms begin to weigh down the stems, making sure not to impale the bulb.

Don’t hesitate to cut your lilies for bouquets—but remove only 1/3 of the stem. Lilies use their foliage to replenish the bulbs for next year’s blooms. When cutting lilies, remove the anthers before bringing them indoors, as they can stain clothing and tablecloths.

After blooming, the flower stems can be cut back but leave the foliage until it browns and dies back to the ground completely. Bulbs gather energy for next year through the leaves. 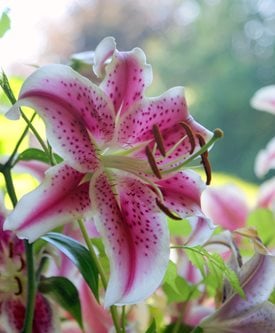 Hybridized in the 1970s, ‘Stargazer’ is one of the most popular lilies in modern history. Featuring upward-facing, vibrant pink spotted flowers up to 8” wide, this fragrant lily performs well in the garden and makes a good cut flower. ‘Stargazer’ is an Oriental lily that doesn’t require staking and can be grown in containers. As a bonus, it will attract butterflies and hummingbirds. 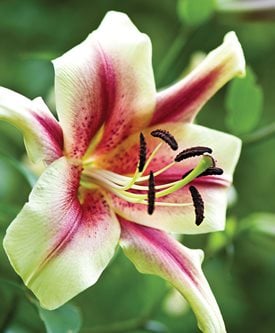 Wedding an Oriental and a Trumpet (OT or Orienpet hybrid) lily in 2002, the big-blooming, open-faced beauty ‘Touching’ was born, with a compact size and changing background shades starting with a creamy-yellow debut, evolving into a whiter shade of pale. Each wide petal is also streaked with peachy pink. Strong roots anchor the plant, and the flowers linger long in prime condition. 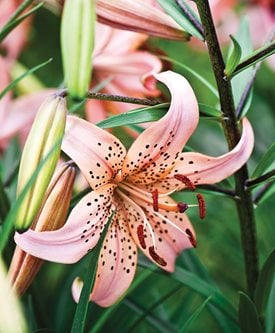 When Dutch garden designer Jacqueline van der Kloet needed a lily to span the summer months at the New York Botanical Garden’s Seasonal Walk, she headed straight for ‘Pink Twinkle’. This 3- to 4-foot, glowing coral-pink bloomer scarcely ceases its bloom stint throughout summer. With freckled blossoms that triple the size of its tiger lily parents and look you straight in the eye rather than bowing their heads, ‘Pink Twinkle’ can waltz with pink as well as orange companion flowers. 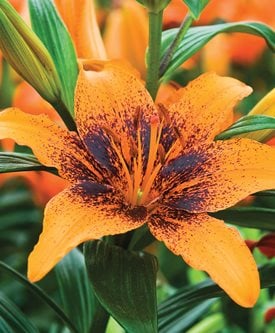 When Dutch breeders turned their hands to lilies, they went straight for the pizzazz and have been mixing suffused colors and essential traits ever since. Fifteen years ago, Mak Breeding started its foray into the Tango Lily series of Asiatic lilies, with a signature central “face” of contrasting shades. Recently introduced, Orange Art® does the series proud with its nearly neon, pumpkin-orange blossoms and densely packed shiny black dots toward the bull’s-eye. 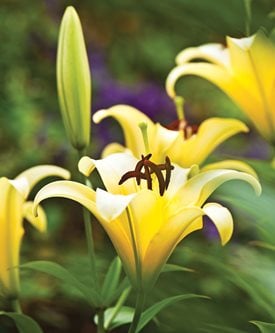 The first lemon-colored Orienpet hybrid to jolt the lily world, ‘Yelloween’ was introduced in 2001 with seismic reverberations. This sunny-hued bloomer with lime veins still holds the championship title for its color. Economically, it offers several virtues that cut-flower growers adore—the upturned flowers and a willingness to perform at cooler temperatures than most lilies (which saves on greenhouse heating costs). As Arie Alders of Mak Breeding says, “Some come, some go, but this lily endures.” 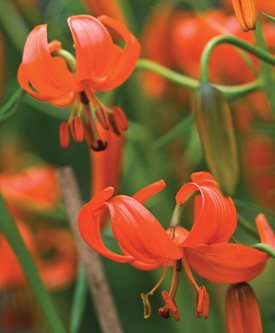 In its native Siberia, China and Korea, Lilium pumilum weaves discretely through the grasslands. But when infused into the garden, its fiery colors spark, with an orange that verges on saffron. Standing about 1½ feet tall, this is one of the more demure lilies. The fact that the bulbs themselves are small makes it easy to nestle them in natural plantings. Bulb expert Anna Pavord recommends cutting the seed heads to allow as much of the plant’s strength as possible to return to the bulbs. 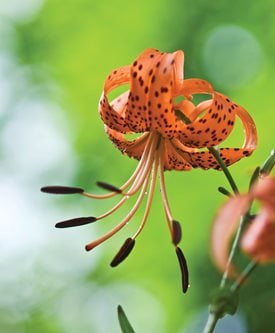 Legend has it that Lilium lancifolium sprang from the friendship between a hermit and a wounded tiger. When the tiger died, the hermit transformed his friend’s body into a lily. When the hermit passed, the flower spread over the Earth looking for its companion. Among the easiest lilies for naturalizing and readily visible from a distance, this species has tall (staking is imperative) candelabras bearing a constellation of luminous orange, speckled, nodding blossoms with recurved petals. 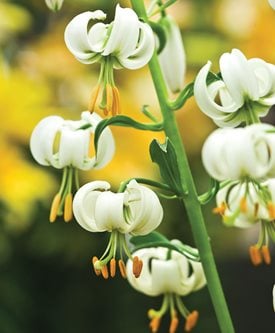 When a lily flower is described as a Turk’s-cap type, it’s the back-flung petals and the shape of the flower that the term describes, and lilies of several divisions share the trait. Martagon lilies are generally some of the easiest and hardiest to host. Although the flowers are relatively small, martagons go for quantity. In the case of Lilium martagon var. album, spires with two-dozen or more sparkling white flowers gradually open in a long, choreographed display. 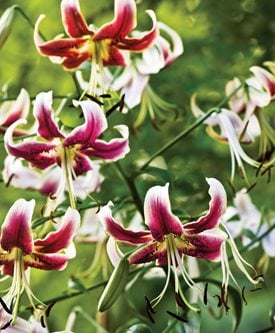 The creation of Judith Freeman, an American breeder from the West Coast, ‘Scheherazade’ is a classic Orienpet hybrid and the love child between ‘Thunderbolt’ and ‘Black Beauty’. This towering lily can stand 8 feet tall and carry a bloom load of 40 sizable flowers per stem. Blossoms can appear to be edged with white or gilt with bright-rose markings darkening to burgundy. Although the flowers are dispersed, the spires require staking. 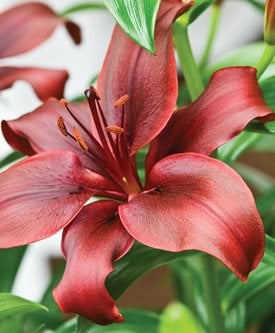 Ten years ago, Mak Breeding’s holy grail was to achieve an Asiatic lily that verged on black. Still considered the darkest maroon on the market, ‘Dimension’ is a deep, sultry shade of burgundy right down to the stamens and pistil. The petals are thick and waxy with the sheen of silk, and each flower is edged in red. Not only is ‘Dimension’ a great cut flower due to the shipability of the upturned flowers, it’s a strong garden contender as well.

What is the difference between Asiatic and Oriental lilies?

Which lilies are most fragrant?

The most fragrant lilies are Orientals, Orienpets and Trumpets, while Asiatic lilies are unscented. Some gardeners describe Orientals as having a spicy scent, whereas Trumpets emit a sweet perfume, and Orienpets offer a pleasant, light aroma (good if you have a sensitive nose).

Which lilies grow in shade?

Lilies flower best in full sun, but many gardeners find that they will also tolerate some shade. Species lilies, those originally found in the wild, are a good choice for light shade. Martagon lilies can also handle more shade than other lily types.

Many lilies are highly toxic to cats, causing acute kidney failure if eaten. All parts of the plant are poisonous and many veterinarians recommend never bringing them into a home with cats. Use caution with Easter lilies and opt for floral arrangements without lilies. See more Common Poisonous Plants for Dogs and Cats.

WHERE TO BUY LILY BULBS ONLINE

In addition to the nurseries listed below, check reputable local sources.