So easy, so elegant, so willing to come down from the mountains and meadows into your garden Text and Photos by Ken Druse

Certain words that get attached to gardening make me a little anxious, for example, “easy” and “foolproof.” We know that few worthwhile things in gardening (and life) are simple to attain. That said, columbines could be described with these words. After all, columbines come up easily from seed and bloom when young—for nearly any gardening fool. 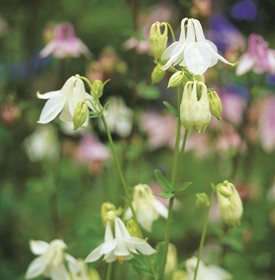 The variety of columbine shapes and colors is astonishing even within a single group of hybrids. Shown here is delicate white Aquilegia vulgaris. 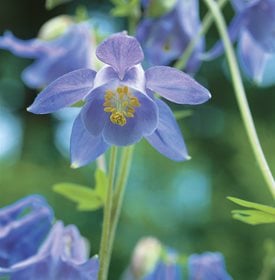 A blue-flowered strain of the same group, which Ken Druse developed. 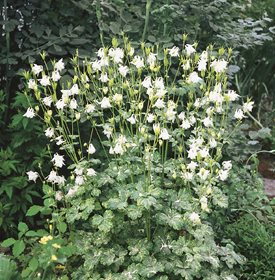 Aquilegia vulgaris ‘Aureovariegata’, another selection of European species, has green leaves mottled yellow that fades to white and pristine white flowers. After blooming, cut the plant back for a flush of brilliant new foliage. 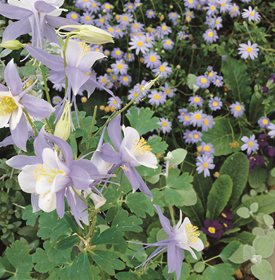 One color from the ‘McKana Hybrids’ mix. 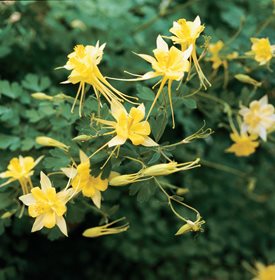 A. chrysantha, a golden native of the Southwest. 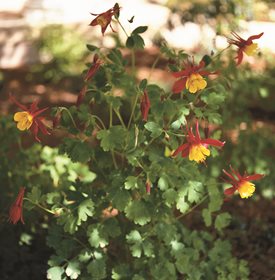 A two-color hybrid that resembles A. formosa, the West Coast native, might possess some of its genes. 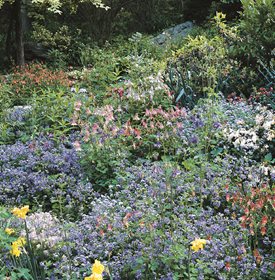 An early-blooming strain self-sows within a carpet of spring daffodils and blue Phlox divaricata. 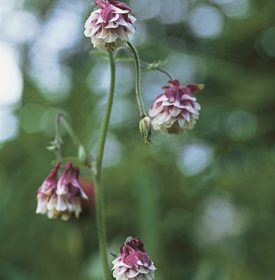 A plant with tiny double flowers pops up not far from where ‘Nora Barlow’, an old-fashioned variety named for Charles Darwin’s daughter, once grew. 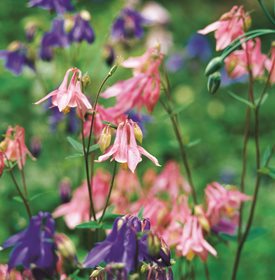 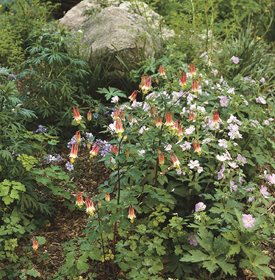 If isolated in the garden, species such as North American favorites Aquilegia canadensis, shown, from the East, and A. caerulea, the Rocky Mountain columbine, will remain true. 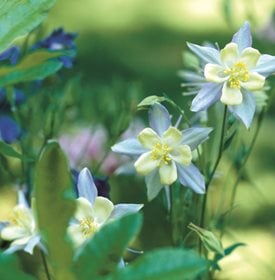 A. caerulea, the Rocky Mountain columbine.

Columbines also are easy to appreciate. They bloom from midspring through early summer. Some species have flowers in one color; others have contrasting sepals and petals. There are alpine miniatures a few inches tall and hybrid garden plants up to 3 feet. Some species have blossoms that dangle or nod, and others are upright, somewhat like a horn.

All species have spurs that project toward the rear of the flowers, identifying them as columbines. The Latin name (Aquilegia) comes from these spurs, which on some species resemble eagles’ claws—aquila is Latin for “eagle.” The leaves are also very recognizable: They are made up of green to bluish-green leaflets held flat in sets of three, six or nine on long petioles or leaf stems. Other plants with similar foliage even draw on the columbine name to highlight the resemblance—Thalictrum aquilegifolium is the columbine meadow-rue.

Several species are North American natives. The little nodding red flowers of Canadian columbine (Aquilegia canadensis) can be seen in spring on plants indigenous to the Eastern states. Canadian columbine forms patches in the open shade of the Eastern woodland; it can be grown in Zones 3 to 8. Golden columbine (A. chrysantha) grows in the Southwest, and a subspecies can be found east to Texas, popping up in rock crevices or at the edge of short-grass prairies. Although golden columbine comes from hot and dry climates, it and its varieties are hardy in Zones 4 to 8. Spurs up to 4 inches long distinguish the pale yellow longspur columbine (A. longissima) from the Southern U.S., which grows in Zones 4 to 8. The gorgeous blue and white Rocky Mountain columbine (A. caerulea is Colorado’s state flower). Just imagine what it must be like to come across thousands of plants sweeping across an alpine meadow. It grows in Zones 3 to 8.

The native plants spread by seed that spill out of chalice-like pods as they wave in the breeze. The reasons why columbines are considered easy to grow may be that they self-sow, grow quickly and bloom young. But there could be a price to pay. Columbines are very short-lived perennials. For me, most behave like biennials, germinating in one season and blooming the next year. I rarely see the same individual plant for more than a year. The seedlings bloom in place of their parents, so I always have flowers. But unless they are kept isolated from the others, species and varieties will hybridize freely to produce flowers that exhibit characteristics of both parents and all of their ancestors. When asked which columbines I grow, I have trouble answering. My plants are “Aquilegia mixedupensis.”

An early and still popular named hybrid was introduced in the mid-1950s. The large, long-spurred ‘McKana Hybrid’ flowers look somewhat like A. caerulea but come in a variety of pastel color combinations. Today, commercial varieties are classified as long- or short-spurred. The long-spurred hybrids may have A. canadensis, A. chrysantha, A. caerulea and A. Formosa in their heritage. Short-spurred hybrids evolved when the European species A. vulgaris was added to the mix. I know that A. vulgaris (Zones 4 to 8) is somehow present in my garden, because most of my plants have short spurs. Double flowers are also a clue to the presence of A. vulgaris as a parent. ‘Nora Barlow’, a cultivar of A. vulgaris named for Charles Darwin’s granddaughter, and ‘Adelaide Addison’, pompon-flowered plants that grew in the garden one season, may have contributed the characteristic of double petals I have noticed.

Because columbines practice such free love, I have been able to paint with columbine color in my garden. When the first flower opens on a plant, I weed it out if it exhibits a shade I might not want. For instance, in one bed I encouraged flowers that are pale pink to white. I plucked out the occasional muddy lavender-roots and all. After a few years, no plants in the “wrong” color appeared. It is possible that I have developed my own “strain.”

A strain is a genetically pure population of plants that retains its uniqueness from generation to generation if the plants are grown in isolation, in a colony of their like kind, far enough away from other types that might contribute pollen. Pulling out the rogue plants stops them from setting seeds so that only those with the desired attributes self-sow. This is how heirloom varieties of fruits and vegetables are developed and why they can be grown from saved seed. So I have waves of pastel pink tints in one spot. Across the garden is another bed, where the flowers are cherry to wine red. In another spot, most of the flowers are double—deep purple or purple with frilly white petticoats.

Columbines do have a few problems. In dry summers, the leaves may show symptoms of powdery mildew (white powder on the leaves) or rust (orange-red blotches on the leaves). Most people who have grown columbines already know about their run-ins with leaf miners. Many species and nearly all hybrids are victims of these insects that eat the tissue inside the cells of the leaves, creating disfiguring, pale-colored tunnels. All these problems are rarely fatal and can be treated with chemicals. But I live with the damage, and after flowering cut the plants way back to encourage a flush of new undamaged foliage.

Columbines are easy and foolproof, but I suppose these few problems keep them from gaining one other hopeful garden characteristic—carefree.

The seedpods of columbines are attractive, upright vessels filled with shiny black seeds. If you are not around on the day the pods split open, the ripe seeds will scatter several feet in every direction. That may be just what you want. But if you are keen to collect seeds from a few of your plants to share or sow in another part of the garden, you have to be vigilant. One of the best ways to bag your quarry is to cover the pods before they ripen.

As the last flowers are fading on a plant, the first seeds will be ripe. Cover the entire cluster of fruits with an inverted brown paper bag and tie it closed around the stems. Leave the bag on the plant until the stalk showing below the tied stem begins to turn brown. Then, cut the stems and bag off the plant, bring the bag inside and hang it right side up in a location with good air circulation. The seeds will fall from the pods into the bag. In a few weeks, when the stalks are dry and brown, shake the bag to free any seeds caught in the pods. Untie and open the bag and carefully remove the stalks.

You may want to store some of these clean, black seeds in paper envelopes to sow later or to give away. For long-term storage, place the envelopes in a closed glass jar and place in the refrigerator. Seeds can be kept viable for years this way.

You can sow these seeds at once on the ground where you want them to grow or in pots to place in a cold frame, or you can sow them in winter on the snow or in early spring either in pots or directly on the ground. (Alpine species may take two years to germinate.)

A Matter of Taste

If a flower is blue, we pine for it. If it is green, brown or black, we’ll kill for it. Two species of columbine satisfy the requirements of both the gardener with refined tastes and the full-blown plant freak: fan columbine (Aquilegia flabellate), Zones 3 to 9, and green columbine (A. viridiflora), above, Zones 4 to 8.

The fan columbine is a Japanese species that grows into an 18-inch-tall, compact, dense plant with thicker, bluer leaves than most species. The flowers also have a compressed appearance in shades of lilac to blue with curved or hooked spurs. There are a few cultivars, including Aquilegia flabellate ‘Nana Alba’, which is shorter than the species, and A. flabellate f. alba, with white flowers. These plants are wonderful in flower borders where the foliage can make a contribution before and after flowering.

Of the green columbine, Alan Armitage writes in his book, Herbaceous Perennial Plants: A Treatise on their Identification, Culture, and Garden Attributes, “... for those gardeners who cannot control their columbine habit, there is even a green-flowered species, Aquilegia viridiflora, which no one will like but you.” This plant has bicolored flowers, chocolate-brown petals with pale green sepals. I really like this species, but have to warn that if the subtle flowers are not positioned carefully, perhaps in front of a rock, they will blend into the background.