Botanic Superlatives: The Most Beautiful Corn

Glass gem corn was bred years ago by a part-Cherokee farmer and master seed-saver. Yes, it's real, and, as an heirloom, its seeds will grow true. Today, glass gem corn seeds are saved at Seeds Trust, who anticipate more available next month. Glass gem is an extreme iteration of corn's natural tendency towards different-colored kernels, as each kernel has its unique genetic set for color and size. By Anna Laurent 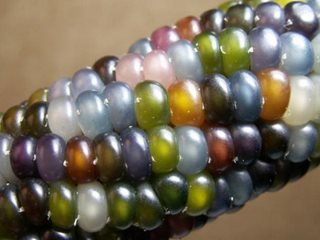 Tassels, silk, and glass gems—objet de luxe or, well, grain? If you're thinking of a certain husk-swaddled treasure, you are correct: Corn in general, and a rare heirloom variety in particular. Tassels and silk, with their pollen and ovules, are the so-called trimmings that produce an ear of corn. And glass gem is the name of a beautiful variety with a palette of improbable colors: lilac, merlot, robin's egg blue, pearl, baby pink. Yes, it's real, and, as an heirloom, its seeds will grow true.

Glass gem corn was born in Oklahoma, bred by a part-Cherokee farmer named Carl Barnes who had a knack for tinkering with corn. Over successive generations, Barnes selectively saved and planted seeds that demonstrated vibrant colors. Eventually, the octogenarian "corn teacher" bestowed his seed collection to Greg Schoen, corn-breeding protégé. Schoen, looking for a safe place to store Barnes's legacy, in turn passed on a sampling to fellow seedsman & seed saver Bill McDorman (at the time, McDorman was the owner of Seeds Trust, a small seed company. Today, he's the executive director of Native Seeds/SEARCH). Naturally, the seed lover selected several of the curiously-named "glass gems" to plant in his garden. He was not disappointed. "I was blown away." McDorman recalls. "No one had ever seen corn like this before."

Seeds sold quickly once photographs hit the internet (there is now a long waiting list at Seeds Trust, who anticipate available seeds for December). Why the demand? Glass gem is an extraordinary example of corn's natural growth. Anyone who's buttered a cob is familiar with the slight idiosyncrasies of its kernels—a lighter white nestled by a darker yellow, perhaps. This is because each kernel is independently pollinated via its own silk stigma, which correlates to unique set of genes, including those that control size and color. 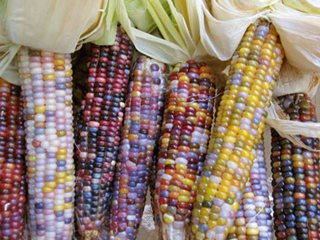 In fact, just about all corn ears were multi-colored before human selection. And before 1950, most of the corn grown in the US was open-pollinated. Today's commercial corn is hybridized—bred for flavor, color, and size. As to how different colors evolved, or were selected for, one science writer summarizes thusly: "Livestock feeders prefer vitamin-rich yellow kernels, Southerners like white kernels, and Native Americans favor blue. Years of deliberate selection, careful pollination, and storing of seeds produced these single-color corn ears. ... In general, colors help a plant attract or repel other organisms or hide from predators. Colors also occur as an integral part of biochemical reactions. Some studies suggest corn pigments promote resistance to insects or fungi that invade an ear of corn."

The silks that precede the kernels are no different from any other flower's stigma (pollen receptor). A well-developed ear has 750 to 1,000 ovules (potential kernels), each producing a silk (of which about 400 to 600 will be fertilized and eventually produce kernels). Silks are covered with fine, sticky hairs that catch and anchor pollen grains. When pollinated, each silk will yield its own fruit, or kernel. When the ovule at the base of the style is fertilized with pollen from a variety with a gene for a certain color kernel, that color can manifest as a single kernel in the new ear. And where does the pollen come from? Pollen anthers develop at the top of the stalk, in tassels arrayed like luxurious fringe. Each tassel contains from 2 to 5 million pollen grains. An individual's pollen rarely reaches its own silks, so the pollen usually comes from an adjacent plant. And, depending on the neighborhood, all sorts of color combinations can feasibly grow.

It should be noted that, while glass gem corn is edible, it's not sweet off the cob. It's a flint variety, which is often used to make flour, or simply ornamental.

Curious gardeners have lots of questions about glass gem corn, and those who have managed to secure seeds have already shared their experience planting them. Here are two useful comments by readers of a Discover article:

On growing: "I grew some gem corn this summer. I planted twenty or so kernels, and got five really good looking ears- each one with a different range of colors. Some ears that didn’t work well were pollinated by nearby yellow sweet corn, and were pure yellow themselves. I used sunlight only."

On the genetics: "It is not sweet corn. It is a flint type, but a great mix of colors. There is a helpful table in Mutants of Maize by Nueffer, Cole, and Wessler that describes the main genes that affect kernel color, and the main interactions. Information is also available from MaizeGDB on each of the mutants: aleurone and pericarp. To maintain the mix, these are probably sib mated and selected each generation for the range of colors. Obviously the colors are segregating and so you would have to make sure to maintain as many segregating as possible and not fix any of the alleles. If you wanted you could self out each color and make them homozygous and maintain the population as a synthetic. That way it could be recreated and increased in large quantities with predictable ratio of colors. But sib mating is a lot easier."