Enjoy a Visit to the Succulent Café

Stop in for a cup of coffee at a succulent fantasy land featuring a delightful array of plants all growing in unique containers, from old tennis shoes to hanging lanterns. This charming café is one of a kind. By Anne Balogh

There aren't many places where you can stop in for a cup of coffee and leave with a succulent plant. In fact, the charming little Succulent Café in Oceanside, California, may be one of a kind. Its courtyard is a succulent fantasy land, featuring a delightful array of plants everywhere you look, all growing in unique containers, from old tennis shoes to hanging lanterns. 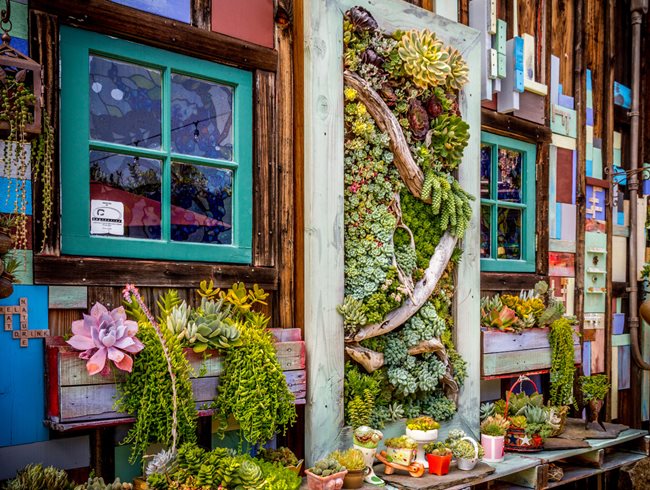 The owner of the café, Peter Loyola, enjoys creating vertical succulent arrangements like this one which combines multiple succulent varieties and pieces of driftwood within a wooden frame. Photo by: Kole Montross.

Owner Peter Loyola discovered a passion for succulents about 10 years ago, when he embarked on a project to transform his backyard into a drought-tolerant landscape. “I chose succulents over cactuses because I did not want my young boys to get poked while they played in the yard,” he says. “Plus, succulents gave me a wide range of colors, textures, sizes and shapes to choose from, from miniature species to giants, from symmetrical to rosette-shaped, leaves, to angry alien-like forms. My choices were endless.” 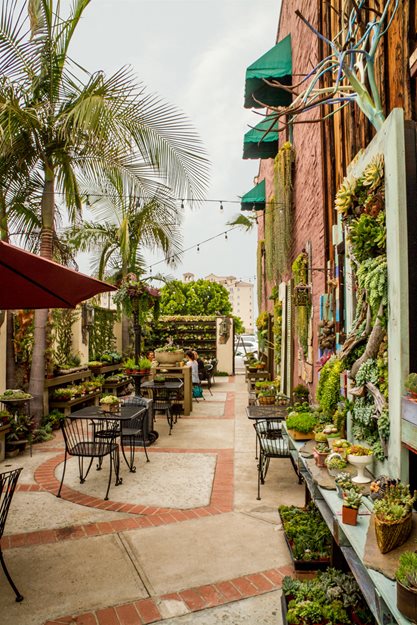 Several hundred arrangements are on display, many of which can be purchased. Succulent Café owner Peter Loyola enjoys decorating the walls with vertical succulent arrangements, often framing them like works of art. Photo by: Kole Montross.

What started as a hobby soon became a business. Loyola started selling succulent arrangements at his sister’s bakery during Valentine's Day and Mother's Day and they would quickly sell out. “My customers would say that my arrangements were a work of art and I should have them available year-round. Those kind words and constant feedback lead me to what is now Succulent Café,” he says.

Today, his café has several hundred succulent plants in stock, including many unusual varieties. Some of Loyola’s favorites include hens and chicks (Sempervivums), euphorbias, crassullas, haworthias and sedums, to name a few. 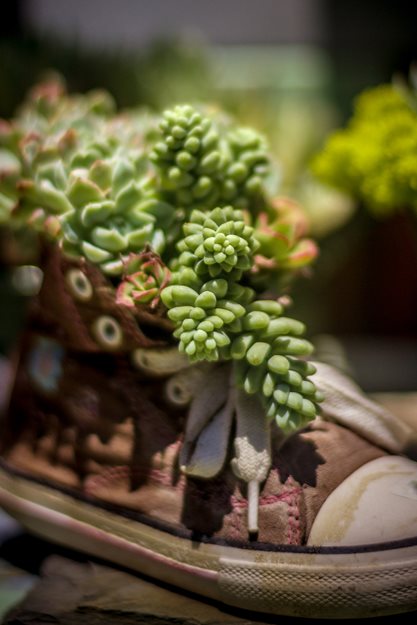 Loyola constantly challenges himself to come up with unusual containers for his arrangements, such as this old sneaker. “If I have to tweak or do some engineering to a container to hold soil, it will eventually have a succulent in it,” he says. Photo by: Kole Montross.

For the novice gardener, most succulents are easy to grow and quite forgiving, Loyola says. “Succulents require direct sun for a few hours a day, but also enjoy the shade. I water my succulents once a week. In general, they prefer dryness between waterings.” His preferred planting medium is simply a plain potting mix with added fertilizer. 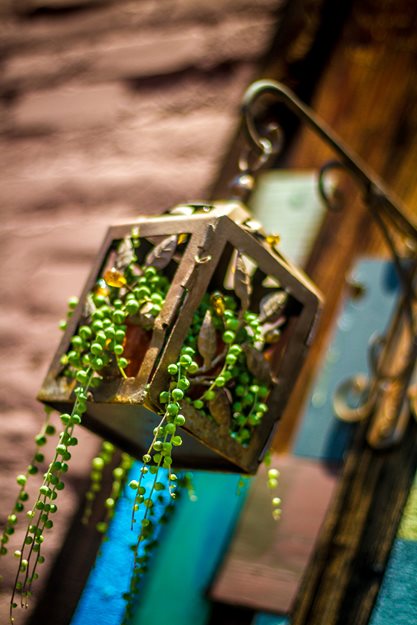 Loyola especially enjoys creating vertical succulent arrangements, from small framed pieces to giant wall hangings. “With gardening space being an issue, going vertical is the trend and the future,” he says. To create his succulent walls, he uses cuttings and inserts them through whatever framework he has selected. He then lays the plant frame horizontally for a few weeks until the plants take root before standing the frame vertically. “You can test this by pulling the succulent. If there is resistance that means your succulent is rooted and is ready to stand vertically,” he says. 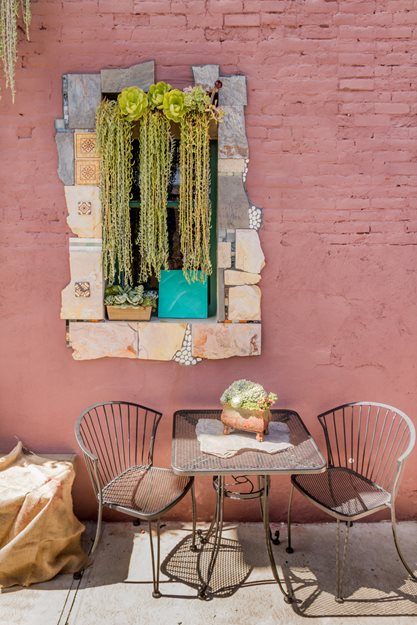 A succulent display doubles as a window valance. Photo by: Kole Montross.

Where does Loyola come up with the unique ideas for his displays? “Honestly, I don't have any trick or secret when it comes to putting an arrangement together,” he says. “I feel like my mind and fingers go on auto pilot. It just flows naturally.”

Succulent Café is located at 322 N. Cleveland St. in Oceanside. For a menu and hours, visit their website here.