Ornamental kales and cabbages are ubiquitous winter foliage plants, with leaves that turn colors after a couple of frosts. By Anna Laurent

Winter's cool handshake welcomes a number of hardy plants, including the many varieties of ornamental cabbages and kales (Brassica oleracea var. acephala, syn. Brassica oleracea var. capitata), which seem to be everywhere right now. Deeply hued and elegantly ruffled, they populate swaths of industrial parks in North Carolina, and tiny sidewalk boxes in Manhattan—individually, as the centerpiece of an arrangement, or in a group, as a phalanx of uniform rosettes. 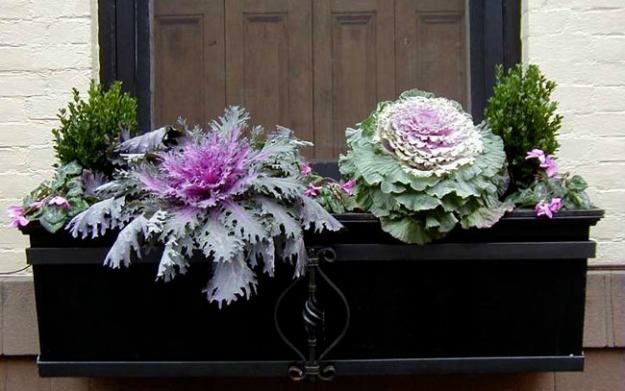 These decorative Brassicas are sometimes referred to as "flowering" cabbage and kale, which isn't altogether accurate. While they do flower—as biennials, they develop yellow-flowered spikes in the spring—they are cultivated as an autumn foliage plant. Their signature whorl of color are leaves, not flowers—after all, it is the season of changing temperatures, and changing leaves. As the mercury drops, so does the chlorophyll. After several nights of frost, the central leaves lose their green chlorophyll, revealing a rosette of white, pink, purple, and red. 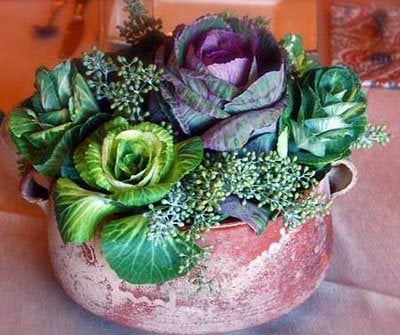 Both the ornamental cabbages and the ornamental kales are in the Brassicaceae Family, and they have been cultivated and hybridized for so long that classification can be futile. Generally, cabbages have leaves with wavy edges, while the leaves of kales are more ruffled. Cabbage leaves grow in heads, whereas kales grow in tight rosettes of upright leaves. The primary varieties are grouped in series: Osaka, Peaocck, Tokyo, and are distinguished by their colors.

While they are not a new addition to the gardener's winter palette—they seem to have become so ubiquitous that they are often unnoticed—one wonders whether the variegated leafy heads have recently acquired new meaning, now, as foraging is becoming popular. As we search for wild sidewalk purslane, are we more inclined to notice a cluster of deep purple cabbages, just outside the front door? 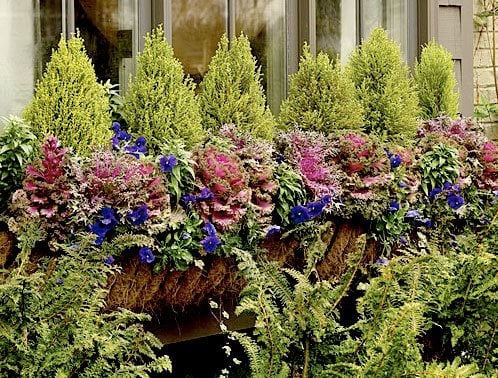 A window box of ornamental kales. (Photo by: Ralph Anderson).

(It should be noted that while ornamental kales and cabbages are edible, they are very bitter, and, any plant that has been landscaped in an urban space has most likely been sprayed with very inedible chemicals.) 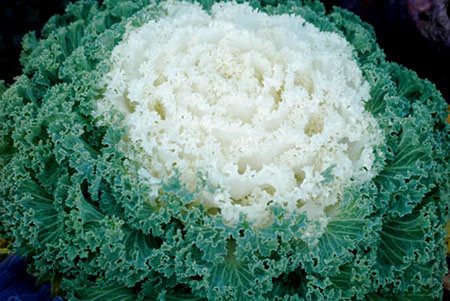 Like other kale cultivars, 'Nagoya White' is bred for its color and leaf shape. (Photo by: Karan Davis Cutler).

Anna Laurent is a writer and producer of educational botanical media. Photographs from her forthcoming field guide to Los Angeles are available for exhibition and purchase at her website.