The hills of Japan's Hitachi Flower Park blossom bright with about 30,000 bushes of Kochia, a bush whose leaves and stems turn red in October. A couple million light pink and white cosmos bloom alongside in the park's 153 hectacres. By Anna Laurent

When I lived in New England, we made autumn excursions to the orange and red hills of Vermont and New Hampshire. On the west coast, we get lost in corn mazes. Cooler temperatures mean that it's no longer summer, but the season still beckons us outside with fields of fiery-colored abundance. And in Japan, October is no different. Just outside Tokyo is a flower park that blooms bright in autumn. The hills are covered with Kochia scoparia (syn. Bassia scoparia), a Eurasian native annual shrub whose vernacular names are, appropriately, Mexican firebrush, fireball, or burningbush. Kochia leaves and stems turn from green to bright red in October. 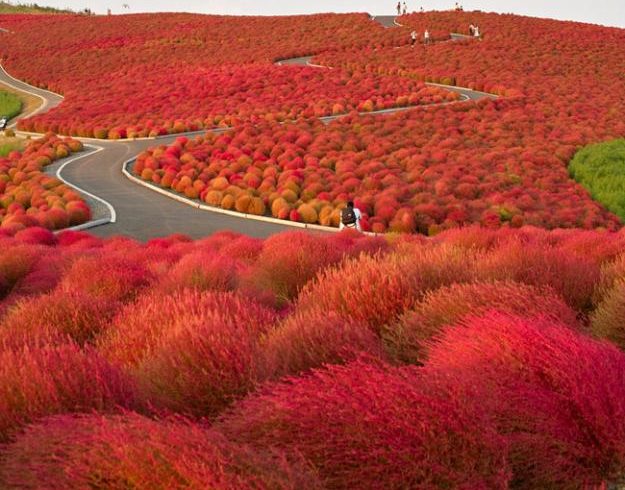 Flower festivals and flower parks are not uncommon in Japan, where cherry blossom gardens bloom in April & May, and chrysanthemums (kiku) are celebrated in October & November. Many flower parks are designed to offer a year-round variety of blooms, but, in many, the color has faded by now. Not so at Hitachi Seaside Park, a popular flower park just outside Tokyo, where Kochia bushes are currently displaying their best fall colors. The bush is famous for its autumn reds, which deepen as the plant's chlorophyll fades for the season. They are bright red through end of October, when the park closes. The park covers 153 hectacres, and is close to the Pacific coast. Visitors can walk the park through its hills, with the nearby ocean coming in and out of view. 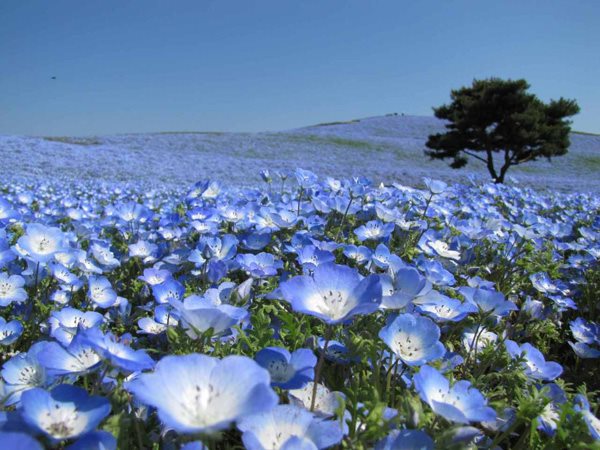 The flowers in Hitachi Park vary with the season: daffodils and tulips in the spring, blue Nemophila and roses in the summer. In early autumn, the cosmos begin to bloom—a precursor to Kochia. By October, the landscape is filled with some 30,000 red Kochia bushes, and a couple million pink and white cosmos flowers. 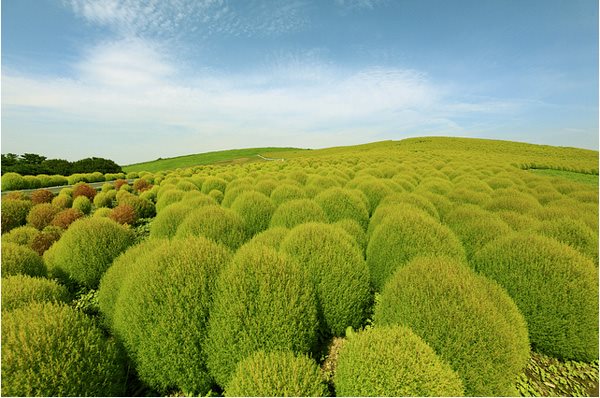 Kochia bushes are green before they turn red in autumn. Photo by: TANAKA Juuyoh / Flickr.

Kochia's value isn't limited to its autumn colors. While its bush form is known as burningbush, its seeds are called "field caviar." They are prepared as a food garnish called tonburi, and considered a delicacy in Japan's Akita prefecture. 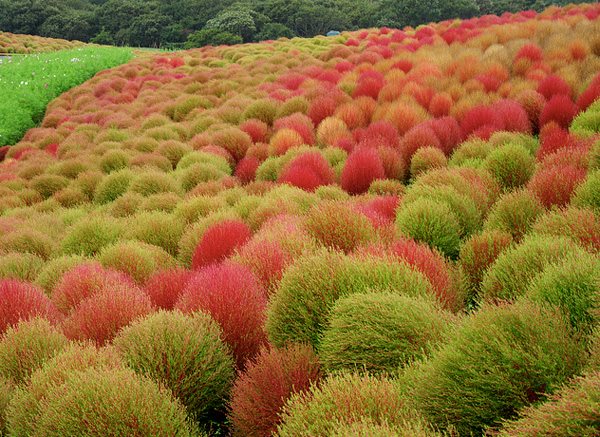 Later in the season, Kochia in a seasonal spectrum of color. Photo by: Dashaket / Flickr. 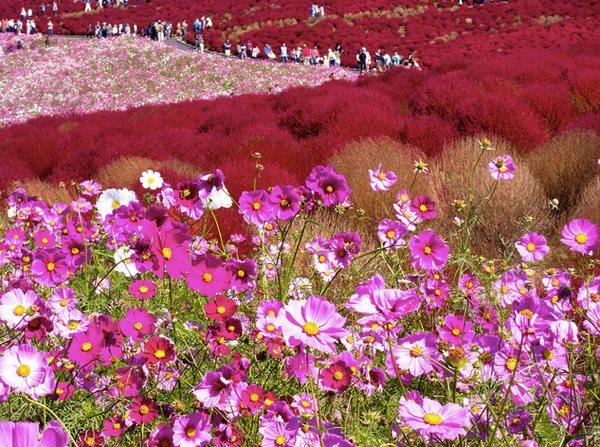 Cosmos and Kochia in October. Photo by: shik--k / Flickr.

Hitachi Park hosts a Kochia Carnival on October 21st. A list of events is here.